Big Lots, Inc. (NYSE: BIG) is a discount retailer trading at a compelling valuation. The company sells a wide variety of merchandise, including food, clothing, furniture, toys, and houseware from 1,432 stores in 48 states. If the stock is not on your radar, it likely should be.

Retail Apocalypse: Not As Bad For Some Sectors

Since the beginning of 2017, department stores like Macy’s (NYSE: M), JC Penney (NYSE: JCP), and Sears (NasdaqGS: SHLD) have been particularly hard hit as a result of increasing competition from Amazon (NasdaqGS: AMZN). This has ultimately weighed heavily on the entire ‘bricks and mortar’ retail sector, including Big Lots. However, it seems the sell-off may have been overdone as we have seen a recent recovery across the sector.

Moreover, discount retailers, like Big Lots, have different dynamics from department stores. According to a Morgan Stanley survey, investors believe that some sectors are "more insulated from the Amazon model. For example, dollar stores, pharma and commercial REITs expected to take longest to be disrupted."

Shoppers will often browse apparel products in a high-end retail store and then buy the product online. Discount retailing is different, the product is already being offered at the cheapest price a shopper is likely to find. While department stores struggle, Big Lots was actually able to grow its 2nd quarter earnings at 29% year-on-year.

In addition to a discount retailing sector that appears to be making a comeback, finbox.io's nine separate valuation models calculate a $64.97 average fair value estimate for the company. This implies a margin of safety of approximately 25%, with none of the nine models showing any downside for the stock. 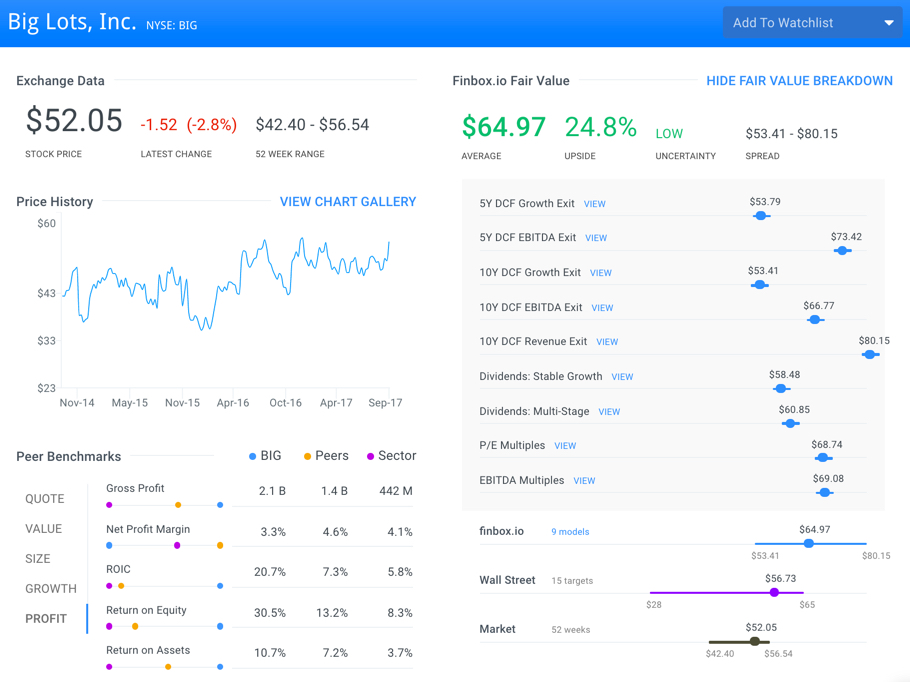 Even more impressive is Big Lots' returns relative to its peers.

The Best Stock Amongst Its Peer Group

When comparing Big Lots to its peers, two things become apparent; it is far smaller but offers far better value. While Big Lots’ market capitalization stands at $2.2 billion, Dollar General, Dollar Tree and Target are valued at $22.1, $20.6 and $32.2 billion respectively. The other small discount retailer is Ollie’s Bargain Outlets (market capitalization of $2.8 billion) but trades at a P/E multiple of 38.7x, nearly three times that of Big Lots' (13.2x). 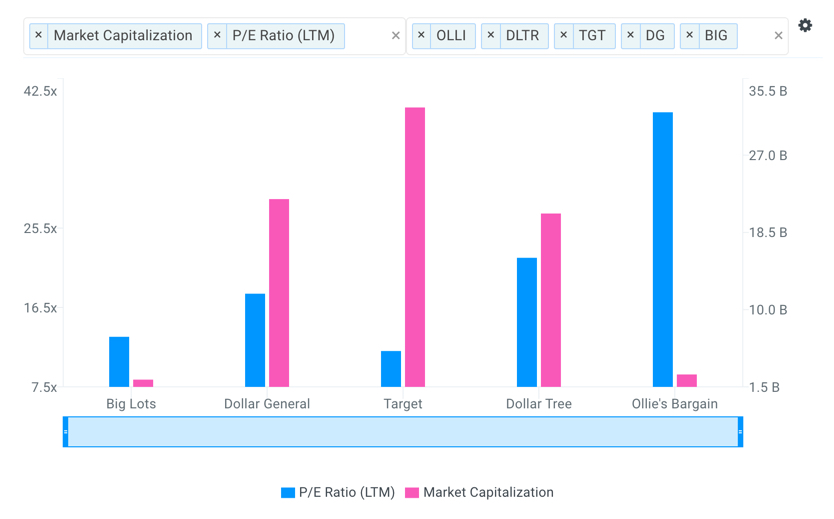 The company also has a relatively low level of debt, something that will become increasingly relevant if the retail sector remains under pressure. 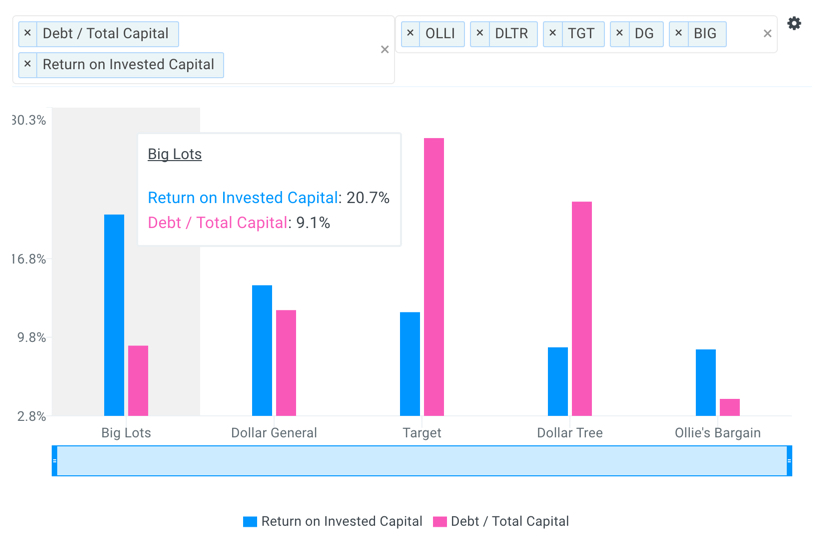 Although the Wall Street consensus 1-year target is less generous than finbox.io’s valuation models, they still see 6% upside for the stock. Several analysts lowered their target prices after poor overall retail sector results in December of last year. However, after Big Lots' reported healthy Q1 and Q2 earnings, many of these analysts upgraded or reiterated their positive ratings or price targets. 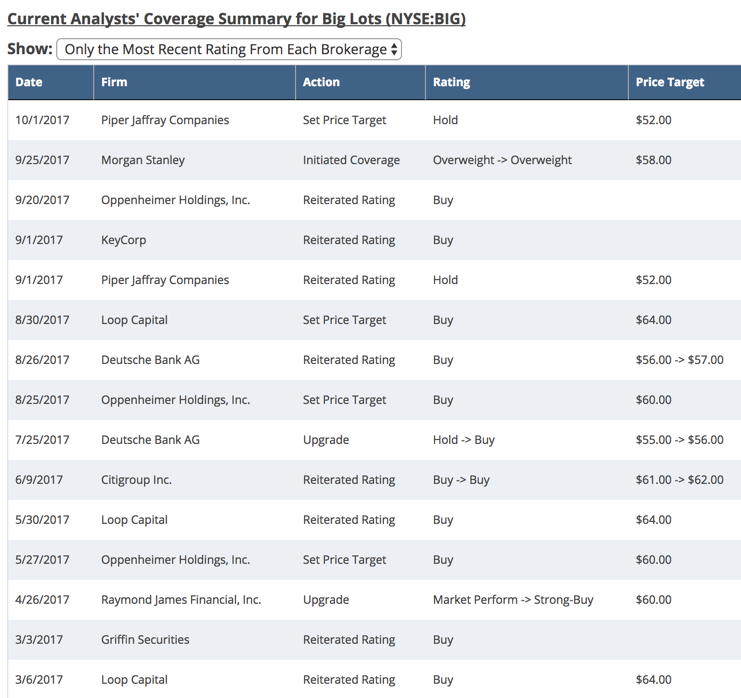 Morgan Stanley notably upgraded the stock to overweight on September 25th, and it is one of their top two picks in the industry. They noted that "investors seem to be under-appreciating Big Lots’ expanding margins, capital return and focus on ownable furniture and seasonal categories."

The number of Big Lots’ stores has fallen from 1,495 in 2012 to 1,432 at the end of 2016. During that period, the company has closed 203 stores and opened 140 reflecting the fact that management has focused on closing its least profitable stores while looking for more profitable locations.

This year the company expects to close fewer stores while focusing on relocating existing stores to more profitable locations. Management does not anticipate opening many new stores, but rather increase penetration through strategic initiatives. This includes furniture financing programs, store redesigns, and a new online initiative. 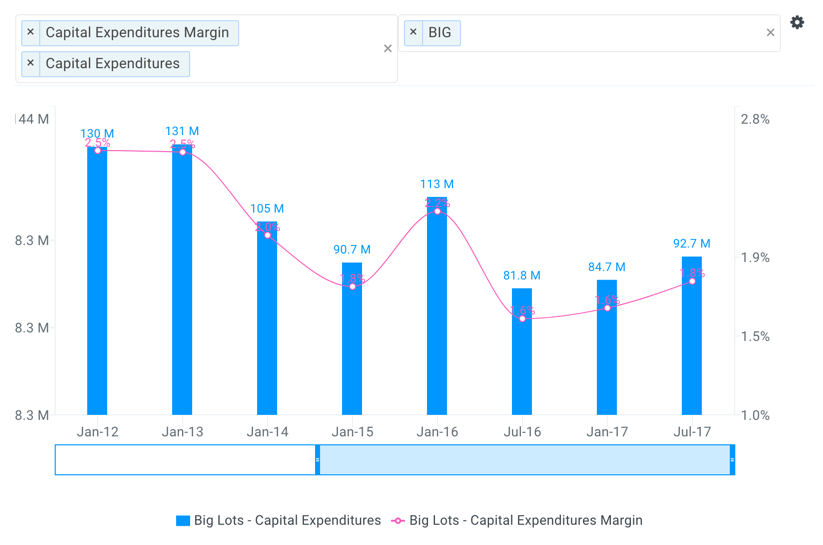 While the company’s capital expenditures have slightly picked up in the last twelve months, this figure remains in an overall downtrend. Its strategy of cutting CapEx while maintaining a level of growth via margin expansion has been prudent given the tough environment for the retail sector. It has ultimately resulted in industry-leading shareholder returns.

Conclusion: One of the Best Retail Stock to Own

Big Lots strategy over the last few years has been to keep debt levels low and focus on its most profitable locations. This has placed it in a strong position given the current environment. The company has managed to expand margins while still competing with the likes of Amazon on price.

Regardless of Big Lot’s top-line growth, an investment opportunity exists in the near to medium term with limited downside. Furthermore, if we see a sustained recovery for the retail sector overall, Big Lots may well be the best stock to ride that wave. It is also one of the best retail stocks to own even if the sector continues to struggle.

Note this is not a buy or sell recommendation on any company mentioned.
Photo Credit: Cleveland.com