Why Quanta Services Inc (NYSE: PWR) Has A Safe 20% Upside

Selecting stocks is a tough process in the best of times, but when the length of the U.S. economic expansion is nearing a record, investors need to look at how a company will perform in good times and bad. Different industries and companies fare better across the stages of the economic cycle, where stocks with lower risk, fewer ties to discretionary income, and less hype will outperform when the economy sours. Forecasting is more of an art than a science, but there are indicators that can be helpful in determining these turning points.

Understanding when the economy might turn is necessary when analyzing companies’ growth plans. Will there be time if management requires five years of continued expansion to meet its goals or clean up its balance sheet,? There are two indicators that can help answer this question.

The first flag is based on the outlook of economists. While market-based indicators are preferable, the Wall Street Journal’s Survey of Economists provides great context, and its trend can help confirm market winds. The chart below from February’s survey indicates recession fears over the next year are low. Recent tax reform has pushed out expectations of any recession as the WSJ noted in January: “More than 90% of economists said the tax cuts would increase GDP growth over the next two years, similar to their thinking in earlier months when the details of the legislation were still in flux.” 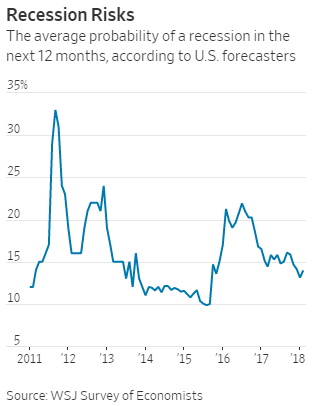 Another warning flag is the start of a bear market, a 20%+ drop in prices. Supporting this legend, a CNBC study found: “On average, bear markets give investors about eight months of warning that a recession is on the way.” The indicator does not have a perfect record, but is still a good rule of thumb. Recognizing the start of a bear market is very tough but possible. An indicator that can help with identifying the turning point is margin debt.

Record margin debt is seen as a sign of high investor enthusiasm, often noted as a time of greed in the investor behavior cycle. Following greed is panic and bear markets. High margin debt, coupled with little investor cash on the sidelines, removes price support in downturns. As charted below, peaks in margin debt generally precede market tops. Despite the market correction in January and February, margin debt has yet to turn. 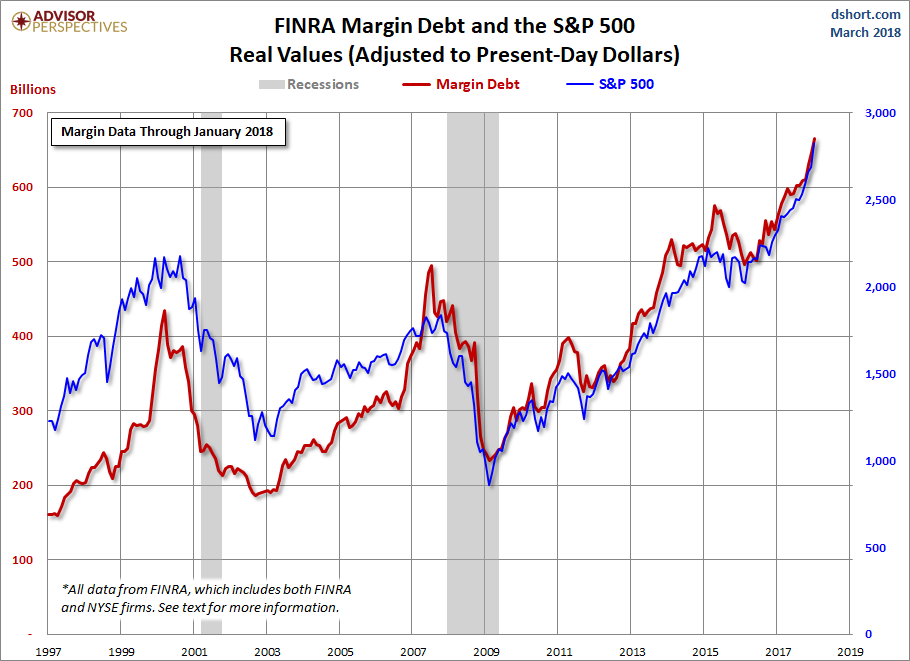 The indicators are not flashing red, but the recent volatility and Federal Reserve hawkishness indicates concern over the economy. When the market is anxious, investing in a less volatile industry can benefit a portfolio.

Bill Gates recently explained that another financial crisis is a “certainty.” And when a recession hits, retailers will enjoy no floor on sales. Even those that deal in consumer staples, like grocery stores, will see margins squeezed as shoppers cut back and shift habits. However, infrastructure companies operate a little differently. While growth can take a hit as new projects are delayed, infrastructure must be maintained. These companies have a stable base of revenues from long-term master agreements with utilities to maintain and service electrical grids, pipelines, or telecom equipment.

Similar to required maintenance, the replacement of dangerous and outdated infrastructure cannot be delayed. Cities are in dire need of replacing cast iron and bare steel distribution pipelines, which is expected to generate demand for the next decade. Electrical grids have been attacked physically and digitally, and are susceptible to more severe weather from global warming, which has led to necessary spending on the “hardening” of the grid.

This revenue base makes infrastructure companies a good choice in bad times, but they can also profit during an expansion. Technology and innovation are both powerful drivers. On the electrical power side, renewable energy requires both improvements to the electrical grid and construction of new power sources. Transmission and distribution spending continues to reach all-time highs and the spending estimates shown below highlight continually improving expectations. 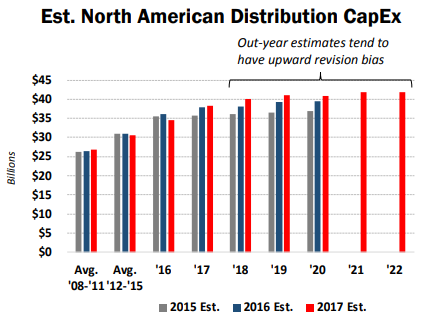 North American energy production has also benefited from innovation, especially in the U.S. with the ability to tap shale deposits. The recent advent of fracking has required new infrastructure in non-developed areas. Despite OPEC trying to drive down prices to squeeze these new producers, production from oil and gas wells has bounced back since bottoming in June 2016. OPEC is seeing cracks in its resolve, with the Wall Street Journal noting a schism between Iran and Saudi Arabia who would prefer higher prices. The expectation is that if oil prices get back to $70, U.S. production will skyrocket. Non-traditional shale and oil production requires spending on new infrastructure. Pipelines are needed in lieu of more expensive rail shipping when prices are low, and higher oil prices demand more production and building. Either way energy infrastructure profits.

In North America, there is one company that is the leader in these infrastructure spaces. Quanta Services Inc (NYSE: PWR) is the number one provider of infrastructure solutions for electric power and oil & gas production.

Quanta Services is an interesting play for timing the peak of the expansion. If a recession is years away, the company has plenty of upside as discretionary spending on big projects continue. If the downturn comes sooner, its size and market leadership in two distinct industries generate consistent cashflow from long-term maintenance contracts. This stability is highlighted by its beta of 0.65, nearly half that of its industry peers and the Industrials sector. 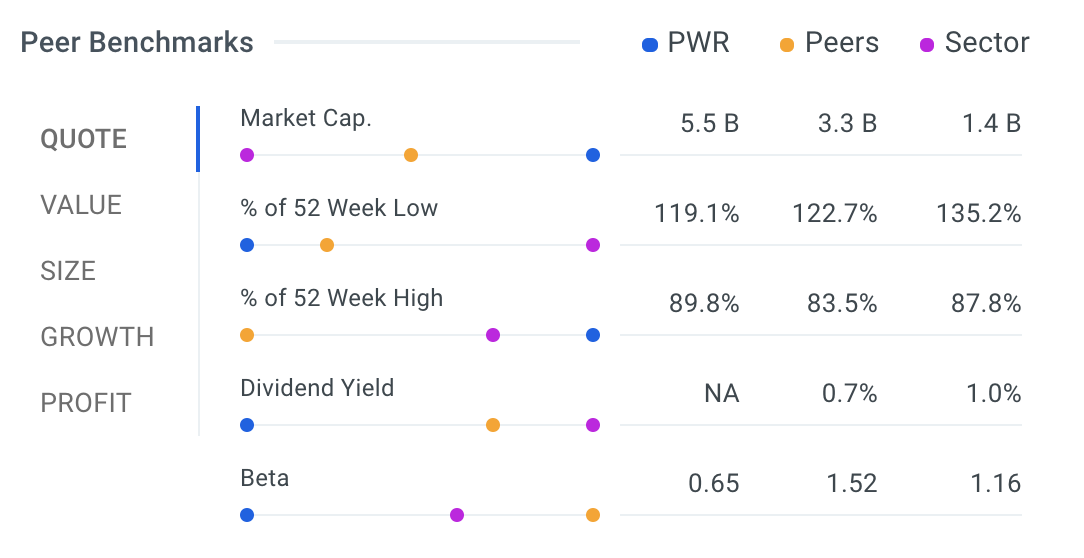 Quanta, across its 60+ subsidiaries, can provide both the electric and energy industries with help at every point of the life cycle of a project, from design to replacement. One stop shopping and the crucial stability of its skilled construction labor force are very beneficial as projects get larger and more complex. Even more helpful, it retains leadership when acquiring companies, allowing them to operate entrepreneurially, but also maintaining important personal relationships with the industry.

The firm tilts towards the electric power industry where it generated 59% of its revenue in 2017. This mix is expected to change going forward as Quanta is making a push into the telecommunications infrastructure market, which has a large overlap in similar competencies.

A deeper look at revenue highlights the reliance on the U.S. and Canada, which produce 95% of sales. The company is emphasizing its focus on growth in Latin America and Australia, but the impact is currently small. Quanta generated 51% of its revenue from new construction last year, leaving it more susceptible to market fluctuations. However, long-term agreements and other ad hoc maintenance and repair revenue will be safe in a downturn. Adding to the protection of its revenue is that its top customer is responsible for less than 10% of sales, and its top ten generate 36% of sales.

No Dividends, but Heavy Buybacks

Even after funding its capex and acquisitions, the company has been able to spend 50% of its cash since 2014 on repurchasing more than 32% of its stock float. Since it does not pay a dividend, this focus on the return of capital to shareholders is important. It also has a major effect on goosing earnings per share, but in this case, without loading the company up with debt.

Quanta has enjoyed better operating margins in electric power, and expects them to improve in the face of 5.4% topline growth (red bars below). Guidance for oil and gas is for 10% revenue growth (black bars), and an operating margin that will beat the prior three years. 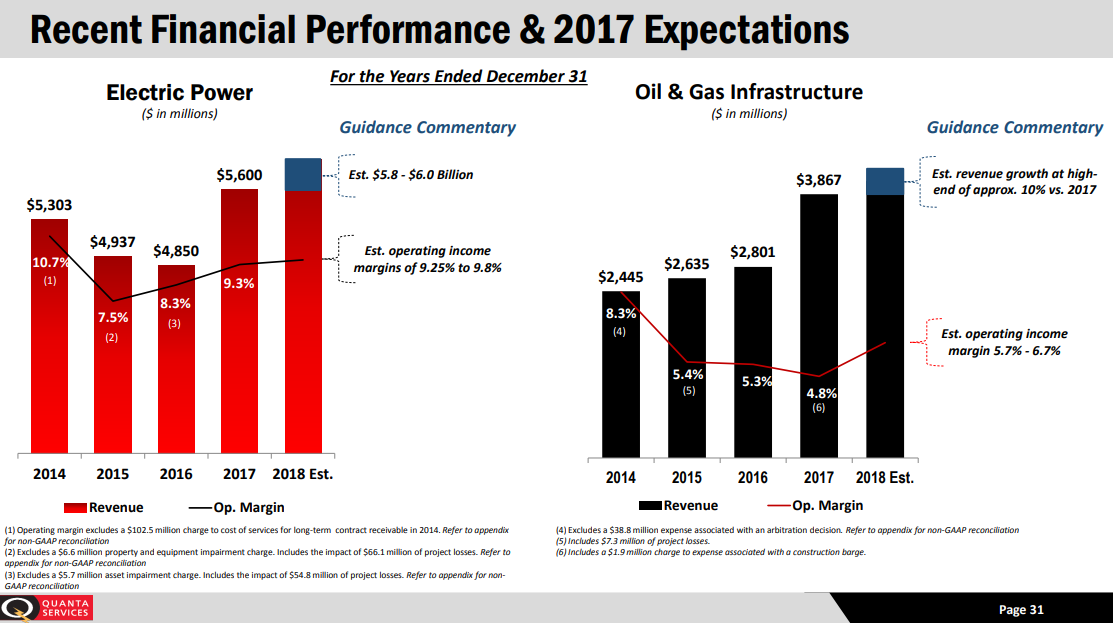 Wall Street analysts are looking for EPS to grow 29.4% in 2018. They walked down EPS estimates for Q1 on updated company guidance, but expectations for the full year remain strong. Its guidance for 2018 is for EPS of $2.40 to $2.80, and Wall Street consensus is just below the midpoint at $2.55. Wall Street should have some faith as Quanta generated record revenue and order backlogs in 2017. The company has only beat estimates in two of the last four quarters, but looks to have done a good job of managing expectations for Q1.

PWR’s price has had a pretty reserved last twelve months with a drop of -4.5%. However, as noted earlier, expectations are high. Matching the expectation for 29.4% EPS growth, Wall Street analysts see Quanta’s stock jumping 30%. Confirming the analysts’ upside is finbox.io’s quantitative fair value price which is a non-biased composite of 10 models. The mix of DCF analyses and multiples calculate a potential upside of 19.9%. 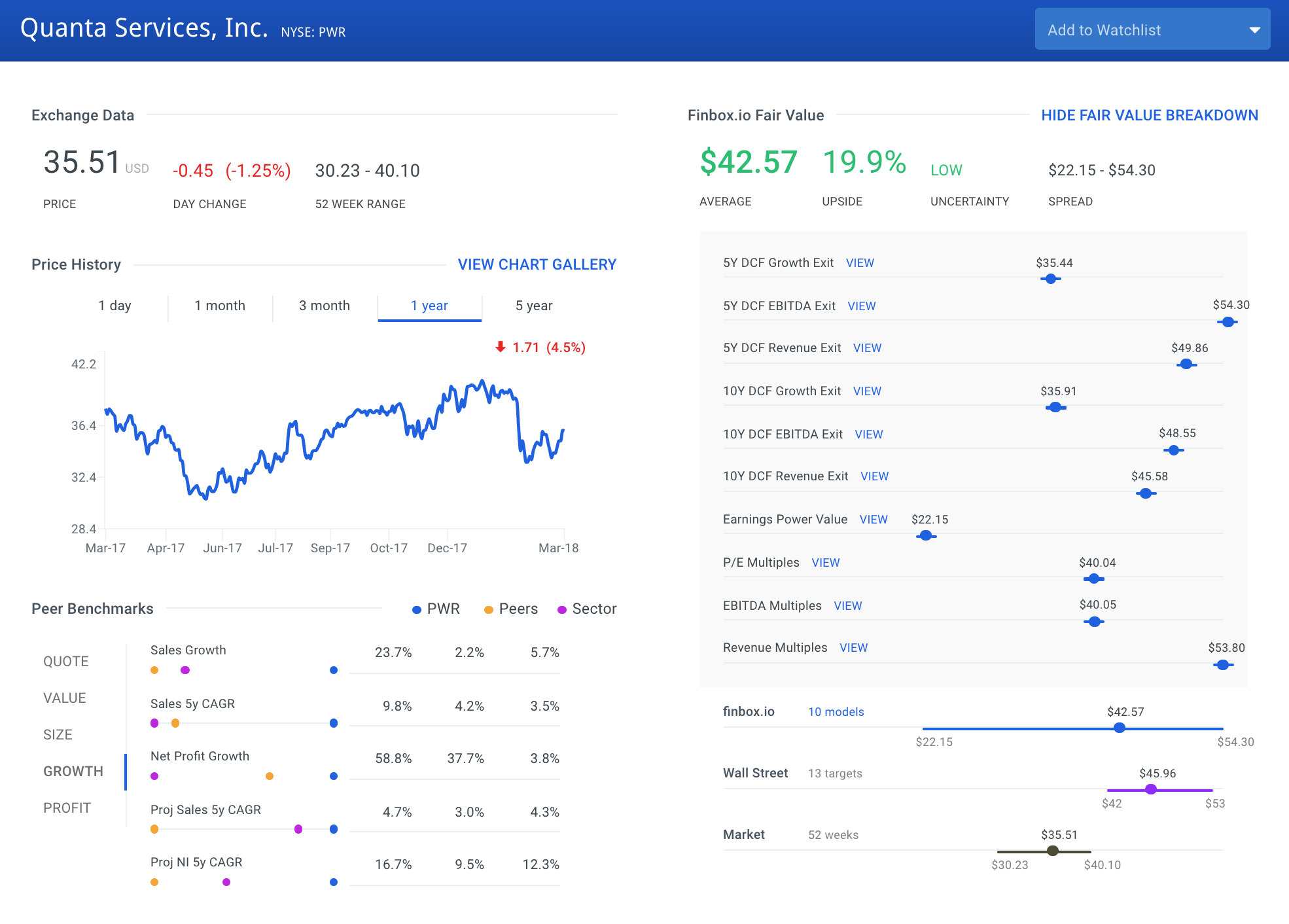 The firm compares positively across the board in growth metrics relative to the peer and sector averages. Projected five-year annual growth of net income is 16.7% compared to a peer benchmark of 9.5%. Topline growth has more than tripled its peers and sector.

Management appears to have put Quanta in a good position to succeed. It has better net profit margins and return on assets than its peer average. At 20.5%, it has the lowest debt/equity ratio of its peers, indicating a more shock-resistant balance sheet. 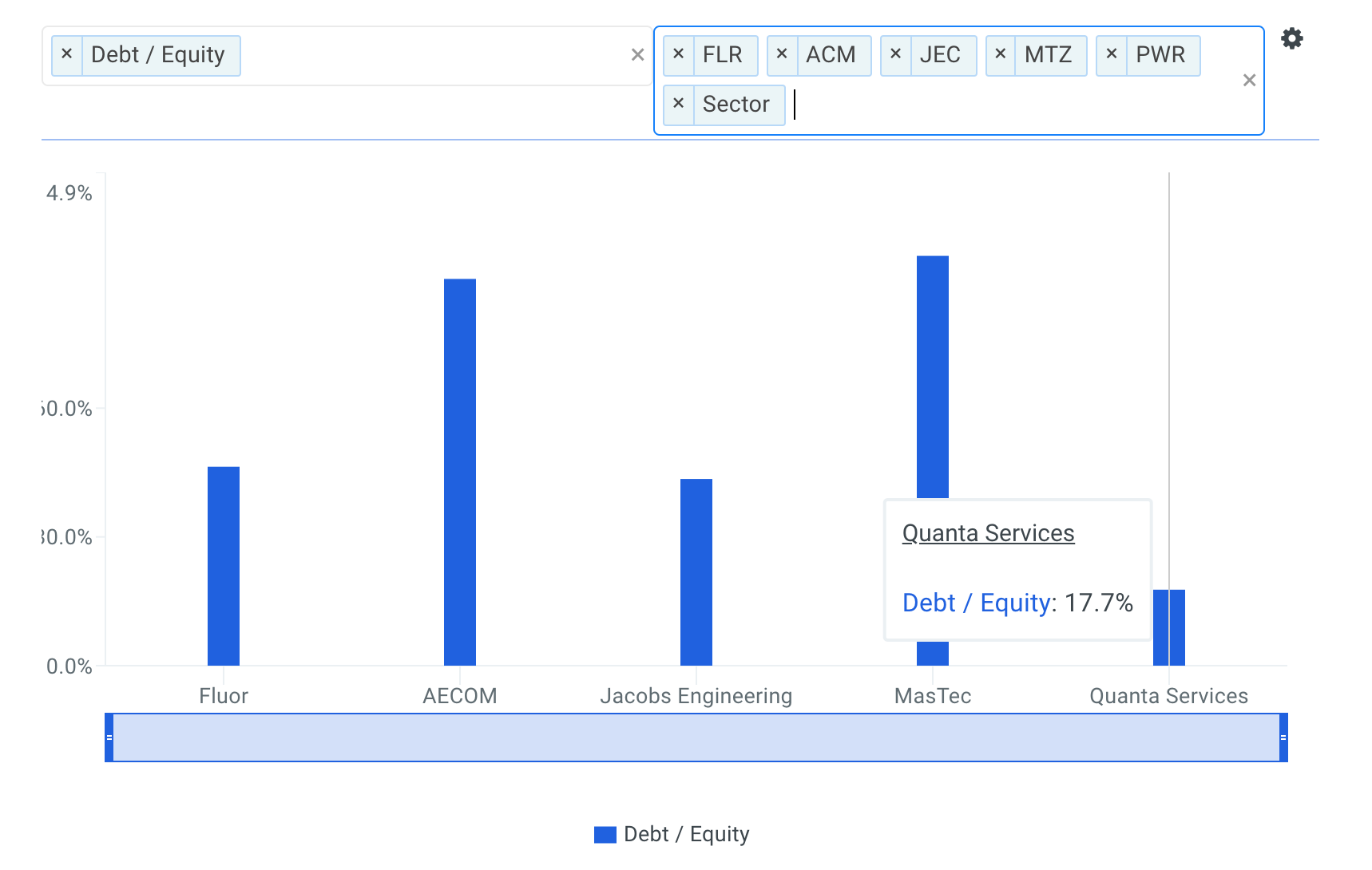 In short, Quanta Services has a good management team, a diverse portfolio of services, industry leadership, Wall Street analyst support, and superior current and forecasted growth metrics relative to peers. This is an undervalued stock that will likely outperform moving forward.

The company has all of the above going for it, along with a healthy balance sheet, aggressive stock repurchase program, and investments in synergistic growth opportunities in telecommunications infrastructure. Both qualitative forecasts from Wall Street and quantitative estimates from finbox.io agree on at least 20% upside. Investors would be wise to take a closer look at Quanta Services shares.