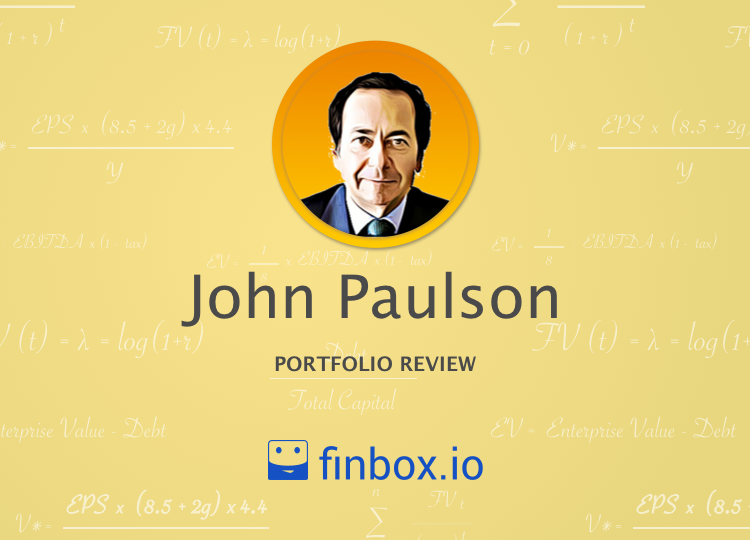 Why Outside Investors Are Fleeing: John Paulson's 6 Worst Stock Investments

The Greatest Trade Ever

John Paulson is best known for his 2007 bet against the U.S. housing market where he reportedly earned over $4 billion personally on one trade. Gregory Zuckerman, a reporter at the Wall Street Journal, went on to write an entire book about the trade titled: The Greatest Trade Ever: The Behind-the-Scenes Story of How John Paulson Defied Wall Street and Made Financial History.

Paulson is not considered a mortgage or real estate expert but rather specializes in "event-driven" investments, most notably merger arbitrage. In fact, he was a relatively unknown fund manager prior to foreseeing the subprime mortgage crisis.

In 1994, he founded his own hedge fund, Paulson & Co., with $2 million and one employee. In addition to merger arbitrage, he frequently made other event-driven bets in relation to spin-offs and proxy contests. This is where Paulson's expertise truly lies after working nearly a decade in Bear Stearns' M&A division. By 2002, his fund had quietly grown to over $500 million but it took "the greatest trade ever" to solidify himself as a hedge fund titan.

However, the best times may be in the rear view mirror for Paulson & Co.

At its peak, Paulson's hedge fund managed $36 billion in 2011. But now his firm oversees only $10 billion which lead to the New York Times writing a piece on how he's fallen from hedge fund stardom. Candidly, Paulson & Co. has performed so poorly in the last few years that outside investors have really had no choice but to swallow their losses and flee.

Paulson's dismal performance got more attention than it otherwise would have when (then presidential candidate) Donald Trump filed his financial disclosure in July 2015. The document showed that he lost $1.5 million (-40% on investment) in the Paulson Advantage Plus fund. Losses from this flagship fund continued with the New York Times citing the Advantage fund has consecutively recorded double-digit losses over the last three years. In a letter to investors, Paulson called 2016 “the most challenging year since inception.”

Outside investor money now accounts for less than 20% of the firm's assets under management (AUM) with insider money (Paulson and employees) making up more than 80%. Now at 61, the hedge fund manager is trying to make a comeback and has opened three new funds in the last two years.

So would you choose to invest with him? The following is a summary of his current investment portfolio which may help answer that question.

On November 14, 2017, Paulson's firm Paulson & Co. filed their quarterly Form 13F regulatory filing. I reviewed the 13F filing to get a sneak peek into his recent activities.

Paulson & Co.'s stock portfolio totals nearly $5.5 billion according to the latest filing. The list value of stock holdings is down a miserable -25.1% when compared to the last quarter. As a benchmark, the S&P 500 was up 3.9% over the same period. Yikes!

Additionally, Quarter-over-Quarter Turnover (QoQ Turnover) measures the level of trading activity in a portfolio. Paulson & Co.'s QoQ Turnover for the latest quarter was 25.7%, so he traded a significant portion of his portfolio this quarter. However, not to the firm's benefit.

The ranking table below lists the stocks in Paulson & Co.'s portfolio have performed poorly so far this year:

The six positions above represent 7.9% of the hedge fund's total portfolio as of the latest filing. Unfortunately for Paulson's investors, these six potions represented 16.7% of his portfolio at the beginning of the year.

The Ideas section of finbox.io tracks top investors and trending investment themes. You can get the latest data on the holdings discussed here.