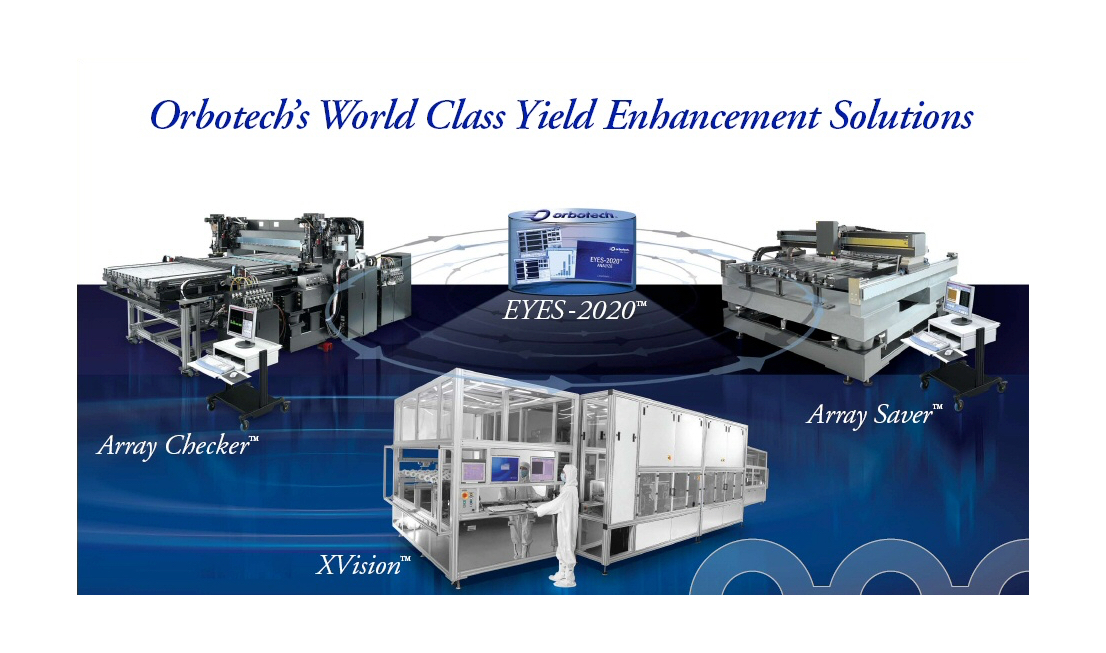 Here's Why Orbotech Can Trade Much Higher

Orbotech (NasdaqGS: ORBK) released their results for the second half yesterday, and the market clearly liked the numbers. The company reported EPS of $0.67 against an average forecast of $0.60, and revenue of $210 million, $5 million ahead of analyst estimates.

But there could be plenty more to come in the next few years. Orbotech, with a market capitalization of $1.7 billion, is a relatively small company in the sweet spot of the semiconductor boom.

Orbotech is based in Israel, but operates globally, selling products that enhance the yield of semiconductor manufacturing processes. These solutions help manufacturers eliminate waste and improve margins. Semiconductor manufacturers have been investing heavily in capacity over the past few years, but as that capacity comes online, prices will begin to come under pressure. These manufacturers will be looking for opportunities to increase their margins, and this is exactly why Orbotech is well positioned right now.

They say that in a gold rush you shouldn’t mine for gold, but rather sell picks and shovels. Orbotech is a ‘picks and shovels’ business perfectly positioned within the cash flush semiconductor business.

Despite a strong move over the past two years and its 4.7% run follow earnings yesterday, Orbotech is still trading 16% below fair value. Finbox.io values the company using ten models, eight of which see upside in the stock. The average 1-year price target from seven Wall Street analysts also shows nearly 10% upside. 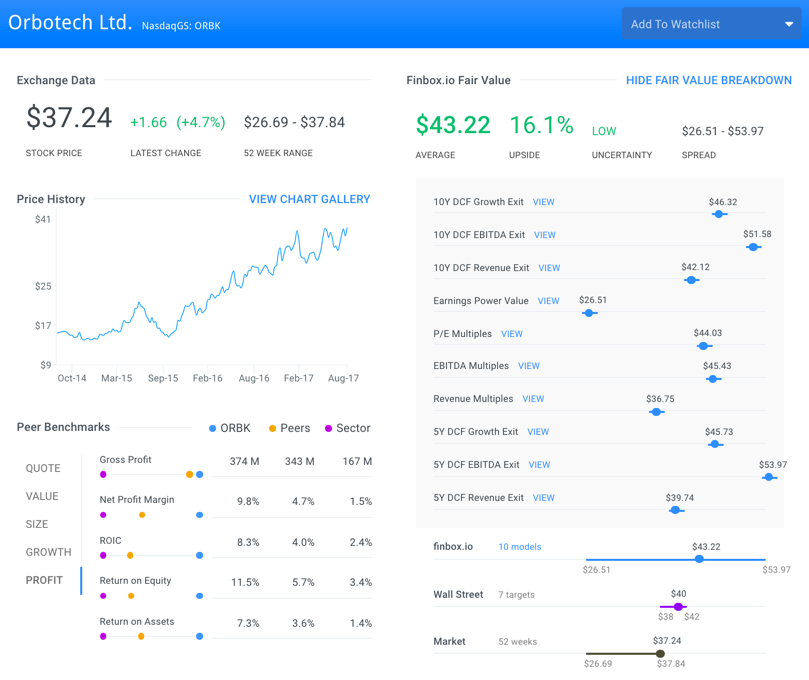 When comparing valuation multiples, Orbotech is in the middle of the pack relative to its peers. Its trailing P/E is 22.7x after 12-month earnings growth of 30% - so the trailing PEG ratio is below 1.

And, when ranking Orbotech and its peers using EV/EBITDA it looks even cheaper. 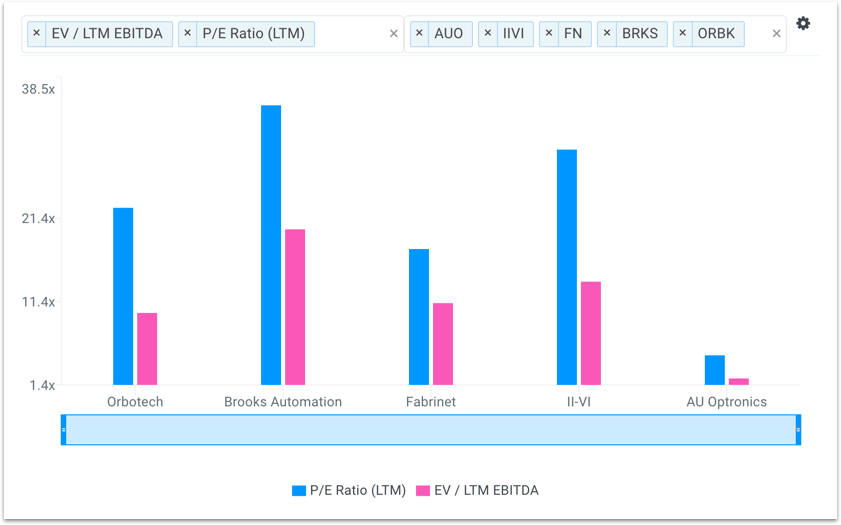 Analysts are expecting earnings growth of 20% a year for the next five years. Yesterday’s results reiterate that the company is on track to hit that target for fiscal year 2017, implying a forward P/E multiple of 11.5x. That’s a bargain for this high growth tech stock.

One reason Orbotech trades at a discount to many of its peers is that its performance has historically been a little lumpy. Whether a contract gets booked in one quarter or the next can have a dramatic impact on its reported performance. However as the company grows, their performance should become less lumpy with more individual contracts smoothing the curve. 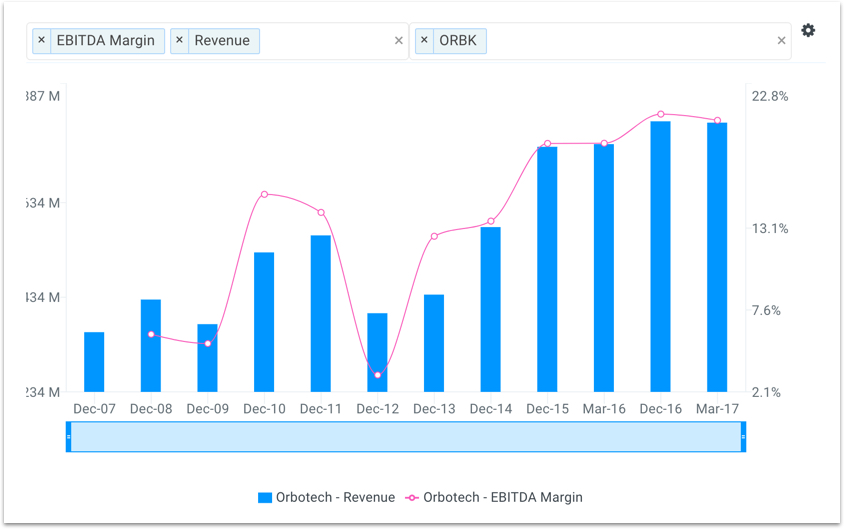 The gross margin in the second quarter was 46.8% (Q2'16 was 45.9%), and management expects this to expand further in the second half of the year. This should help improve the company's already impressive return on invested capital of 8.3%. Among its peer group, only Fabrinet has been able to create more value for all its stake holders. 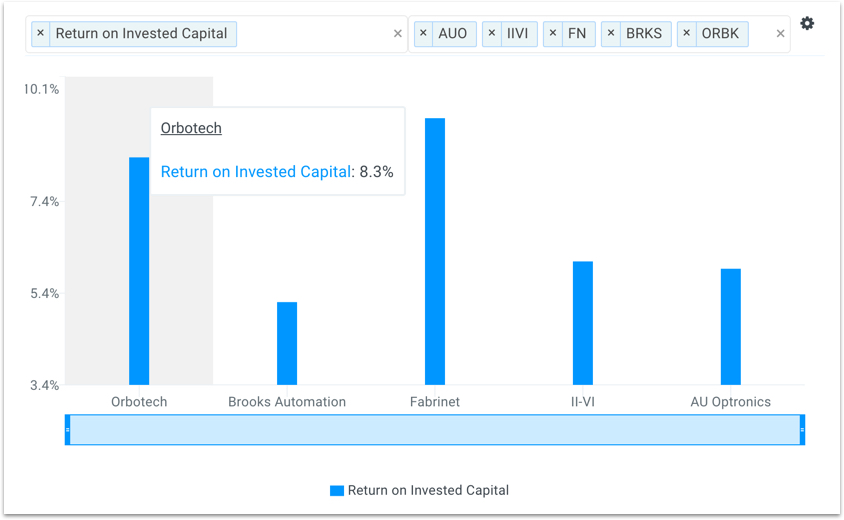 Orbotech is a quality growth stock trading at a more than reasonable price. Investors can also expect the company to be resilient in any market downturn. The tougher the business environment becomes, the more its customers will need its products. Furthermore, Orbotech has customers with big pockets, Apple (NasdaqGS: AAPL) being one.

Semiconductor manufacturers have been focusing their efforts on increasing capacity as a result of memory companies transitioning their technology to more advanced nodes. The next step for these manufacturers will be to increase the efficiency processes of the newly created capacity. This is where Orbotech can help and why investors may want to start taking a closer look at the stock.

Note this is not a buy or sell recommendation on any company mentioned.
Photo Credit: Seeking Alpha