Why Alibaba’s Stock Could Still Have Upside

Payments is one of the fastest-growing market segments today, with mobile technology giving consumers the flexibility to make purchases more quickly and seamlessly than ever. And the technology has nowhere near peaked, with tech plays Apple (NasdaqGS: AAPL) and Google (NasdaqGS: GOOG) as well as niche players such as Ali Pay and PayPal (NasdaqGS: PYPL), not to mention banks jumping in as well such as JPMorgan’s (NYSE: JPM) Chase Pay, continuing to innovate and incentivize consumers from around the world to use their payments product.

Clearly, there are many ways for investors to play the payments space. But the full scope of such opportunity may have yet to surface, giving investors the opportunity to possibly get in early on a rising fintech trend.

China’s e-commerce leader Alibaba (NYSE: BABA) on February 1st announced it was taking a 33% equity stake in its payments affiliate, Ant Financial Services Group. Ant already dominates China as a mobile payments provider, which has caught on like wildfire in the country, and now it’s looking to expand across India, Japan, Korea and more. Alibaba with its recent equity investment is poised benefit from that growth, especially if Ant decides to IPO.

The pair has many synergies when combined that strengthen each other’s market position. For example, Ant’s leadership position in mobile payments via the Alipay digital wallet and Alibaba’s strength in e-commerce and brick-and-mortar retail. Both companies are well positioned in this surging market.

Based on seven unique models, finbox.io calculates a fair value for Alibaba stock of $193.65 per share compared to the current price of $187.31. That’s an upside potential of 3.4% with medium level uncertainty. 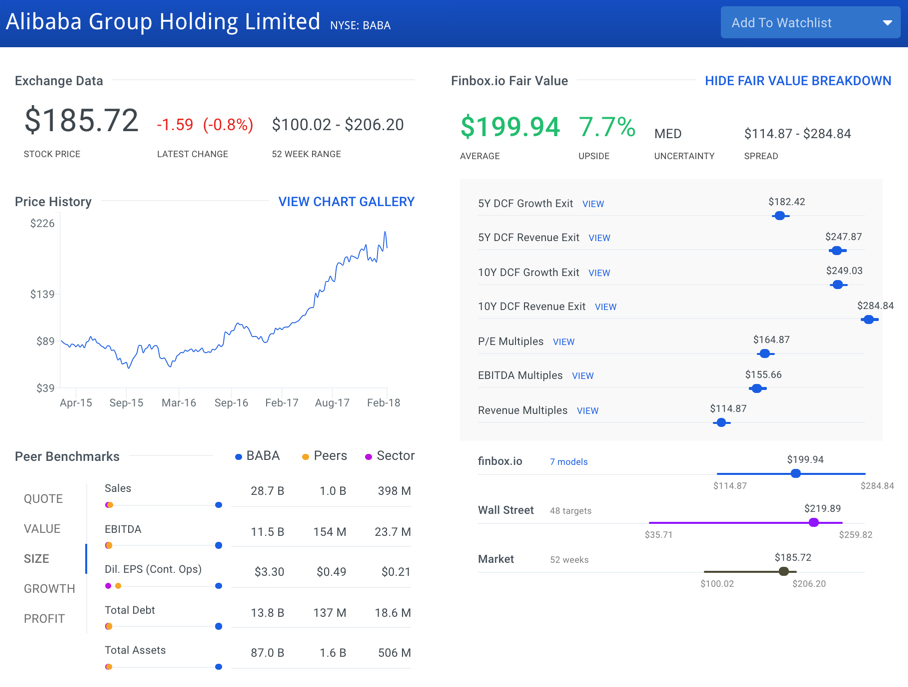 Alibaba’s stock has been on a tear of late, with shares up 87% over the past year. This might put some fear in investors that there’s limited upside going forward.

Furthermore, China-based Ant’s growth has been stifled in the United States by the Trump administration. Ant recently tried to acquire Dallas-based money transfer company MoneyGram, only to have the deal squashed by regulators. The deal was nixed amid security concerns, a theme that has been pervasive in the current administration. While it may seem more a blow to the archaic MoneyGram than to Ant Financial, the deal would have given Jack Ma, who is also at the helm of Alibaba, a footprint in the U.S. market. This would have been a competitive advantage over the likes of Tencent’s WeChat.

Alibaba is in the center of the fintech movement, and it just gained greater exposure to the mobile payments market segment via its equity investment in Ant Financial. Even as the e-commerce market becomes more crowded, Alibaba is looking to other segments for growth, which in addition to mobile payments include the cloud and brick-and-mortar retail.