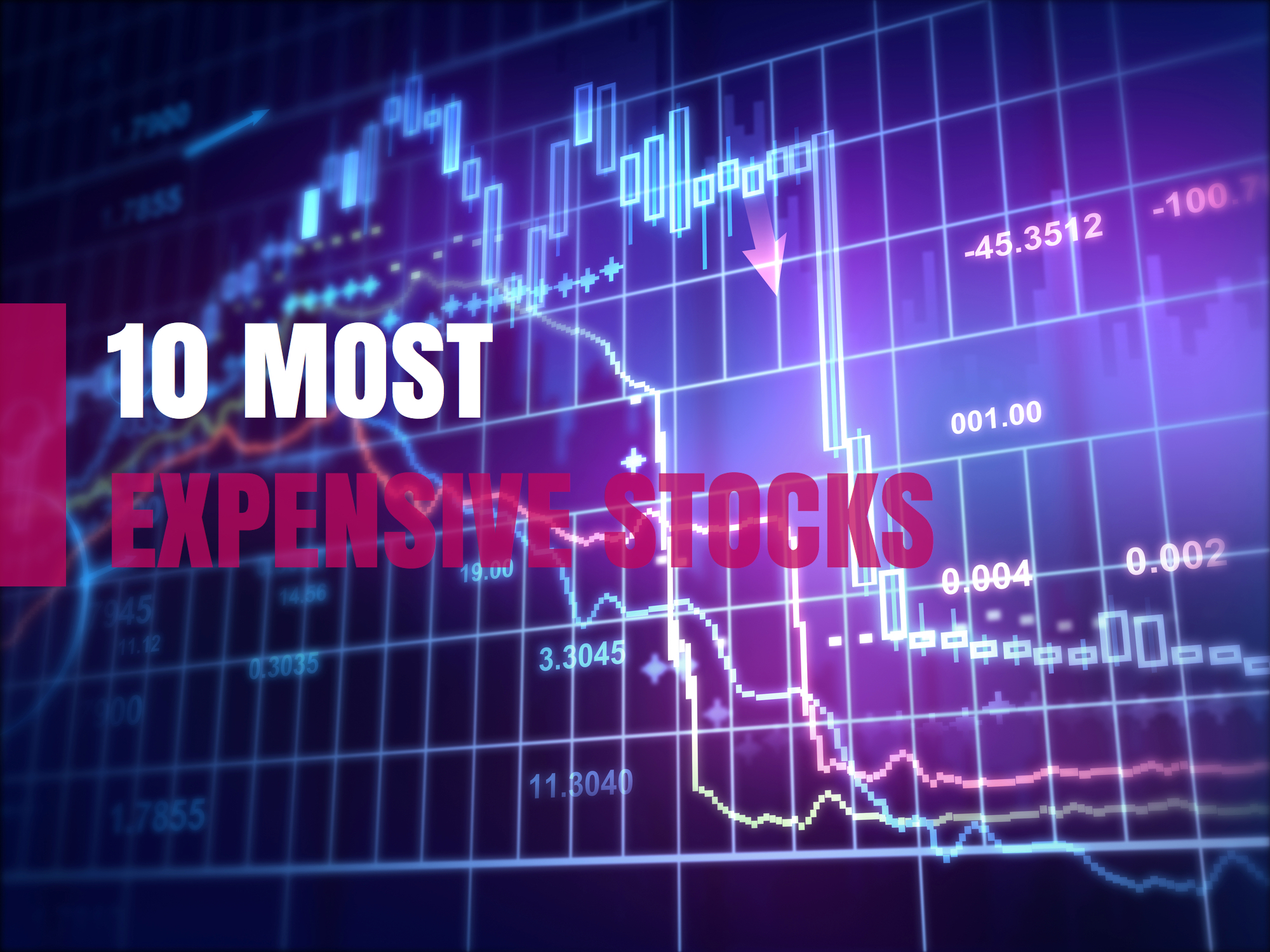 This is not a widely held view considering the Russell 1000 Growth index (IWF) has returned 32.2% over the last year while the Russell 1000 Value index (IWD) has returned only 14.7%. Furthermore, high flying Netflix (NasdaqGS: NFLX) jumped to another all-time high after reporting Q4 numbers on Monday after the bell. Total subscriber growth increased 25.4% YoY which helped send the company's market cap to over $100 billion. The chart below highlights Netflix amazing growth as well as its -$510 million cash burn in Q4 (-$2 billion in fiscal year 2017). 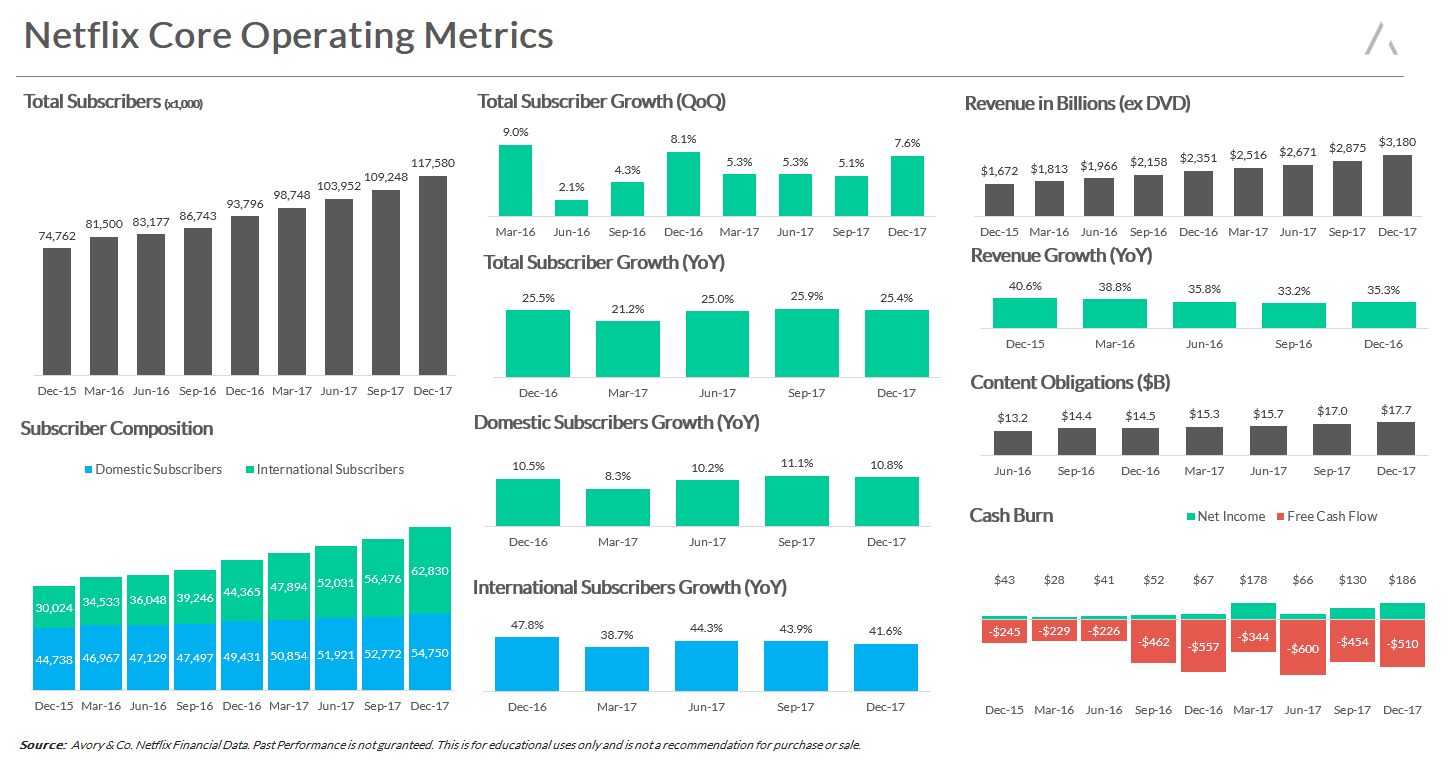 Netflix is a timely reminder of just how much momentum these growth stocks continue to have in this market, no matter what valuation multiple they trade at. And while research suggests owning high quality value stocks significantly outperforms in the long-run, high quality growth stocks (such as Netflix) still have steam. Therefore, I decided to find companies that may be masquerading around as high growth stocks but really are not to be trifled with.

In order to find these pricey stocks, I downloaded the list of S&P 500 constituents and then used finbox.io's spreadsheet add-on to find which companies had the following:

ProLogis (NYSE: PLD) is a global leader in logistics real estate with a focus on high-barrier, high-growth markets. As of September 30, 2017, the company owned or had investments in properties and development projects expected to total approximately 687 million square feet in 19 countries. Prologis leases modern distribution facilities to a diverse base of approximately 5,200 customers across two major categories: business-to-business and retail/online fulfillment. 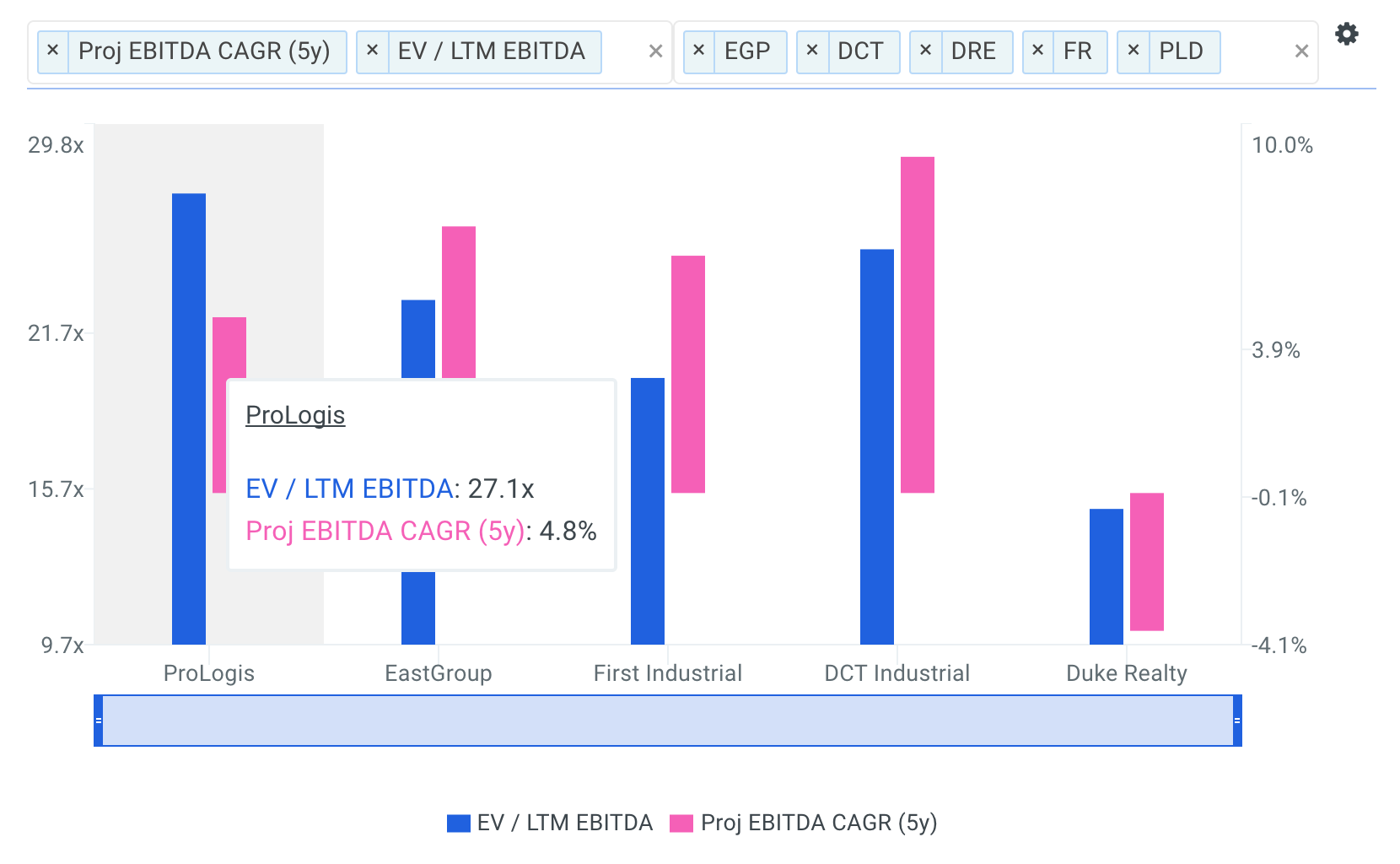 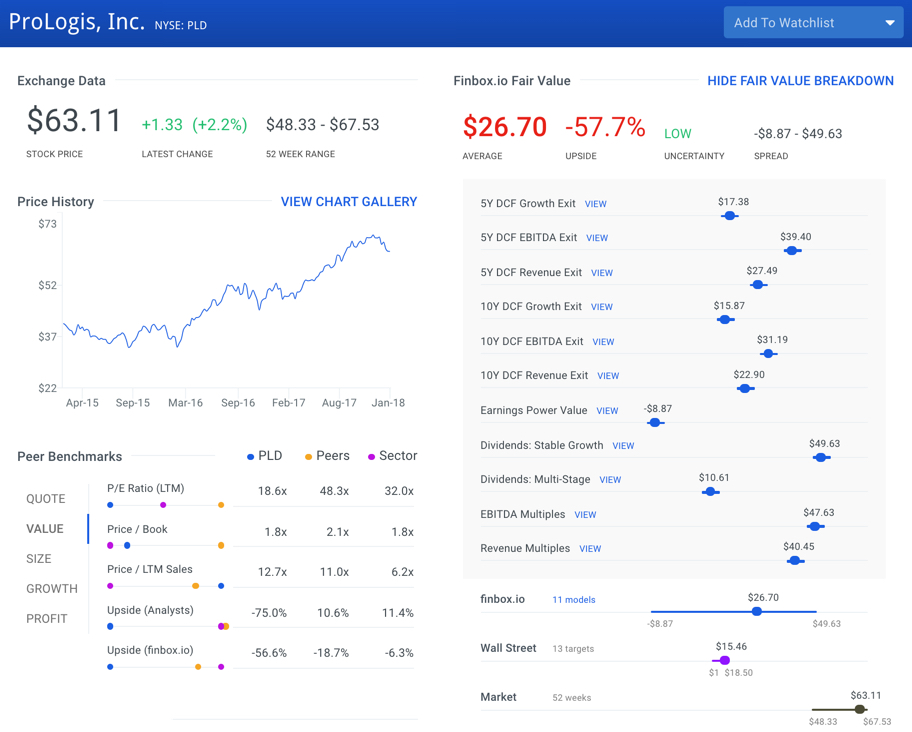 Shares of the company are up 21.1% over the last year. The stock last traded at $63.11 as of Monday January 22 and eleven separate valuation analyses imply that there is significant downside relative to its current trading price. 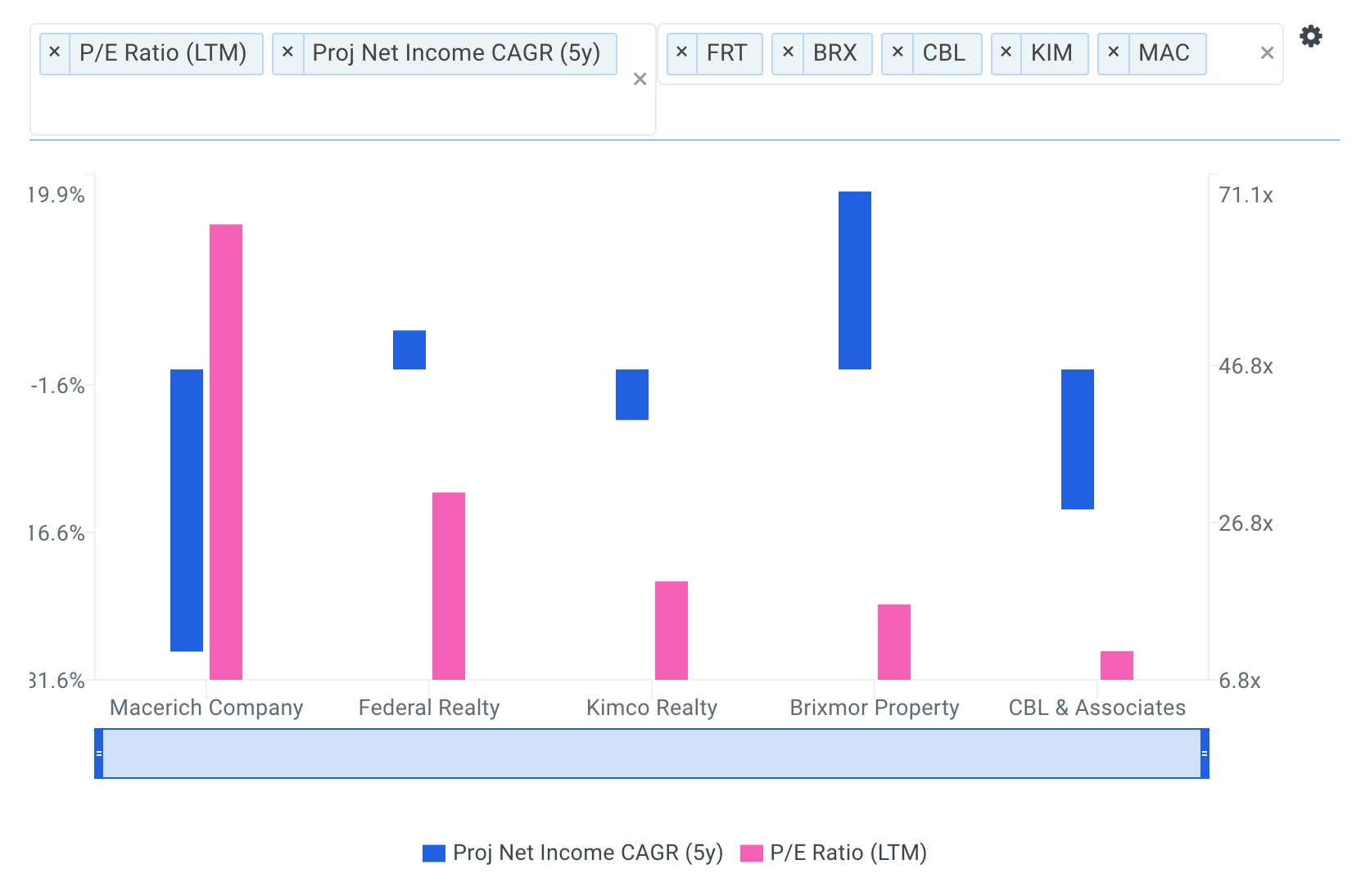 The company appears to be expensive on a future cash flow basis as well. 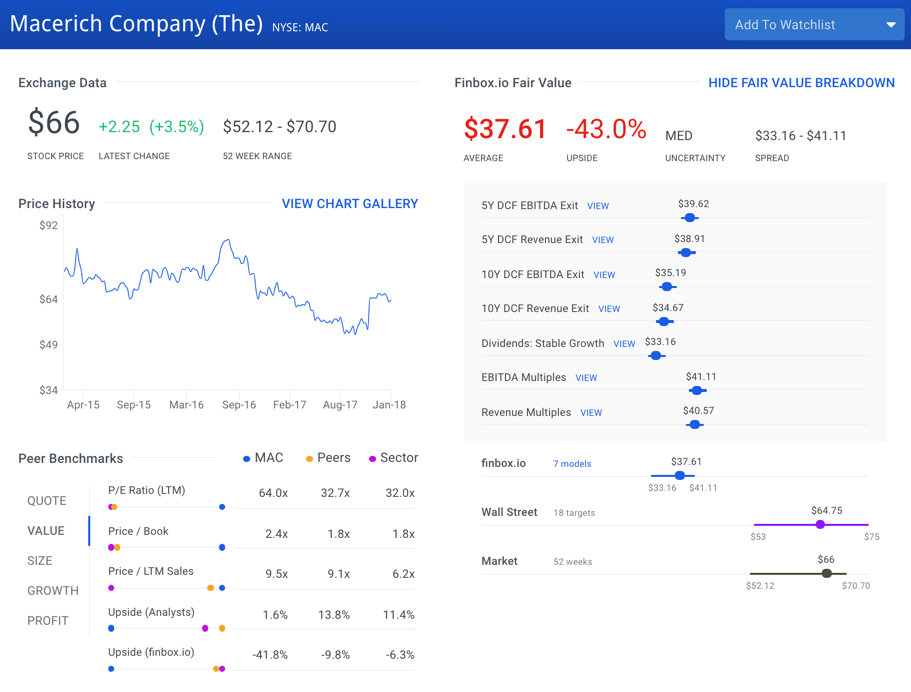 Shares of Macerich are down -4.4% over the last year and finbox.io's fair value estimate of $37.61 per share calculated from seven cash flow models imply -43.0% downside.

The 10 Most Expensive Stocks In The S&P 500: Align Technology

Align Technology (NasdaqGS: ALGN) manufactures and markets a system of clear aligner therapy, intra-oral scanners, and computer-aided design and computer-aided manufacturing (CAD/CAM) digital services. The company was founded in 1997 and is headquartered in San Jose, California. 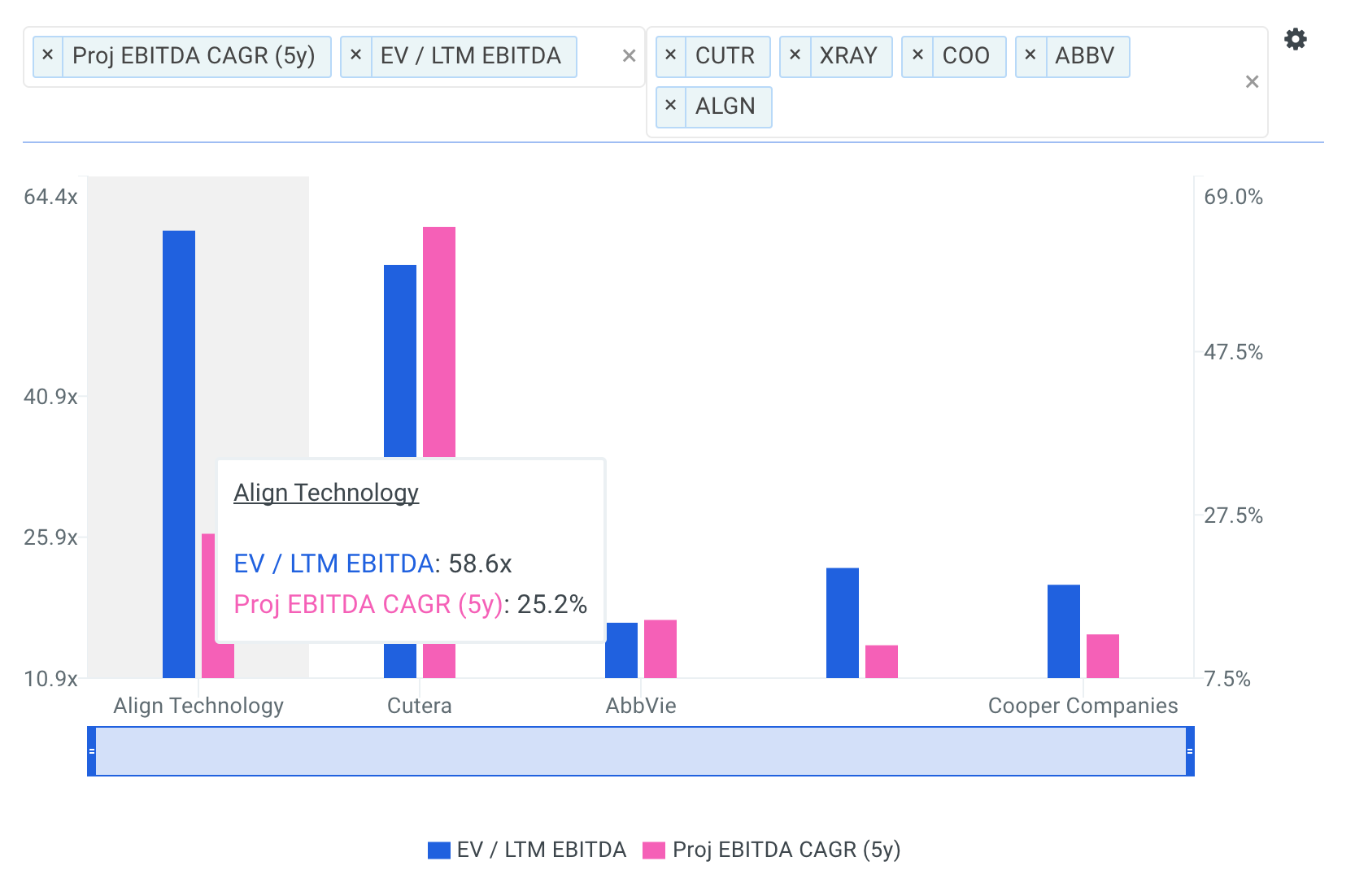 Align Technology's LTM EBITDA multiple of 60.1x is above COO (20.8x), XRAY (22.7x), ABBV (16.6x) and CUTR (54.9x). Cutera's multiple is only slightly below Align Technology's but Wall Street analysts project that the former will grow its cash flows by 62.8% annually over the next five years. This is well above Align Technology's forecasted five-year EBITDA CAGR of 25.2%. 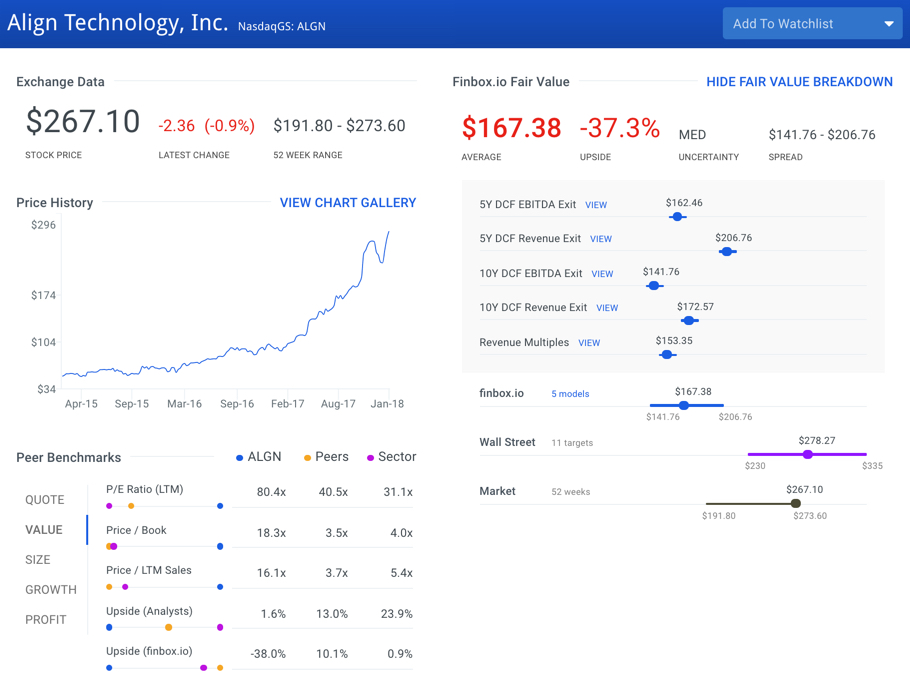 Align Technology's stock currently trades at $267.10 per share as of Monday January 22, up 190.2% over the last year. However, finbox.io's five valuation analyses suggest that shares are now roughly 35% overvalued.

The 10 Most Expensive Stocks In The S&P 500: Intuitive Surgical

Intuitive Surgical (NasdaqGS: ISRG) manufactures and markets da Vinci surgical systems, and related instruments and accessories. The company’s da Vinci surgical System translates a surgeon’s natural hand movements, which are performed on instrument controls at a console into corresponding micro-movements of instruments positioned inside the patient through small incisions or ports. The company also manufactures EndoWrist instruments that include scissors, scalpels, and other surgical tools. It markets its products directly and through distributors in the worldwide. Intuitive Surgical, Inc. was founded in 1995 and is headquartered in Sunnyvale, California. 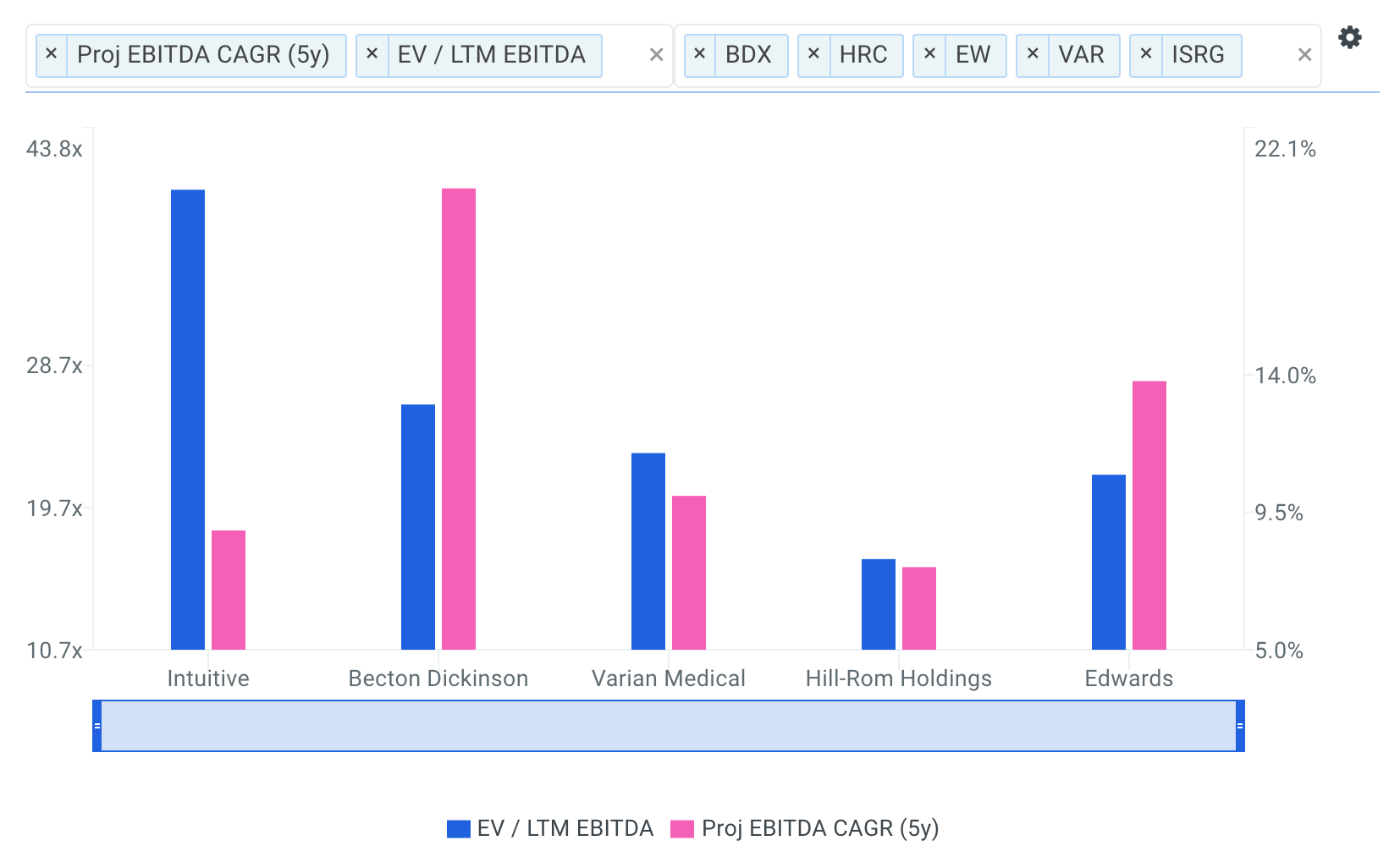 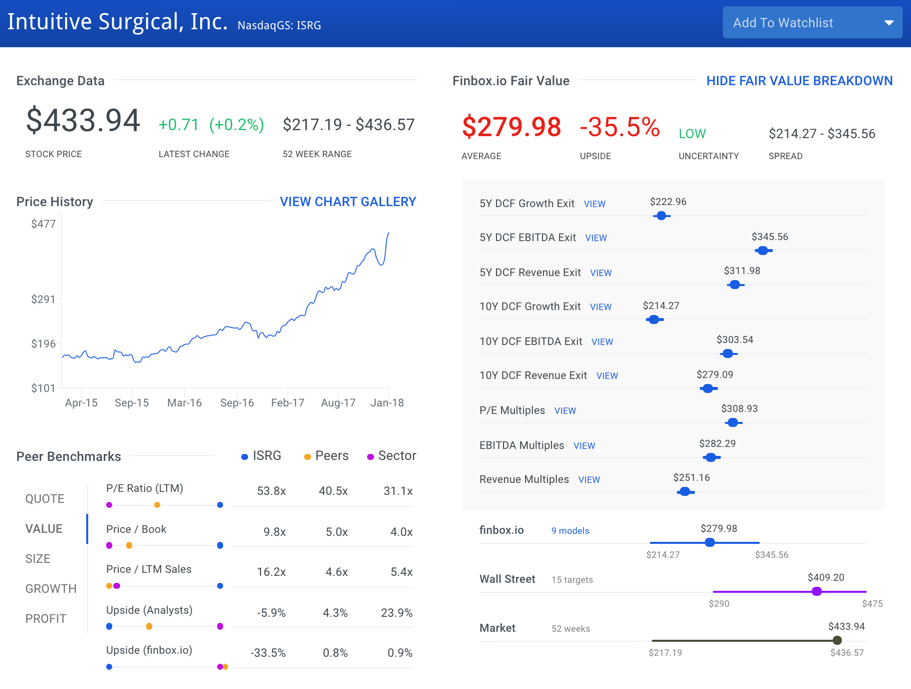 Shares of the company are trading 97.9% higher year over year. But the stock price could end up trading -35.5% lower in 2018 based on Intuitive Surgical's future cash flow projections.

The 10 Most Expensive Stocks In The S&P 500: Vulcan Materials

Vulcan Materials (NYSE: VMC) produces and sells construction aggregates, asphalt mix, and ready-mixed concrete primarily in the United States. Vulcan Materials was founded in 1909 and is headquartered in Birmingham, Alabama. 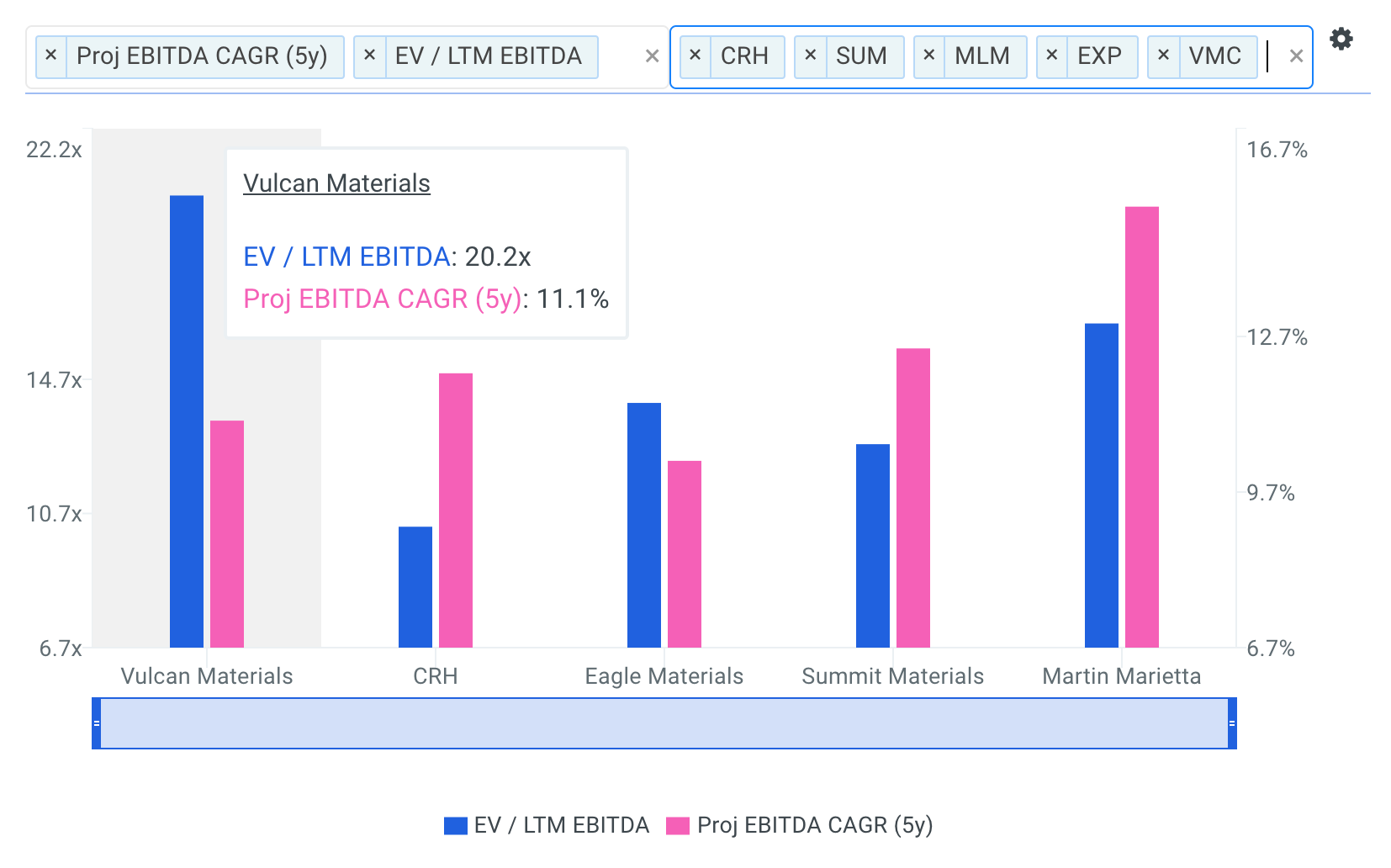 Wall Street analysts project that the company's EBITDA grows at 11.1% over the next five years. This growth rate is only above EXP (10.3%) and below MLM (15.2%), SUM (12.5%) and CRH (12.0%). However, Vulcan Materials' EBITDA multiple trades well above this same peer group implying the stock is quite expensive. 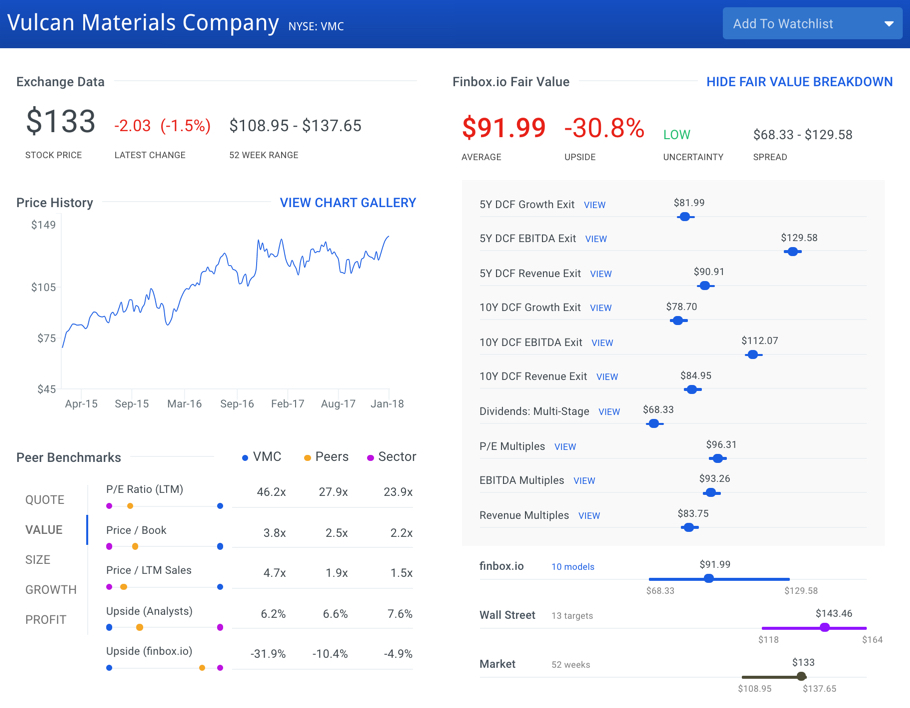 Vulcan Materials' stock currently trades at $133.00 per share as of Monday January 22, up 4.8% over the last year. On a fundamental basis, the company's stock is trading at a -30.8% premium to finbox.io's intrinsic value estimate.

The 10 Most Expensive Stocks In The S&P 500: Mettler-Toledo

Mettler-Toledo (NYSE: MTD) manufactures and supplies precision instruments and services worldwide. The company offers weighing instruments for laboratory, industrial, packaging, logistics, and food retailing applications. Mettler-Toledo markets its products through its direct sales force and indirect distribution channels. The company was founded in 1991 and is based in Columbus, Ohio. 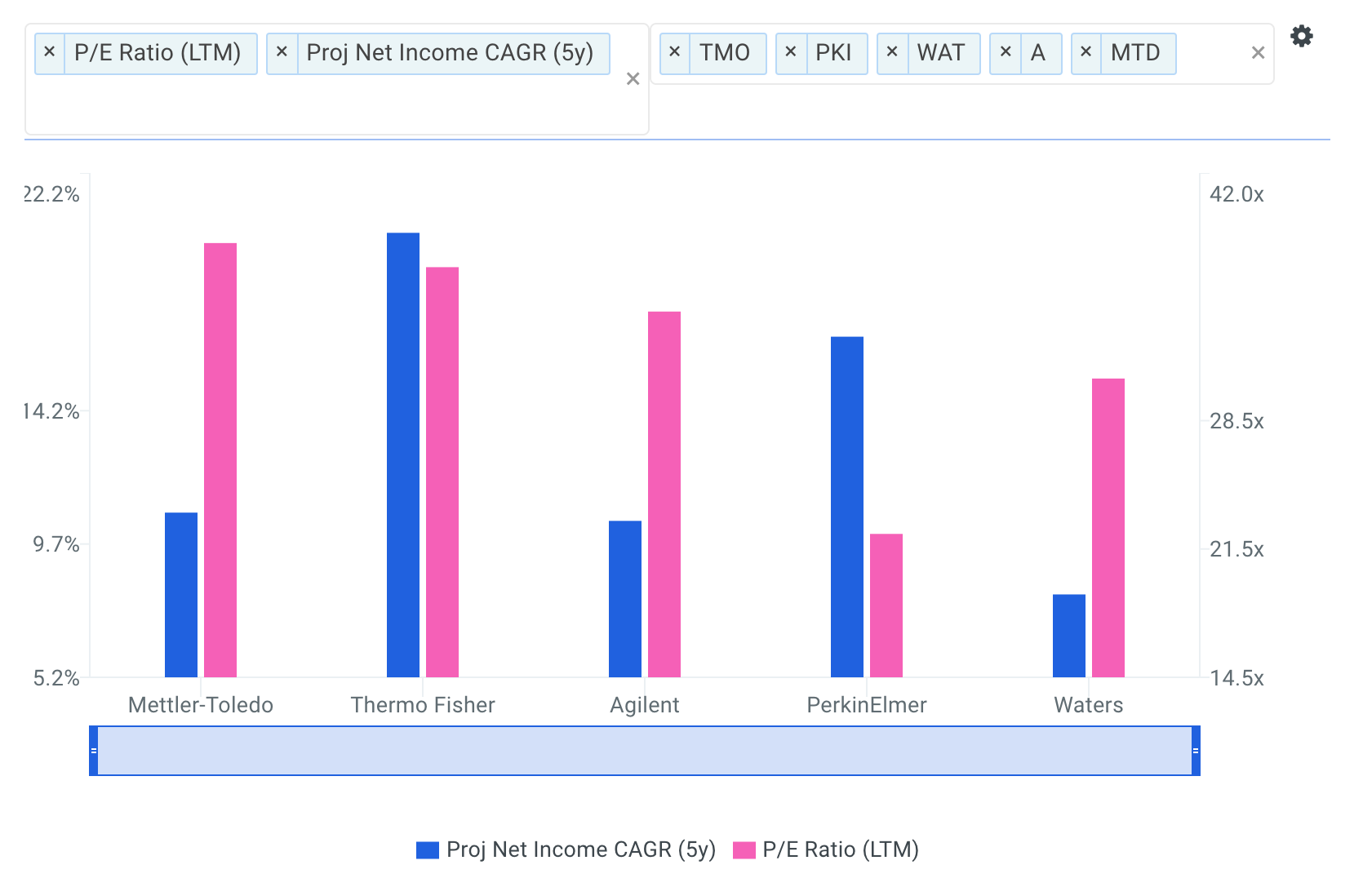 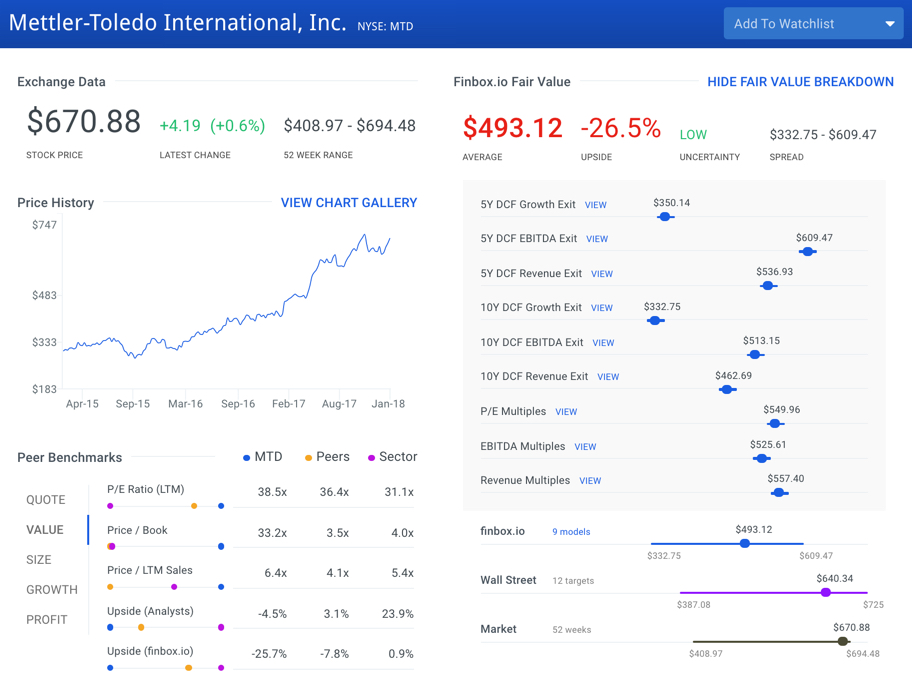 Shares of the company are up 60.6% over the last year. The stock last traded at $670.88 as of Monday January 22 and nine separate valuation analyses imply that there is -26.5% downside relative to its current trading price.

Mattel (NasdaqGS: MAT) designs, manufactures, and markets a range of toy products worldwide. It offers dolls and accessories, vehicles and play sets, and games and puzzles under the Mattel Girls & Boys brands, including Barbie, Polly Pocket, DC Super Hero Girl, Disney Classics, Hot Wheels, Matchbox, CARS, DC Comics, WWE Wrestling, Minecraft, and Toy Story. The company also provides its products under the Fisher-Price brands. In addition, it offers its products under the American Girl brands. Mattel sells its products directly to consumers via its catalog, website, and proprietary retail stores, as well as directly to retailers and distributors. The company was founded in 1945 and is headquartered in El Segundo, California. 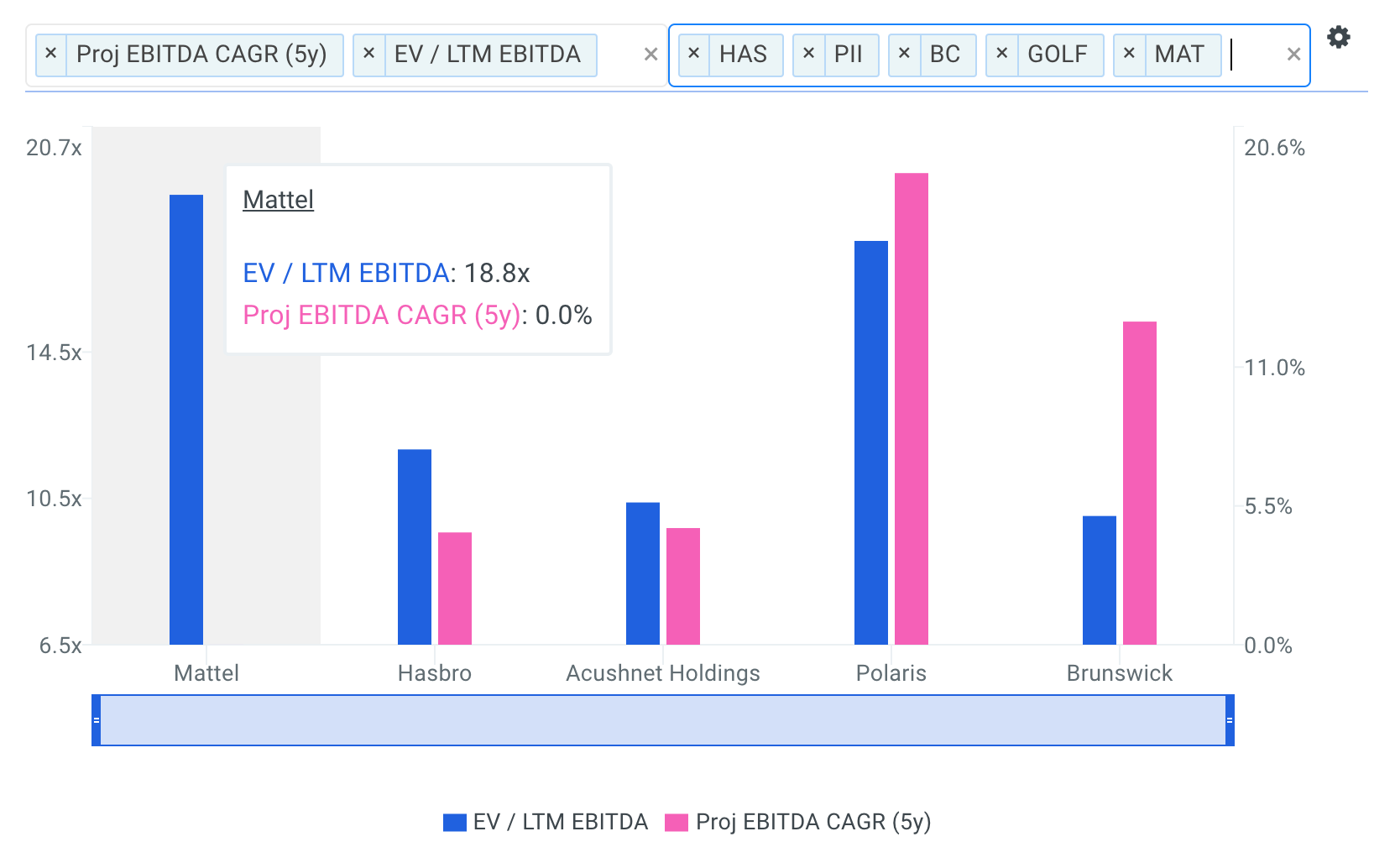 Analysts expect that the company's EBITDA will reach the same level in 2021 as it did in 2016. However, investors purchasing shares today would pay 18.8x EBITDA for a low growth company. This looks very expensive when compared to Mattel's peers. 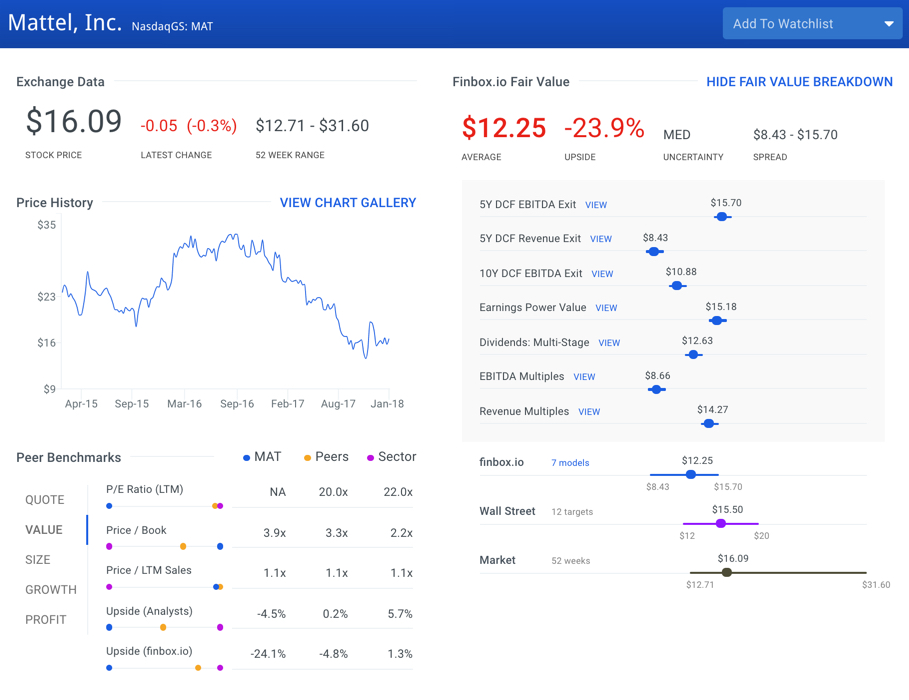 Shares of Mattel are down -44.0% over the last year and finbox.io's fair value estimate of $12.25 per share calculated from seven cash flow models imply -23.9% downside. The average price target from 12 Wall Street analysts of $15.50 per share similarly imply downside.

C.H. Robinson (NasdaqGS: CHRW) is a third party logistics company providing freight transportation services and logistics solutions to companies in various industries worldwide. It has contractual relationships with approximately 107,000 transportation companies. In addition, the company is involved in buying, selling, and marketing fresh produce, including fresh fruits, vegetables, and other perishable items. C.H. Robinson was founded in 1905 and is headquartered in Eden Prairie, Minnesota. 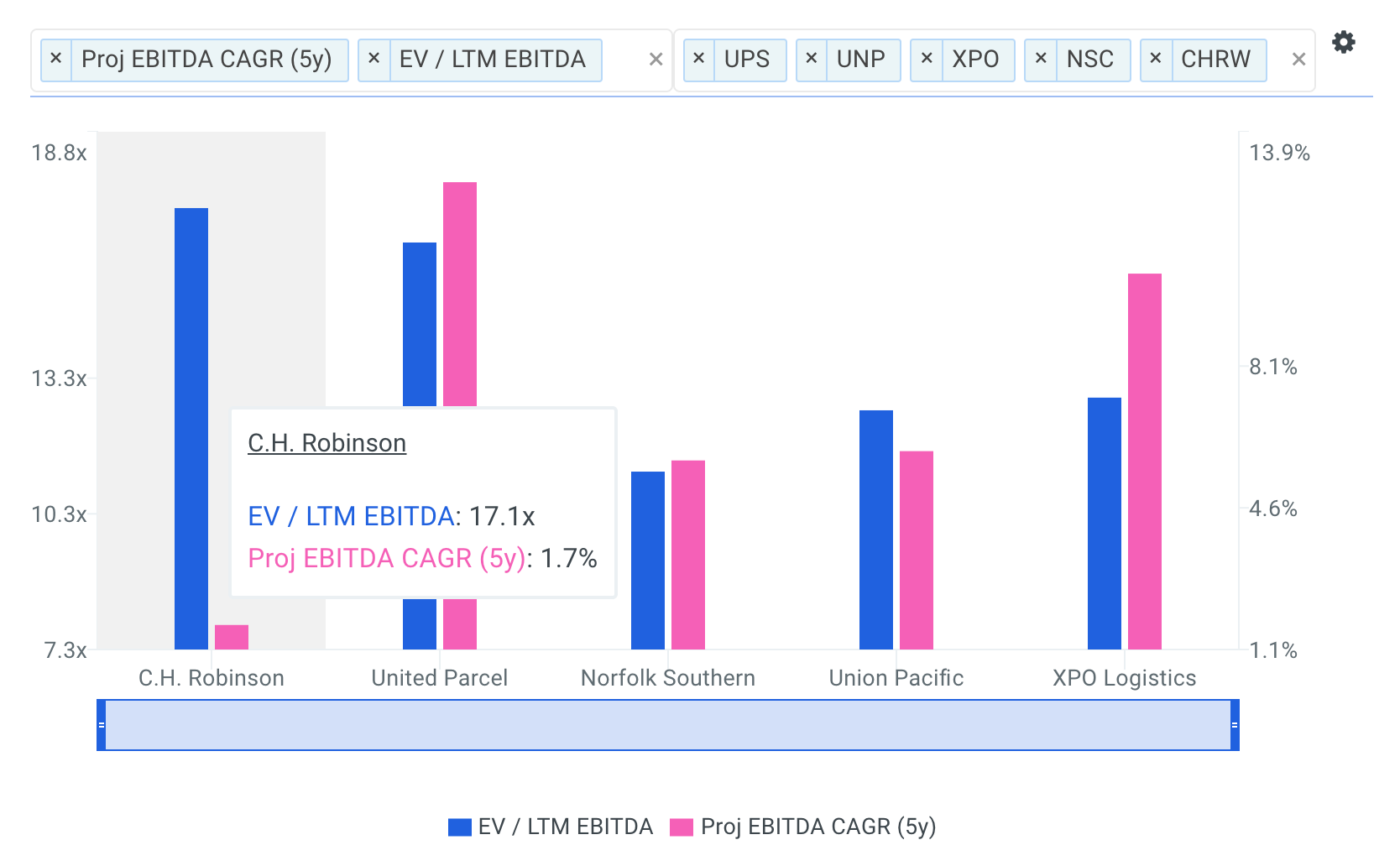 Typically, high growth companies trade at a higher multiple of EBITDA. But notice the company's projected 5-year EBITDA CAGR of 1.7% is well below all of its peers while its LTM EBITDA multiple of 17.1x is above this same peer group. 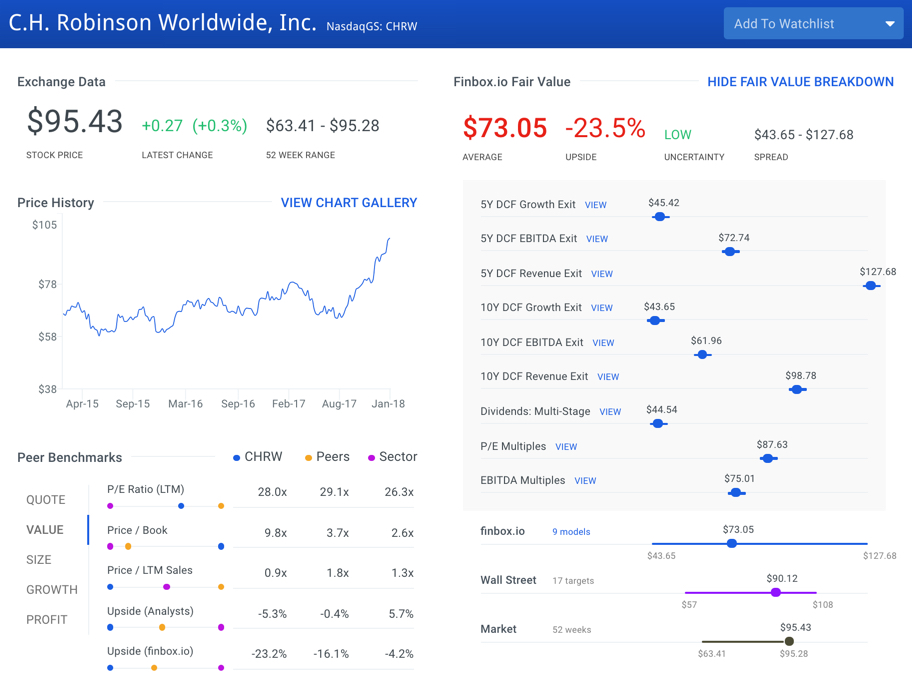 C.H. Robinson's stock currently trades at $95.43 per share as of Monday January 22, up 32.4% over the last year. Finbox.io's nine valuation analyses suggest that shares could decrease -23.5% going forward. 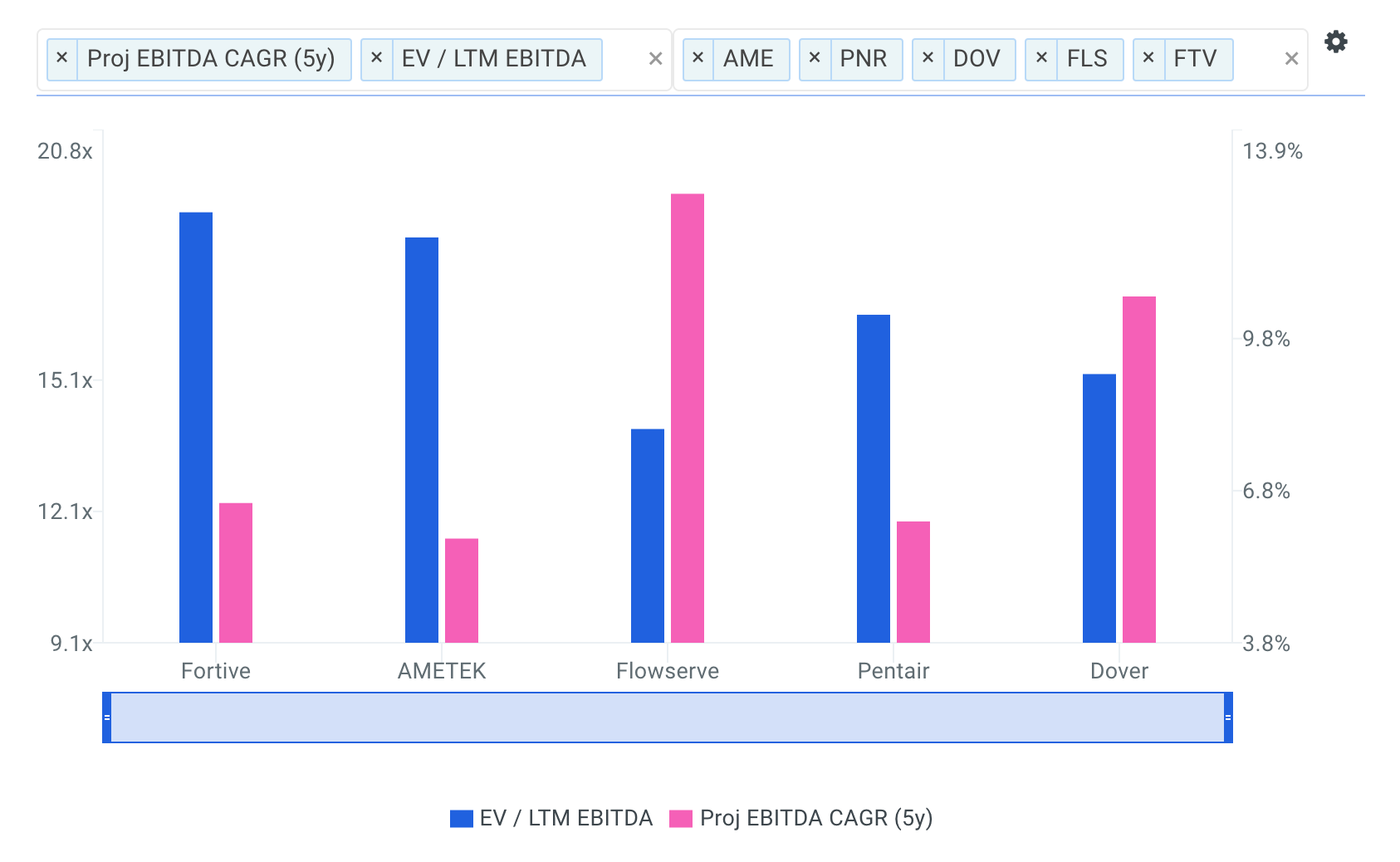 Furthermore, the company's EBITDA is only expected to grow at a quicker rate than Pentair over the next five years. 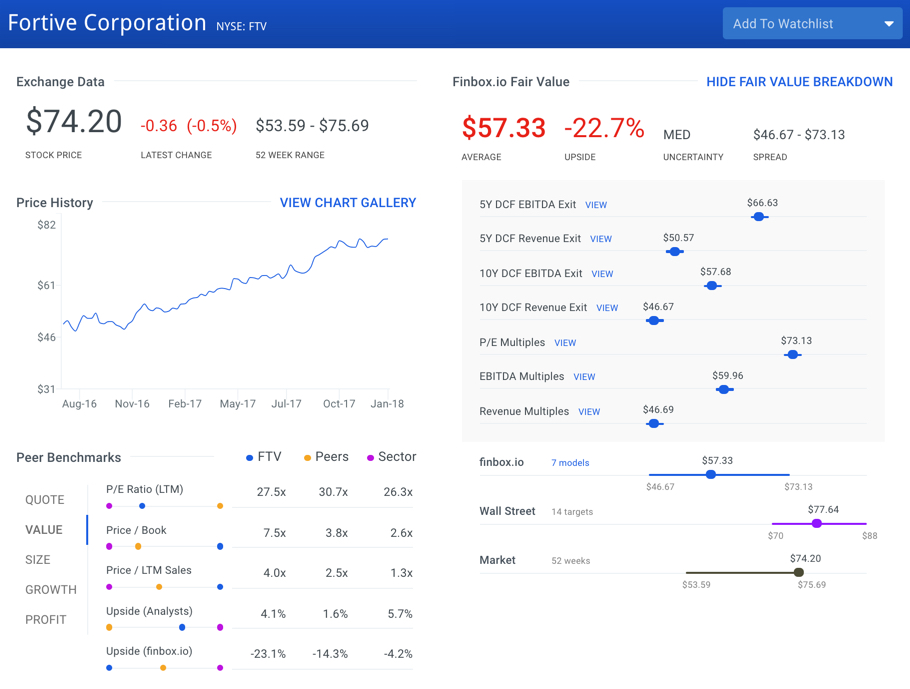 Shares of the company are trading 37.4% higher year over year. But the stock price could end up trading -22.7% lower in 2018 based on Fortive's future cash flow projections.

Coca-Cola (NYSE: KO) manufactures and distributes various nonalcoholic beverages worldwide. Coca-Cola sells its products primarily under the Coca-Cola, Diet Coke, Coca-Cola Zero, Fanta, Sprite, Minute Maid, Powerade, Schweppes, Dasani, Simply, and Glacéau Vitaminwater brand names. The company offers its beverage products through a network of company-owned or controlled bottling and distribution operators, as well as through independent bottling partners. The company was founded in 1886 and is headquartered in Atlanta, Georgia. 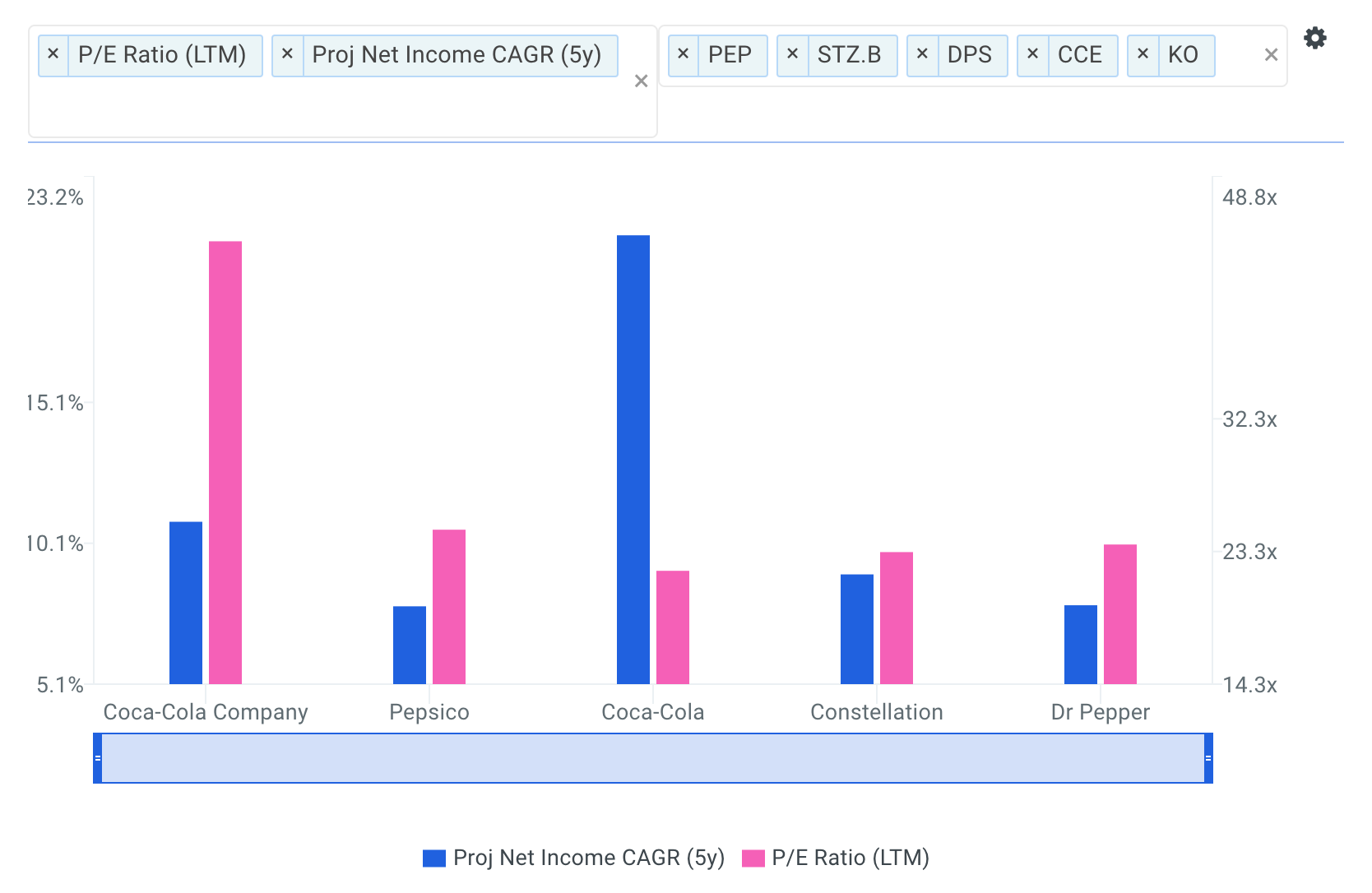 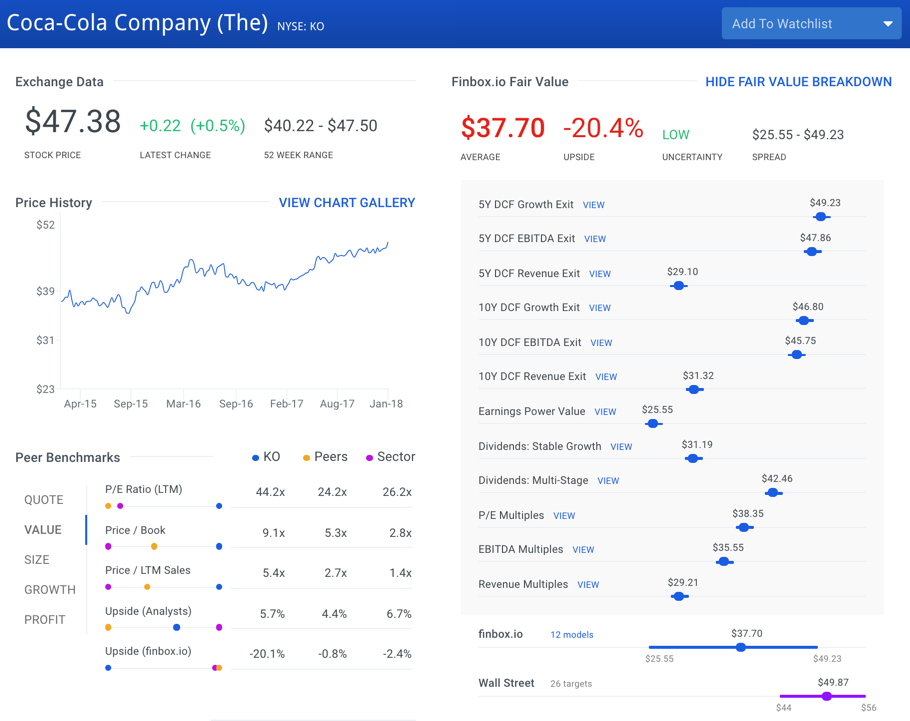 Coca-Cola's stock currently trades at $47.38 per share as of Monday January 22, up 18.0% over the last year. On a fundamental basis, the company's stock is trading at a -20.4% premium to finbox.io's intrinsic value estimate.