Tesla Inc (NASDAQ:TSLA) is currently one of the most heavily shorted stocks, with a total short interest of $10.4 billion. Most of the short sellers are looking for any clue that can justify their position given the fact that TSLA has seen 70% growth YTD. Short sellers are now down a staggering $5.1 billion year to date whereas in June alone they lost over $1 billion. However, there may be more pain in store for short sellers due to a number of reasons.

Difference in Tesla’s Bears and Bulls

When taking a closer look at the analysts covering Tesla we find that most who are advocating short positions in Tesla come from an automotive background. Comparatively, analysts favoring long positions come from a tech background.

The automotive background analysts highlight that expanding production levels carries a big risk and takes significant time. On the other hand, those coming from the tech space see Tesla as more than just an auto company. They point to autonomous driving, electric transportation, storage options and other future frontiers which Tesla can develop.

There is also a clear difference in the timeline which bulls and bears point to for Tesla. Most of the bearish arguments state their reasons for 2017 and 2018 whereas the bullish arguments are based on what Tesla can achieve by 2020 or even 2025.

What Can Pull Tesla Down?

There have been a number of recent developments which should have had a negative impact on the stock. This includes downgrade from major firms like Morgan Stanley, a management change in Ford (NYSE:F) hinting at a greater focus on future growth areas, Toyota’s (NYSE:TM) stake sale and the decision by the Trump administration to pull the U.S. out of the Paris climate change accord. However, none of these events have led to any significant slide in the stock price.

Even missing the production guidance might not be sufficient to dent the long term growth story in the stock. In 2016, the company delivered 76,230 vehicles, below its projections of 80,000 units for the year. (The company missed the target after already reducing its earlier projection of delivering in the range of 80,000 to 90,000.) Tesla has also missed its quarterly target in three out of the last four quarters. Still the market eagerly looks forward to the future. One where Musk predicts that Tesla will sell half a million cars in 2018.

The bullish arguments are not based on meeting earnings estimates in the short term but on Tesla's ability to stay ahead of competitors, launching new models and entering new segments. Short sellers have repeatedly argued about the inability of a fledgling car company to meet the targets set by its ambitious CEO. As far as production targets are concerned, the market appears more than happy if the company can simply come close to its ambitious goals.

GM’s (NYSE:GM) Chevy Bolt was supposed to give Tesla competition in the electric vehicle (EV) category. However, Chevy Bolt sales have been very slow selling only 6,529 units in the last six months. One reason why GM is not putting more effort in increasing its production could be the profit (or should we say lack of it). According to estimates by UBS analysts, GM is losing $7,500 on every Bolt. 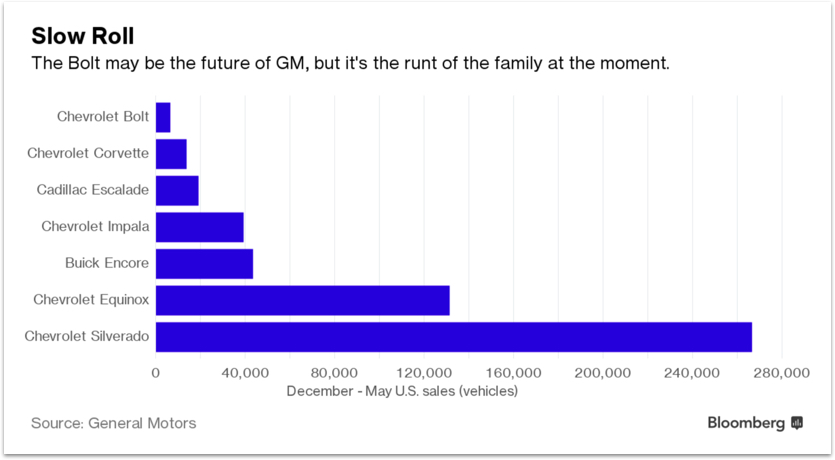 The Chevy Bolt will be available across the country in the next few months and will start to compete with Tesla's Model 3 by the end of the year. If it can expand its customer base by a significant number despite Model 3’s hype, it would be a big warning shot at Tesla.

Another major factor which can pull Tesla lower is the speed with which other automakers start rolling out their EV models and autonomous driving. Ford has already moved in this direction after an aggressive management shakeup. GM is also looking to curb investments in other emerging markets and focus on the newer growth trends in the industry. Furthermore, almost every automaker has increased their investments in launching EV models and autonomous driving technologies.

Tesla has a huge lead over these competitors but most of them come with deep pockets and have only recently started to invest heavily in these new trends. It will likely take at least until the end of 2018 before any legitimate competitor is able to put a dent Tesla’s lead. If Tesla can keep its innovation engine running at full throttle (something Elon Musk is highly capable of), investors should expect it to sustain its pioneer status in the new technologies shaping the auto industry.

And what comes along with its pioneer status is also a higher valuation.

According to finbox.io's 5-year DCF model for TSLA where the forecast takes the average analyst estimate for each projection year, there is still over 20% upside for this stock. This takes into consideration a strong revenue CAGR of nearly 40% over the projections period as the Model 3, Model Y and other projects are brought into the market. Analysts also expect EBITDA margins to reach over 20% by fiscal year 2021. 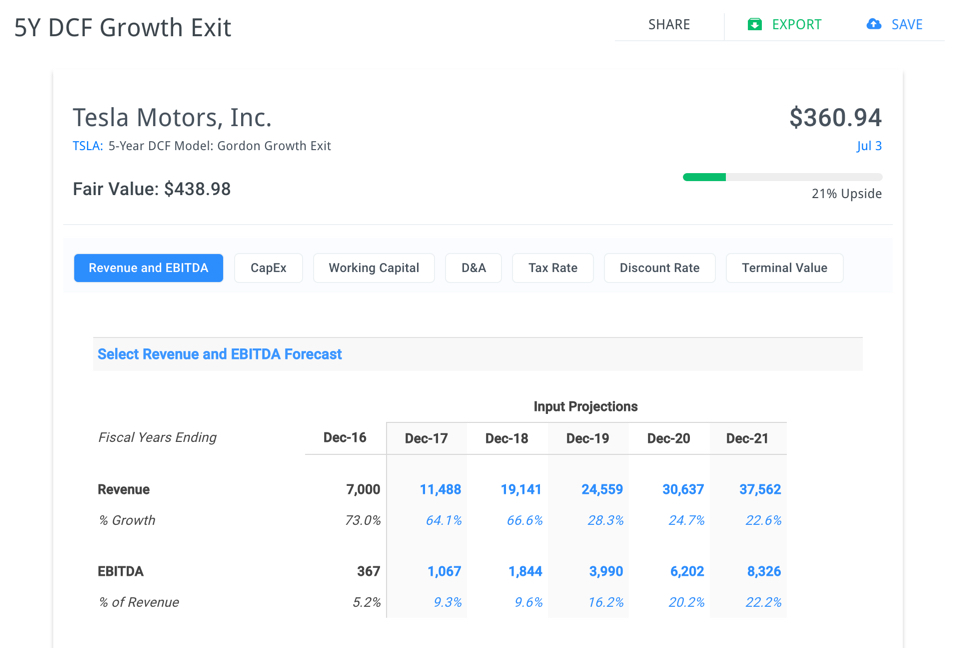 The largest revenue increase is expected this year and in 2018 as the Model 3 production reaches its peak. Elon Musk has recently stated that Model 3 production will be ramped up to 5,000 vehicles per week at some point in 2017 and to 10,000 vehicles in 2018. Even if Tesla comes close to that target, it would be a nice increase in its unit sales which were less than 80,000 in 2016. This will certainly help lift revenues and the stock going forward.

Tesla has seen a major bull run in the past few months which has increased bearish arguments for the stock. However, the stock has easily weathered most of the negative news in the last few weeks and is looking stronger as the company prepares to launch its much anticipated Model 3.

Furthermore, even if the company misses its target in the near term it would not necessarily cause a big drop in the stock price. The majority of the bullish arguments for Tesla shares are based on the ability of the company to deliver substantial growth over the longer term. Investors shouldn't be surprised if this stock rises to over $360 per share before the end of the year.

Note this is not a buy or sell recommendation on any company mentioned.
Photo Credit: Salem State Log