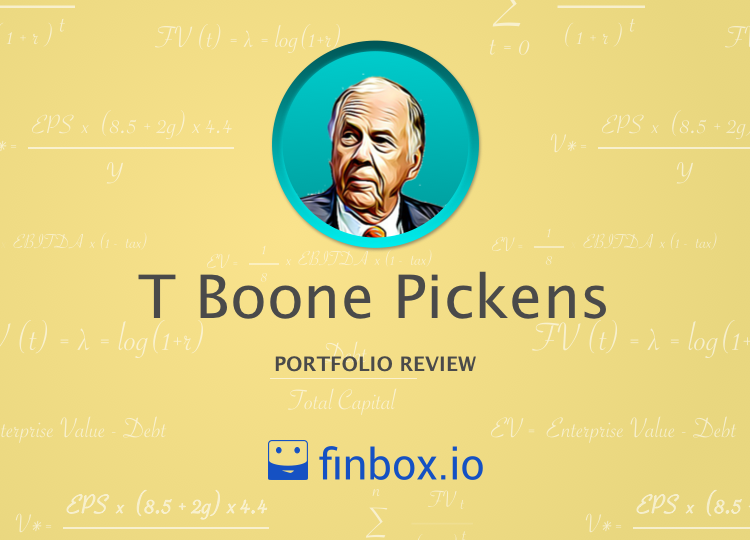 How T. Boone Pickens became a corporate raider and a review of his current stock portfolio.

The Swashbuckling Corporate Raider from Oklahoma

T. Boone Pickens is a legend in the American energy industry. He has been labeled a ‘wildcatter’, a financier, a takeover operator, a real-life JR Ewing, and a corporate raider. His diversified career has spanned over 60 years and at the age of 89 he is still active.

Pickens started Petroleum Exploration, Inc with $2,500 in 1952. He also started Altair Oil and Gas to focus on exploration in Canada. In 1956 he merged the two companies into Mesa Petroleum, which he eventually grew into the biggest independent oil and gas company in America.

In 1969 he launched his first hostile takeover in a bid to acquire Hugoton Production company along with its enormous gas field. He did this by making an offer to Hugoton shareholders using newly issued stock in Mesa. This type of offer became popular in the the 1980s, but was virtually unheard of at the time.

He went on to make a name for himself by engaging in more hostile takeovers throughout the 1970s and 1980s. Pickens portrayed himself as fighting for the rights of small shareholders who were getting a bad deal from corporate executives. Not everyone saw things this way, and he was often portrayed as a corporate villain in the media.

Eventually, corporate executives learned to set up corporate structures that were immune to corporate raiders like Pickens. He also made a series of bad investments, and in 1996 was forced to sell Mesa which was on the verge of bankruptcy.

In 1997, at the age of 70, Pickens started BP Capital Management which invests in energy companies. More recently he has found fame once again investing heavily in wind energy and for promoting the ‘Pickens Plan’, a comprehensive energy policy for the US. The plan called for reducing America’s dependence on foreign oil by moving the trucking industry to natural gas and investing in solar and wind energy.

T Boone Pickens has always been active at the forefront of innovation. In his early years, this involved devising innovative strategies to acquire much larger companies. In the last two decades, he has been more involved as an early investor in the natural gas and renewable energy industries.

He made a hostile tender offer to Hugoton shareholders, offering 1.8 shares of Mesa stock for every share of Hugoton. While Hugoton’s management didn’t take him seriously, he acquired enough Hugoton stock for the merger to be approved. Pickens then had control of a much larger company which enabled him to do even bigger deals.

In 1982 Pickens tried to take over Cities, but instead triggered a bidding war among several other would-be acquirers. In the end, Occidental Petroleum won and acquired Cities. However, Mesa still managed to make a $31 million profit selling the Cities stock they had bought and helped to bid higher.

This became known as ‘greenmailing’. A company would buy stock in a company before announcing a takeover offer. The offer would trigger a bidding war and drive the price higher. The buyer would then sell the inflated stock back to the target company or to a rival bidder. Regulators have since stopped this practice by taxing the proceeds of greenmailing.

In 2007 Pickens became one of the first prominent energy investors to back wind power and he announced plans to build the world’s largest wind farm in Texas. In 2010 the plan was scrapped due to the unavailability of transmission lines to connect the farm to the national grid. Ultimately, he lost money on the project as he had already invested in over 600 wind turbines. His call was right, but the timing was wrong.

Though he may have been able to resurrect the project later he decided to focus on natural gas. He felt natural gas was far cheaper and the only alternative to oil for large vehicles. As Tesla is now building electric trucks he may have been wrong on this call too.

T Boone Pickens career has had numerous successes and failures. His overall success probably has more to do with his daring nature and tenacity than anything else.

BP Capital's stock portfolio totals nearly $231.6 million according to the latest filing. The list value of stock holdings is up 11.0% when compared to the last quarter. As a benchmark, the S&P 500 was up 3.9% over the same period.

Quarter-over-Quarter Turnover (QoQ Turnover) measures the level of trading activity in a portfolio. BP Capital's QoQ Turnover for the latest quarter was 19.2%, so the firm appears to trade a significant percent of its portfolio each quarter.

The Ideas section of finbox.io tracks top investors and trending investment themes. You can get the latest data on the holdings discussed below here. The following table summarizes BP Capital's Largest Holdings reported in the last filing:

The seven positions above represent only about 26.0% of the hedge fund's total portfolio. This is fairly low in comparison to other hedge funds like David Einhorn's Greenlight which has 1 single position making up 25% of the portfolio.

The next ranking table lists the stocks in BP Capital’s portfolio with the best dividend yields. Dividend seekers can appreciate stocks that earn upwards of 6% excluding price appreciation and are also backed by a prominent investor.

The table below ranks stocks in BP Capital's portfolio with most bullish analyst targets: