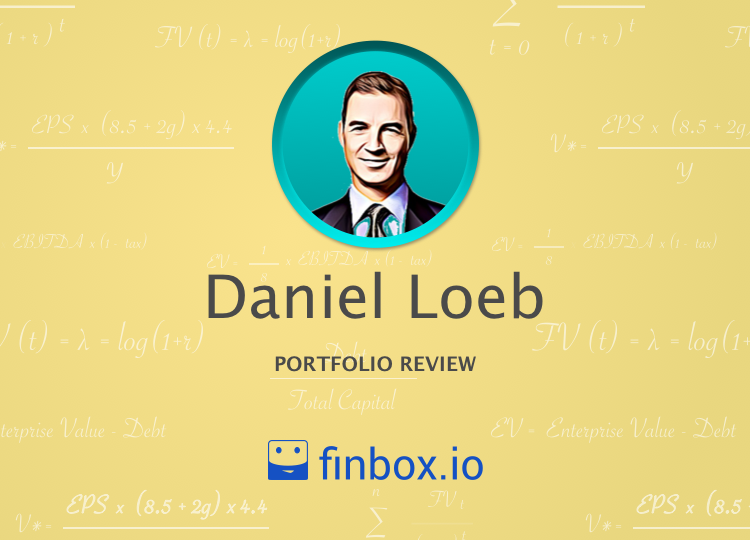 Daniel Loeb has made a name for himself generating impressive, and consistent, returns over the last two decades. In the process he has amassed a fortune of $3.2 billion, putting him at number 240 on the Forbes 400 list.

Loeb founded Third Point in 1995 that now runs two hedge funds. He started the company with $3.3 million from family and friends, in office space borrowed from David Tepper’s Appaloosa Capital. The Third Point Offshore Limited fund has generated annual returns of 15.8% since inception (1996) while the Ultra Limited fund has generated returns of 23.7% since its inception in 1997. This compares favorably to the S&P500 which has averaged less than 8% per year since 1997.

His investment style involves shareholder activism meaning he invites controversy. Loeb, therefore, finds himself in the media often and is not afraid to get into public arguments with those he disagrees with. Warren Buffett, George Clooney, the CEOs of Sony and Yahoo, and fellow activist investor Bill Ackman have all found themselves on the receiving end of his verbal attacks.

Third Point’s website defines its investment approach as flexible and opportunistic, as well as event-driven and value-oriented. It goes on to say that

“the Firm seeks to identify situations where we anticipate a catalyst will unlock value.”

Very often the catalyst is Loeb’s shareholder activism. He looks for companies that are in trouble, and that he believes are badly managed. He likes to buy enough stock to gain influence, and then convince other shareholders to push for changes in management and strategy.

Over the last few years, Loeb has become increasingly active in Japan. He believes that Japanese corporate structures are ripe for restructuring, and that value can be unlocked by spinning off profitable subsidiaries.

The following are some of Loeb’s most prominent investments of the last decade.

Loeb and Third Point Partners were major players in the drama that unfolded at Yahoo in 2011. He and other shareholders were instrumental in replacing CEO Scott Thompson with Marissa Meyer, and in introducing a new corporate strategy. In the process, Loeb negotiated for Yahoo to buy back part of Third Point’s stake.

Loeb has been a major shareholder of the auction house Sotheby’s since 2011. Sotheby’s has lost its place in the art world (to Christie’s) and has experienced dwindling margins for some time. Loeb spent years trying to oust the CEO, William Ruprecht, who eventually retired in 2015.

Third Point’s latest target for corporate change is Nestle. Third Point invested in the company earlier this year and Loeb made his thoughts known in June. Loeb wants Nestle to sell its shares in L’Oréal, increase its debt to buy back shares, and increase its margins. As of September 2017, Nestle had given in to most of Loeb’s demands.

Third Point's stock portfolio totals nearly $11.9 billion according to the latest filing. The list value of stock holdings is up 5.4% when compared to the last quarter. As a benchmark, the S&P 500 was up 3.9% over the same period.

Quarter-over-Quarter Turnover (QoQ Turnover) measures the level of trading activity in a portfolio. Third Point's QoQ Turnover for the latest quarter was 21.8%, so the firm appears to trade a significant percent of its portfolio each quarter.

The Ideas section of finbox.io tracks top investors and trending investment themes. You can get the latest data on the holdings discussed below here. The following table summarizes Third Point's Largest Holdings reported in the last filing:

The seven positions above represent nearly 60% of the hedge fund's total portfolio.

It was also interesting to see what sectors Loeb is most exposed. Stocks in the Healthcare sector make up 29.0% of Third Point's portfolio while Information Technology, Materials, and Financials make up 23.3%, 14.6%, and 12.0%, respectively. No other sector makes up more than 7.5%.

Here are the Top 7 stocks based on my calculations:

It was interesting to see that two of Loeb's most undervalued stocks were also new positions: Shire plc and DowDuPont Inc. Value investors may want to take a closer look at both of those names.

While Loeb is well known for activist investing, his funds also invest in companies where he believes he doesn't need to change the direction of the company. As his latest portfolio holdings show, Loeb is happy to invest in any company he believes can generate superior returns, including growth companies and undervalued companies.

Analyzing thousands of stocks listed on U.S. exchanges is likely impossible for smaller investors. That's why it is wise to leverage the resources from distinguished money managers, such as Loeb, in order to help narrow down a watch-list.

Investors should take a closer look at the stocks mentioned above.