The 7 Best Semiconductor Stocks To Own Before Earnings

Here are seven stocks with exposure to the semiconductor industry, trading at a low P/E multiple, and have yet to report their Q3'17 earnings.

This earnings season has been a story of semi-surprises thus far with 275 members of the S&P 500 having reported as of Friday, October 27th. According to Factset, 76% (209 of 275) of companies that have reported Q3'17 results have beat their EPS estimates. This is above the trailing 4-quarter average EPS beat percentage of 71% and well above the 5-year average of 59%. In addition, these companies have beat their expected earnings on average of 4.7% which is also above the 5-year average of 4.2%.

The reason this earnings season has been semi-surprising is due to the minuscule impact these positive surprises have had on share prices. Companies that have reported upside earnings surprises have seen an average price impact of only +0.1% immediately following the announcement. Investors typically expect a stock to jump much higher when the company beats their estimates. We're not seeing this impact because the market has already priced in these positive earnings as illustrated by the S&P 500's premium valuation. The forward P/E ratio for the S&P 500 currently stands at 17.9x. This is well above its 5-year average of 15.6x and its 10-year average of 14.1x.

However, there has been a silver lining among these earnings announcements.

The Information Technology (IT) sector has been a clear leader this earnings season with 91% of companies reporting earnings above estimates. Furthermore, these companies are beating their expected earnings on average of 11.3%. This sector is on pace to achieve 14.8% year-over-year (YoY) growth.

More specifically, companies in the Semiconductor & Semiconductor Equipment industry have significantly outperformed reporting 42% YoY earnings growth thus far (factset). Other IT industries such as Software, IT Services, and Internet Software & Services have also reported healthy earnings growth of 12%, 11%, and 10%, respectively.

The semiconductor industry is highly cyclical and is constantly facing booms and busts as demand for its products quickly changes. However, it is worth taking a closer look at stocks in this industry when times are good as they currently are; iShares PHLX Semiconductor ETF (SOXX:NASDAQ) is up 40% since the beginning of the year and nearly 10% in the last month.

Therefore I was curious to see if there were still any companies that have (1) exposure to the semiconductor industry, (2) have yet to report earnings, and (3) are still trading at a fairly reasonable valuation implying that there's still upside potential.

According to finbox.io, the forward P/E multiple for the entire IT sector currently stands at 21.4x, well above the 17.9x of the S&P 500. This is not surprising as premium growth warrants a premium valuation. Therefore I use the 21.4x multiple as a ceiling in my screen.

The following are all the filters applied in this semiconductor stock screen.

There were only 7 stocks that resulted from this stock screen as of October 31st. I then ranked them below by their P/E multiple in ascending order. 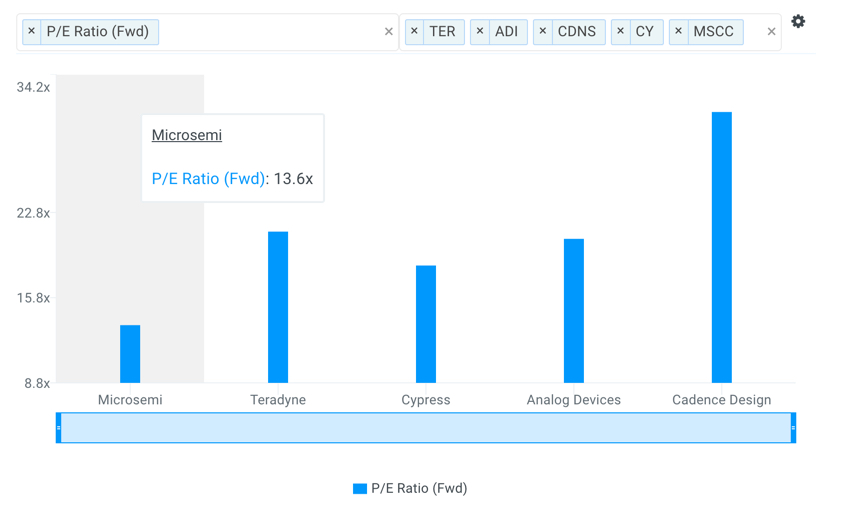 The company is expected to report earnings on Thursday, November 9th after the market closes. Although the stock is up 105% over the last three years, shares down -3% year-to-date as Microsemi has reported earnings in-line with expectations over the last three quarters. Don't be surprised if that trend changes next week. 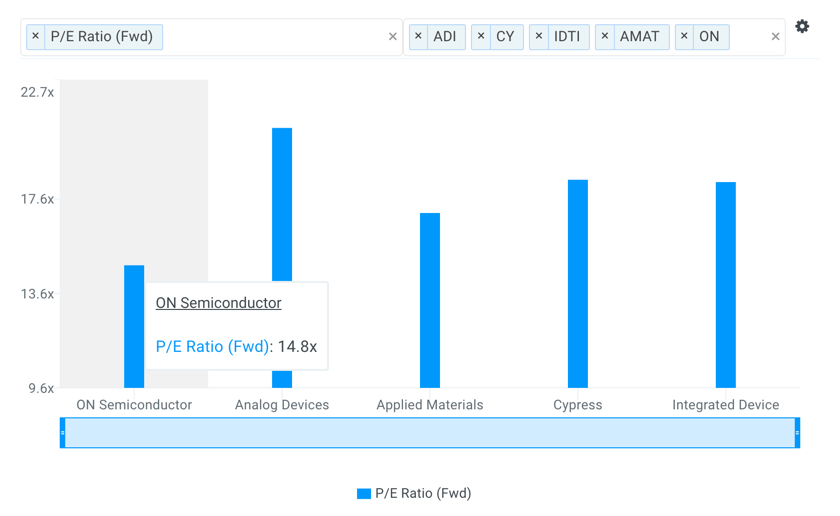 The company's shares last traded at $21.32 as of Tuesday, October 31st, approximately 99.8% of its 52-week high. The stock is up 64% year-to-date and 13% over the last month. Analysts are expecting management to announce $172 million of Net Income on Monday, November 6th. 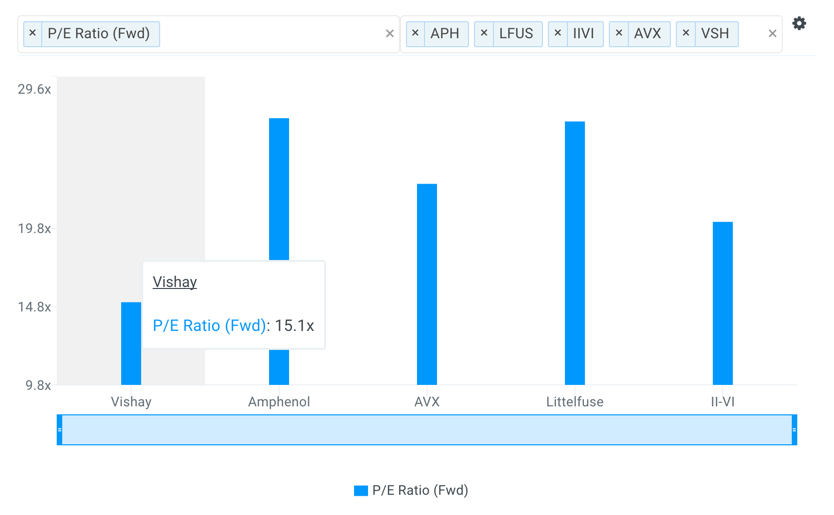 Vishay is expected to report earnings on Monday, November 6th and the company has beat earnings expectations nine of the last eleven quarters. Shares are up 36% year-to-date and 16% within the last month. 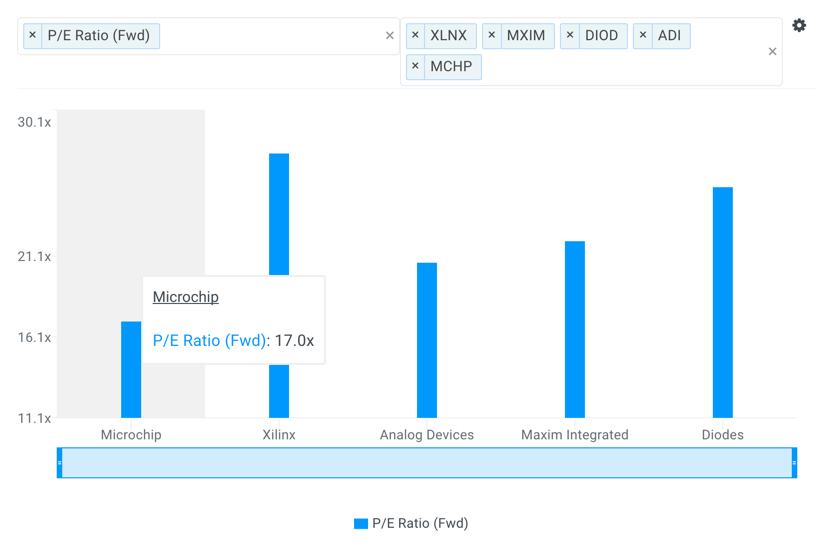 Although the stock is up 48% year-to-date, it still trades at a reasonable level. Microchip is expected to report earnings on Monday, November 6th after the markets close. Management has reported an earnings beat for ten of the last eleven quarters. 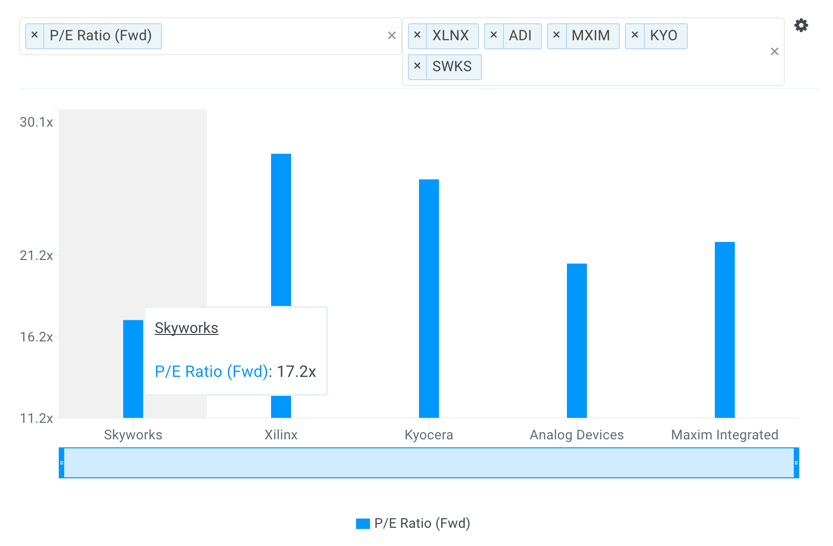 Skyworks is expected to report earnings on Monday, November 6th after markets close and analysts are expecting the company's bottom line to grow by 17.4% (CapitalIQ).

This is another stock that trades at a reasonable multiple considering shares are up 50% year-to-date and 11% over the last month. 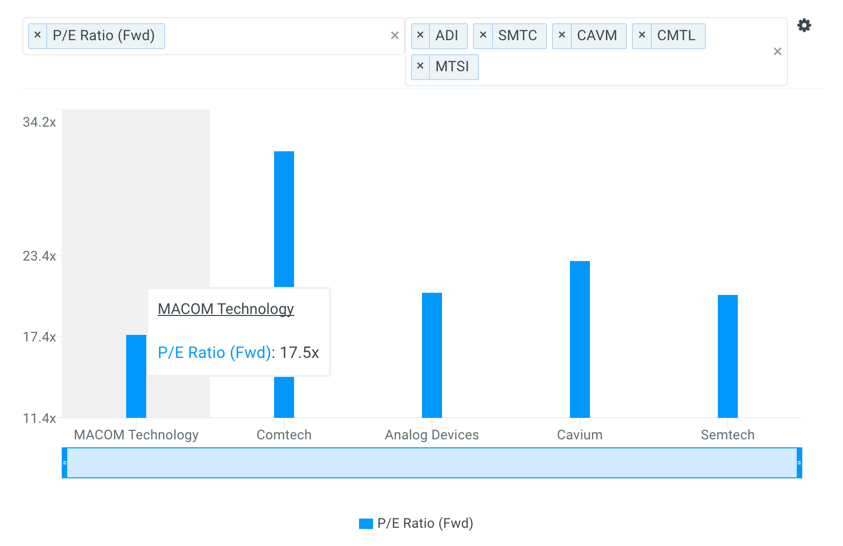 Unlike the other semiconductor names on this list, MACOM's stock is actually down -13% year-to-date and -10% over the last month. The majority of these losses are a result of the company's disappointing Q2'17 earnings announcement. Shares fell 25% after management reported net profit that grew 57% but missed analyst estimates by 3.6% according to CapitalIQ.

However, expectations are much lower for Q3'17 with Wall Street projecting earnings growth at only 2.1%. Management is expected to be announced on Tuesday, November 14th. 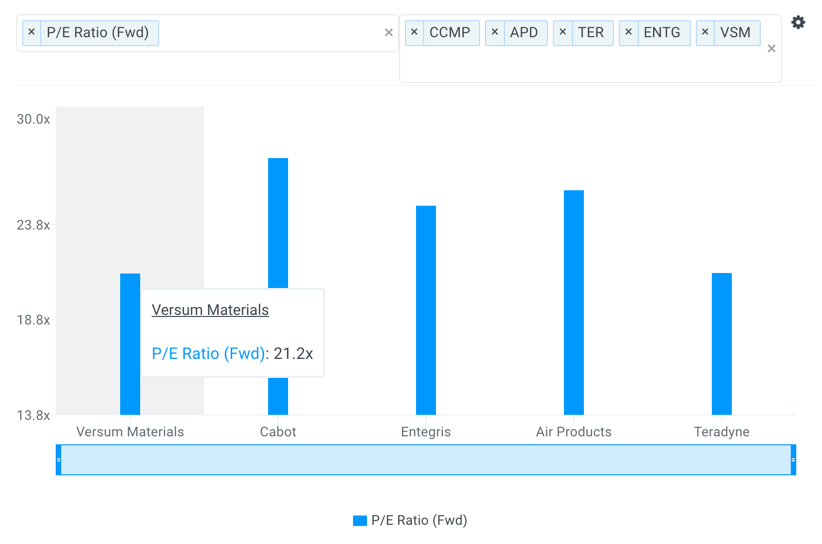 The company is expected to report its Q3'17 earnings on Thursday, November 9th. Versum has beat its earnings estimate every quarter since its spin-off (four quarters of data). Analysts are expecting management to announce $51 million of Net Income implying growth of 8.1% according to CapitalIQ.

It may be worth taking a closer look at these seven semiconductor stocks prior to them reporting earnings.

As of this writing, I did not hold a position in any of the aforementioned securities and this is not a buy or sell recommendation on any security mentioned.
Photo Credit: Benzinga