Growth at a Reasonable Price in this Market?

Growth at a Reasonable Price, or GARP, is an investing strategy that attempts to find the ideal middle-ground between growth and value stocks. These stocks are thought to be not too risky on the growth side, and not deep value, beaten down stocks that might not recover. The definitive ratio for this strategy is the PEG, or the P/E ratio divided by trailing 12-month EPS growth. The Healthcare sector currently sports the highest, or worst, PEG ratio, while the more capital-intensive industries (Energy, Materials, and Industrials) show the best ratios. A PEG ratio under one is considered GARP-worthy. 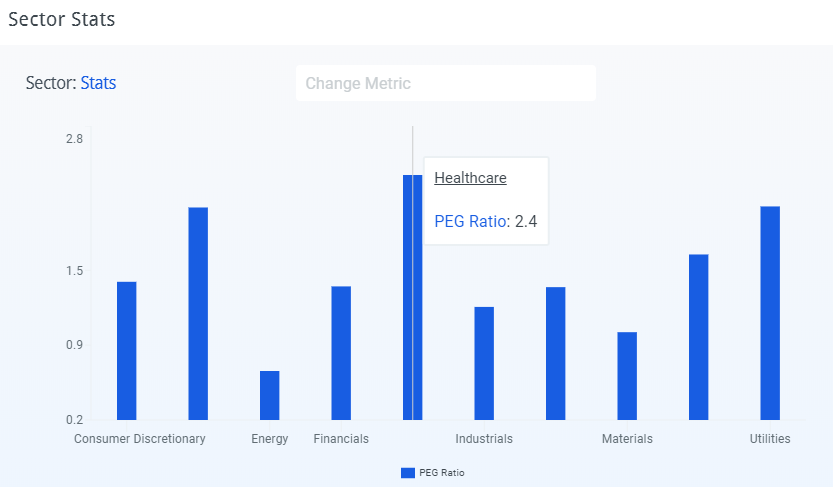 Eleven interesting candidates were found utilizing a modified GARP screen with finbox.io's screener, which focused on the Forward PEG (between 0 and 1), required positive free cash flow, a Short Interest ratio under 3 (the NYSE's Short Interest ratio is 3.6), and both analyst and quant model upside of 15% plus.

A quick look at the Analysis of the screen indicates its efficacy. This group of 11 stocks would have outperformed the S&P 500 by 400 basis points over the last year, although the gap has been closing since the market began getting nervous earlier this year. 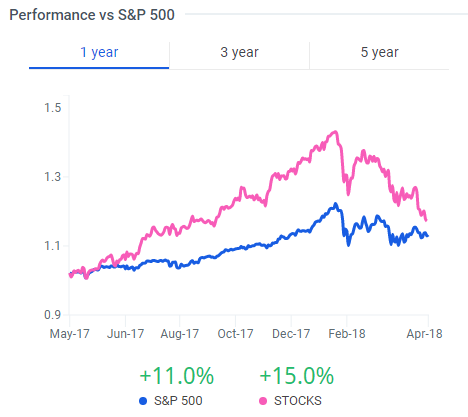 The makeup of the GARP candidates is a little surprising, with consumer sectors ranking in the top three, but as expected, Healthcare is at the bottom. One note, the PEG ratio is obviously earnings-based, which is not always a great indication of company health. Screening for positive cash flow helps filter out companies that may not be as operationally healthy as earnings purport. 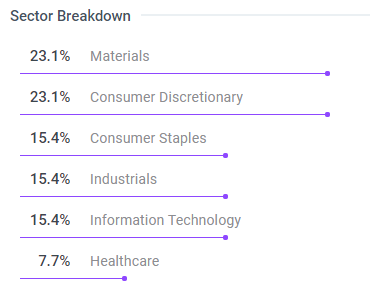 YY Inc. is a Chinese live streaming platform that has gained nearly 100% over the last year. It's largest holders are emerging market funds, and it skews more towards aggressive growth. The stock has solid metrics and warrants further research, but it does not fit the GARP profile. Regeneron is part of the Biotech industry, which in the past would also be considered more growthy, but the biotech large caps have matured.

Seeing Its Way to Stable Growth

Regeneron is celebrating its 30th anniversary. It prides itself as an R&D firm, generally licensing its offshore sales to the bigger pharma companies like Sanofi and Bayer. The firm has enjoyed expanding sales since 2011 and has grown net profit for four consecutive years. 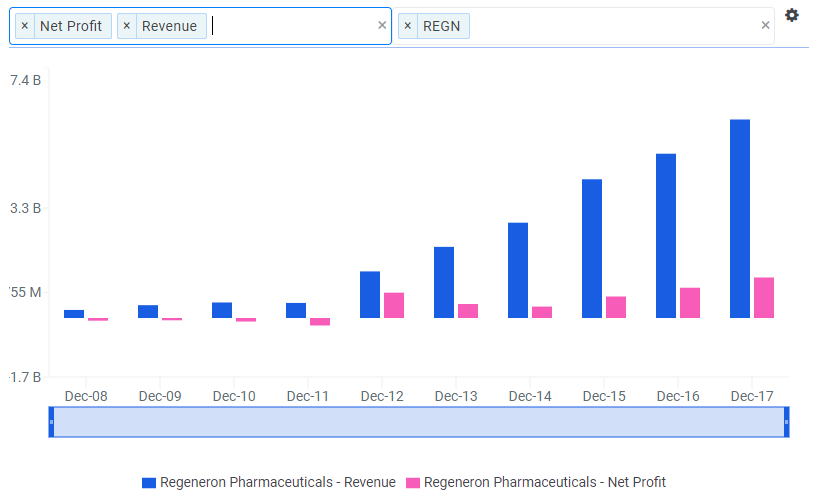 The biotech's growth has been on the strength of Eylea, a drug to help with macular degeneration in the elderly. Regeneron continues to expand the allowed usages of the drug, such as to diabetes-related damage. The knock on the drug company has been its portfolio. As is obvious below, Eyelea makes up an outsized portion of sales for the firm. 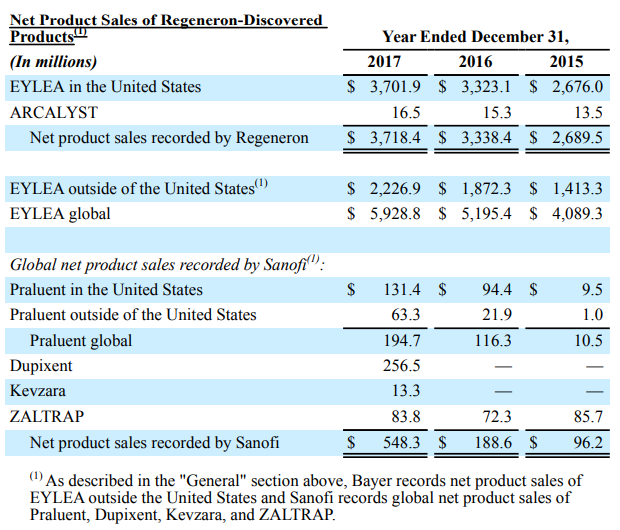 The growth story has been positive for Eylea with 11.4% growth in the U.S. in 2017, and 18.9% internationally. However, Regeneron does not get to cash in fully on global sales. Those $2.2 billion of international sales turn into around $874 million via the Bayer collaboration agreement. The good news is that the company will enjoy at least five more years protection with the first related patent expiring in 2023.

The drug maker did launch two new drugs last year, Dupixent for chronic rashes (atopic dermatitis) and Kevzara for rheumatoid arthritis. Dupixent had a positive launch, earning more than $250 million since its approval in March 2017. It was approved by the EU in September and by Japan in January 2018. Regeneron will be co-promoting it in the U.S. along with Sanofi and is allowing Sanofi to sell it offshore for the time being.

More good news for the existing portfolio comes thanks to the behind-the-scenes machinations of drug prescriptions. Pharmacy Benefit Managers ("PBM's") are the gatekeepers for drug dispensing for health insurers. These are essentially group purchasing organizations, who pool the insured from multiple health insurers to negotiate better fees with both drug makers and pharmacies. Express Scripts Holding Co (Nasdaq: ESRX) is the largest, managing 25 million patients. Until a recent deal to exclusively offer Regeneron's Praluent, an expensive cholesterol drug, the PBM was rejecting 70% of prescriptions for it and a similar drug offered by Amgen. The company expects sales to quickly jump as a result. On a side note, both Express Scripts and its next largest competitor CVS Health Corp (NYSE: CVS) are pending approval to merge with health insurers CIGNA Corporation (NYSE: CI) and Aetna Inc (NYSE: AET), respectively.

A drug company's pipeline is often the biggest known unknown. Regeneron has 16 drugs in clinical stage covering cancer, diabetic eye diseases, pain, muscle atrophy, and allergies. It is expecting approval of Dupilumab (asthma) and Cemiplimab (skin/lung/spine cancer) in 2018. Argus analyst Jasper Hellweg expects Cemiplimab to be one of a couple of blockbuster drugs that will launch from the pipeline over the next few years. 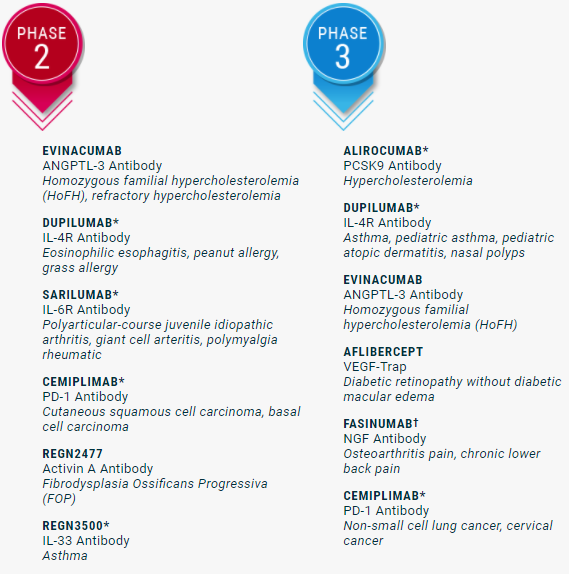 A Healthy Balance Sheet Keeps the Doctor Away

Regeneron has the second best Net Profit Margin of its peer group, behind Celgene Corporation (Nasdaq: CELG). Its margins have remained stable over the last four years with a slight upward trend. 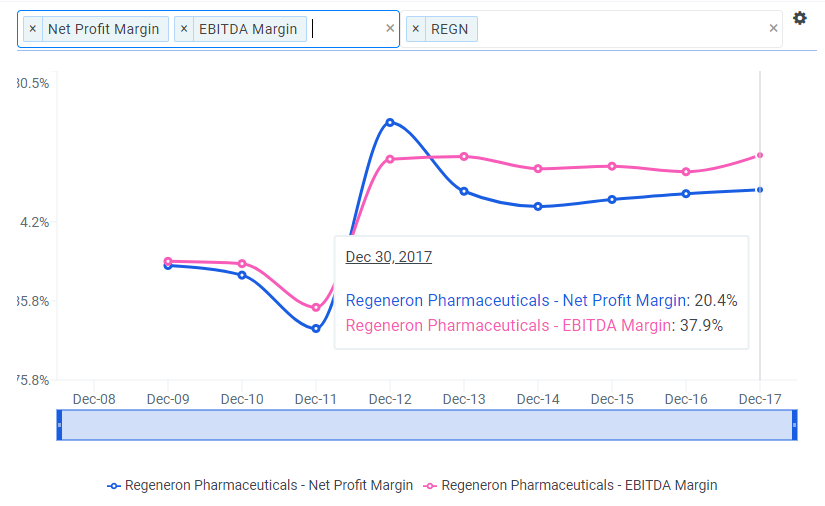 The company continues to invest in R&D, growing it nearly 18% annually over the last three years. This growth, and its 35.3% R&D Margin are typical for its peer group. 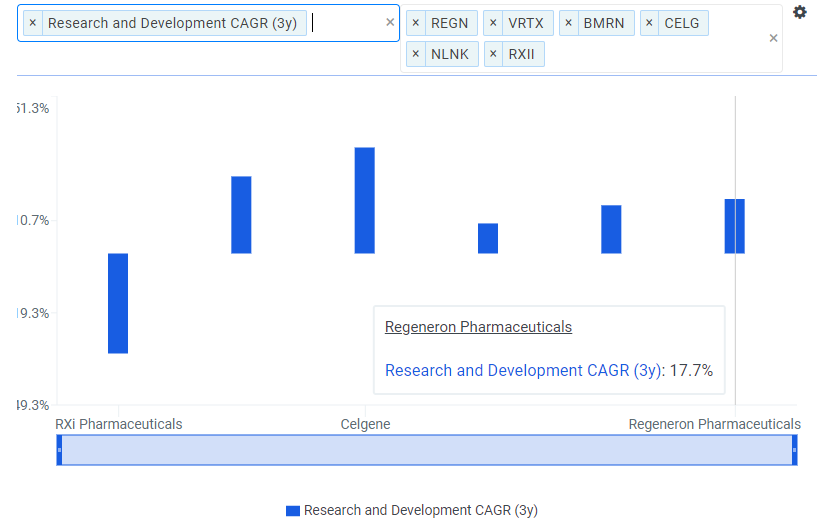 Regeneron has added debt in the last year, pushing total debt to $703 million. However, as shown below, it has 2x more cash on hand than debt. It also has nearly 2x cash flow as debt. The firm's Debt/Equity ratio is towards the bottom of its peers at 11.4%. 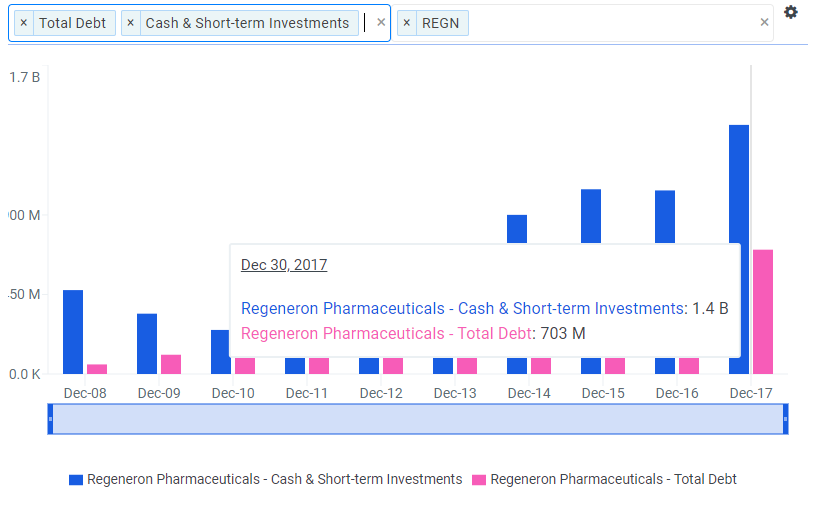 Management appears to be executing well compared to its peers. It sweeps finbox.io's Profit Benchmarks and shows how it differs from its peers by actually having positive returns. Its collaboration agreements on drug development and sales mean that it shares the profits and losses. This helps level out the highs and lows for the company. The Return on Invested Capital ("ROIC") and ROE are particularly impressive. 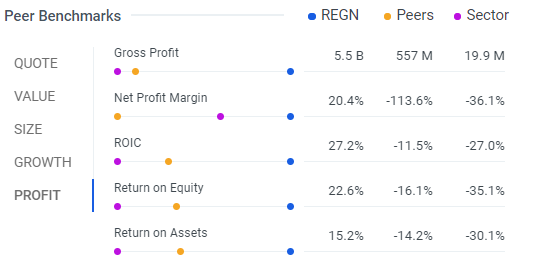 The firm reports earnings on May 3. Its three earnings beats in a row indicate that it has been able to manage expectations. Recommendations have slightly improved with zero sells and 13 accumulates tempered by 13 holds. For the year, analysts are forecasting 12.9% bottom-line growth followed by 13.5% in 2019. Drug trials and approvals are fairly transparent, so analysts will be watching for the uptake of Regeneron's newer launches and trajectory of its workhorse Eylea. 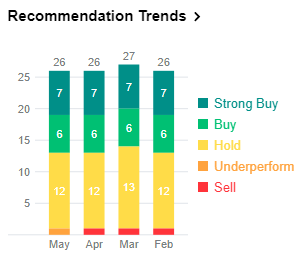 Beaten Down, But Prognosis Is Good 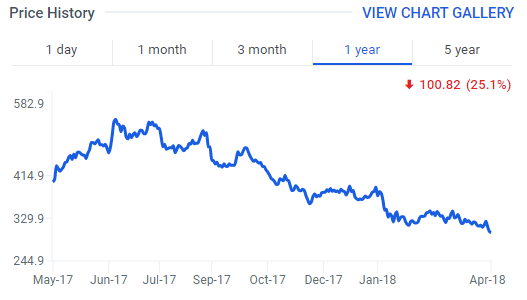 Despite earnings beats, bottom-line growth, and a pipeline that might hold a few home runs, Regeneron has been out of favor with investors. It is in the S&P 500 and Nasdaq 100, so it is widely owned by indices. Ownership by style is where expected for a GARP stock, concentrated in Large Blend, which is important to check in order to understand how investors will react to market moves.

Regeneron's trailing and forward P/E's show it a bit undervalued compared to its peers. Only Vertex Pharmaceuticals Incorporated (Nasdaq: VRTX, highest P/E's) and Celgene (lowest) have positive EPS on both measures, and can, therefore, be charted. 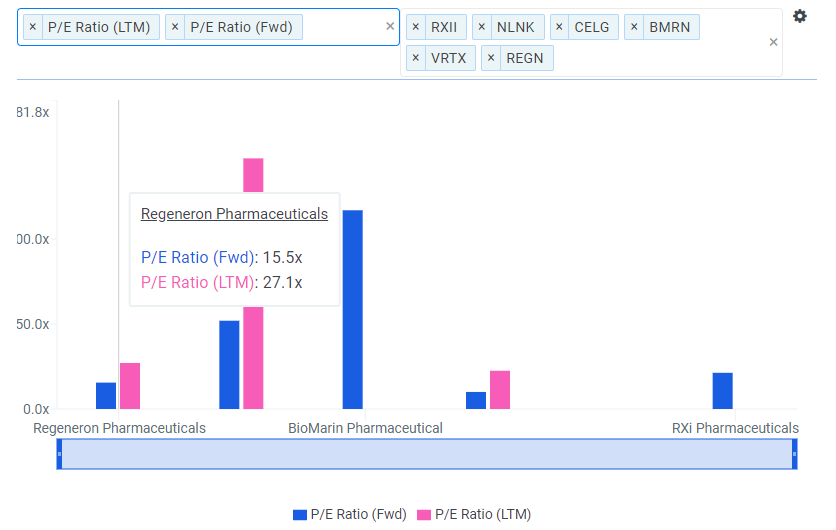 Measuring by sales ensures that numbers are available, and make for a purer comp as the top-line numbers are generally less engineered than earnings. Based on sales, Regeneron is the second most undervalued stock in the group, essentially tied with Celgene. 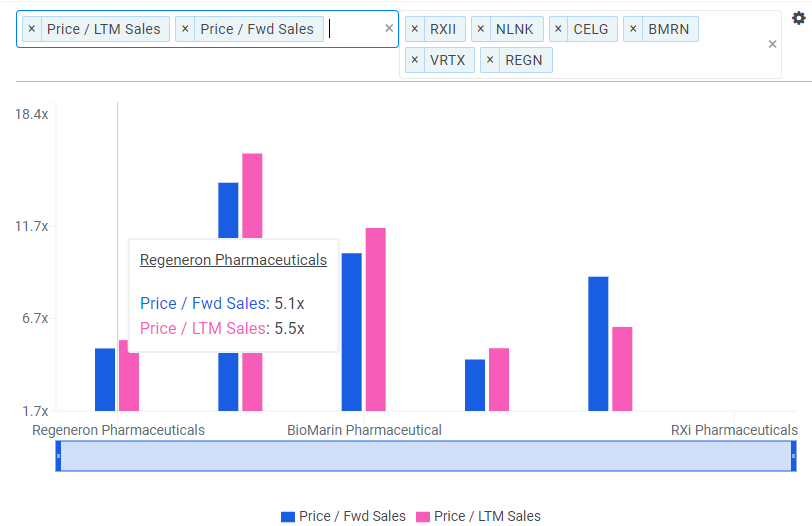 The last multiple is even tougher for biotech companies - it requires free cash flow - meaning cash left over for investors. Only two of its five peers generate FCF, and assuming the other companies have infinite Enterprise Value/FCF multiples, Regeneron again falls on the undervalued side. 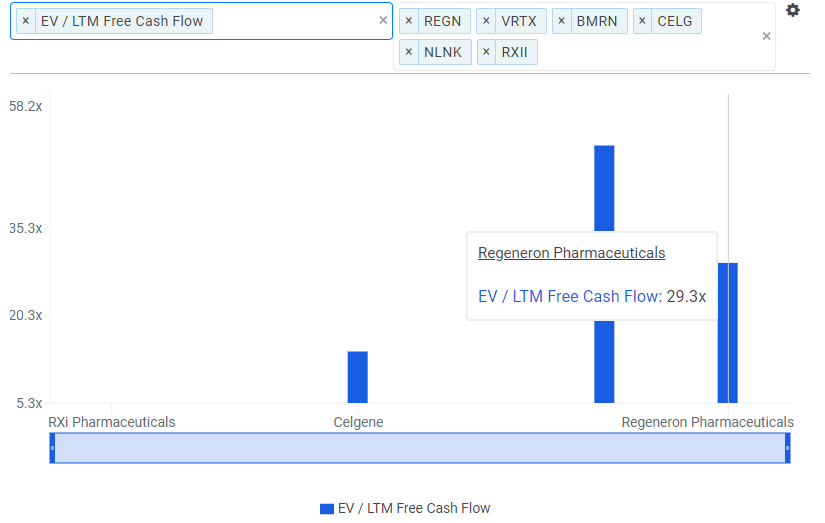 Wall Street targets and finbox.io's Fair Value confirm the prescription for appreciation. Wall Street expects the stock to gain 40.6% based on 21 analysts, and finbox.io's composite valuation model points to 33.2%. While Celgene met the short interest ratio, Forward PEG, and most other screen requirements, it was filtered out of the GARP candidate list because the quant models and Wall Street were not in sync. Analysts see 33.1% upside, while finbox.io's quant model is only at 7.9% with high uncertainty. 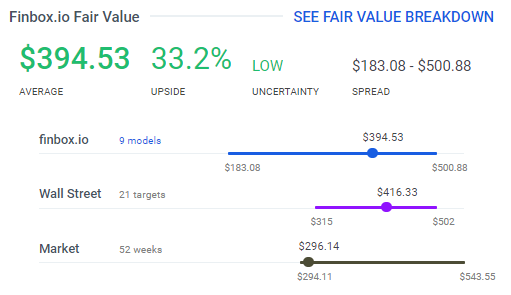 Regeneron's stock price fall over the last 10 months is not supported by the numbers. With a broadening portfolio of drugs on the market and a few aces up their sleeve in the pipeline, the company is set to prove to investors that it is not a one-trick pony. Its deal with Express Scripts, broadening of Eylena's uses, and international approvals of Dupixent should help the bottom-line sooner than later. Management has a track record of delivering steady top and bottom-line growth and industry-leading margins. ROE and ROIC metrics also confirm the executive team is firing on all cylinders.

With the Fed holding off on raising rates and calming fears for a knee-jerk reaction to inflation, the market may be a little more hospitable to Regeneron. Sales and earnings-price multiples, along with EV/FCF, indicate the stock is undervalued relative to its competitors. Wall Street and finbox.io's quant model also point to upside potential. Regeneron's price trend may be a bitter pill to swallow, but the stock's intrinsic value looks to be good medicine. 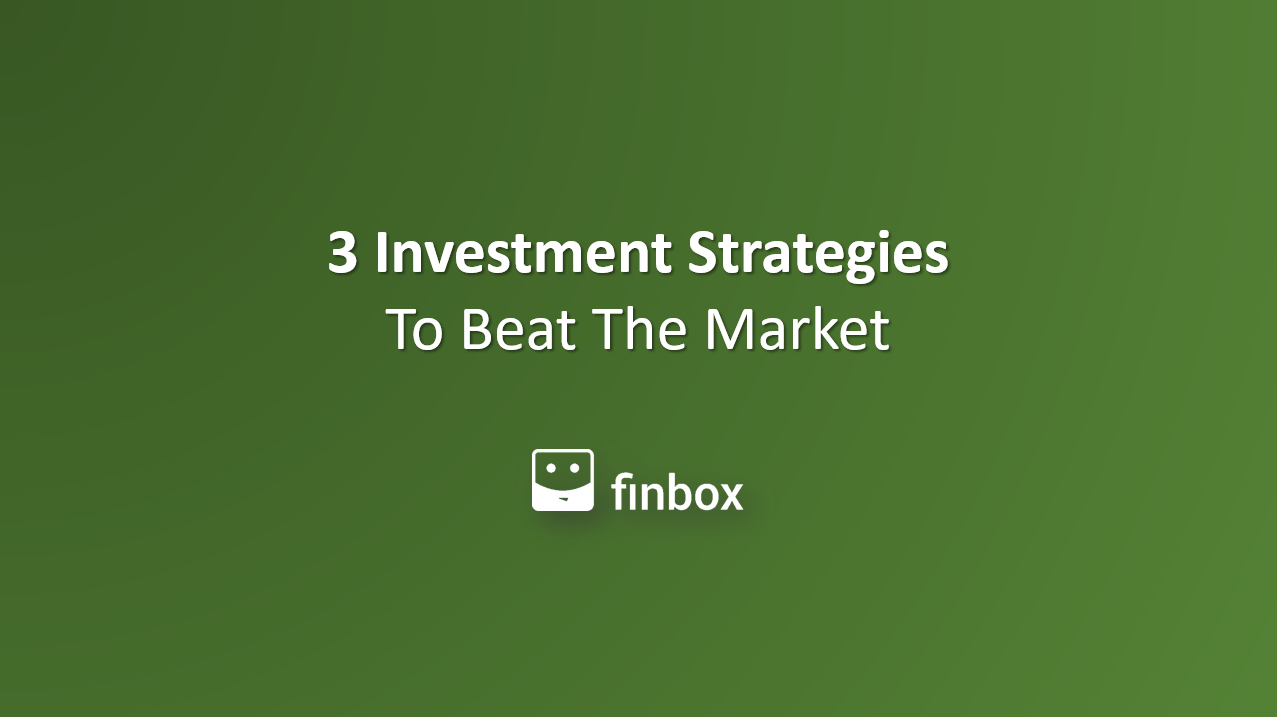 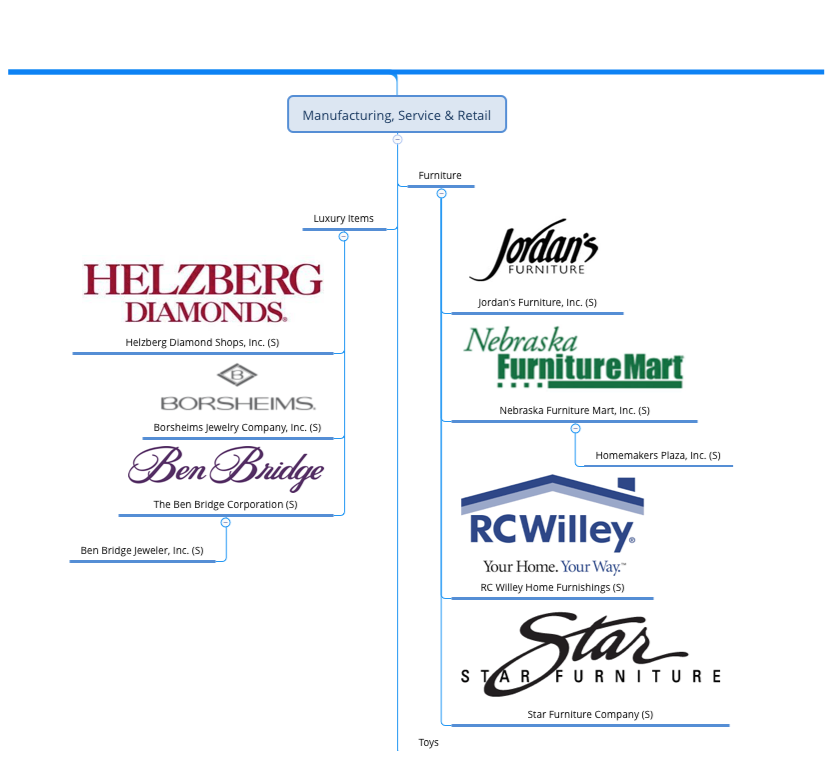 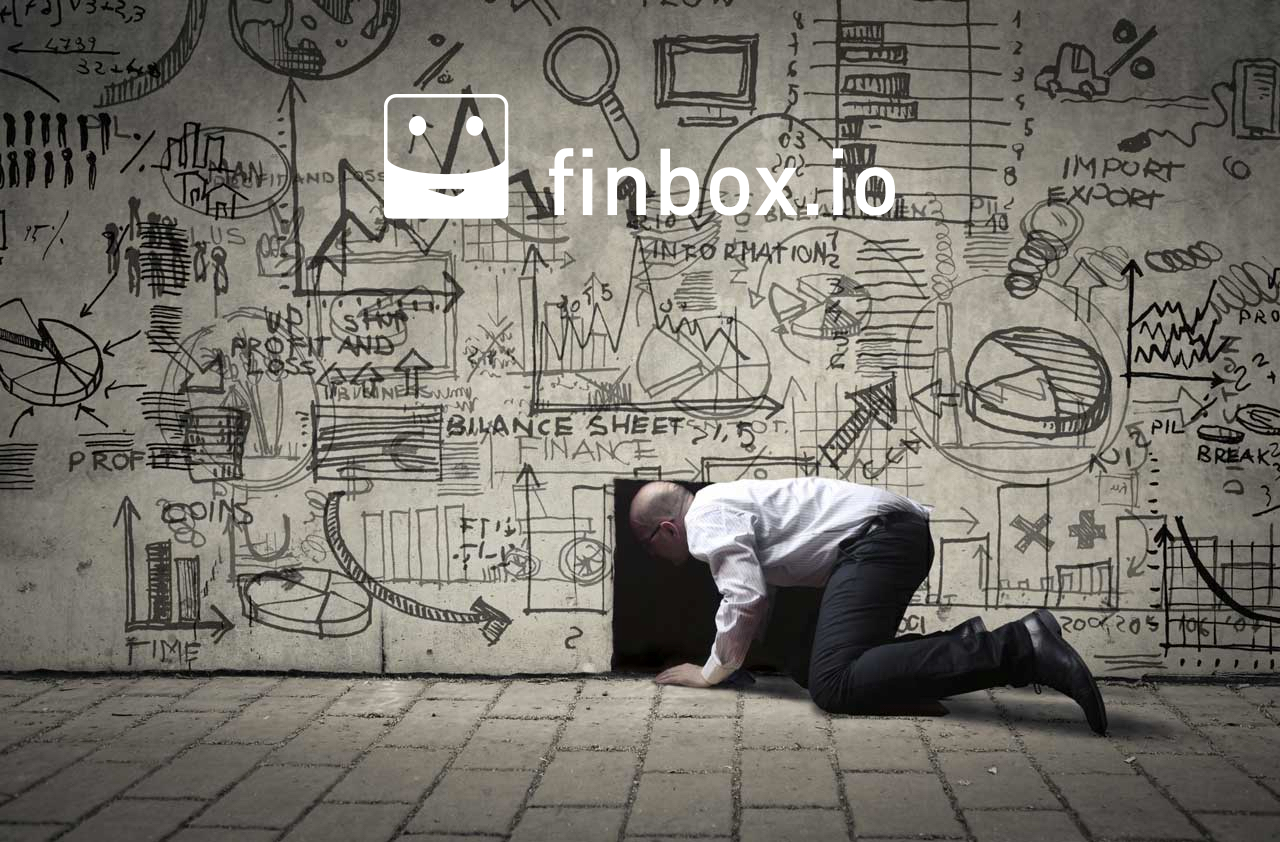 How To Invest In Businesses With Hidden Value Assets