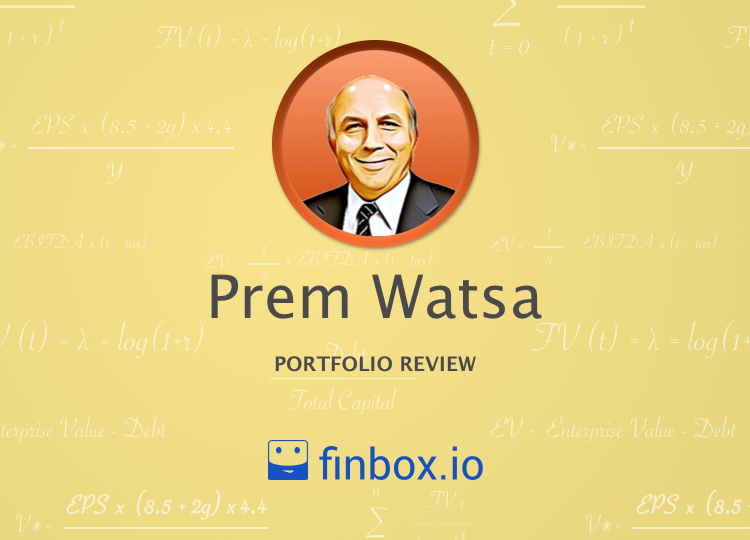 How Prem Watsa became one of Canada's most successful investors and an analysis of his current equity portfolio revealing a huge bet on one stock.

Prem Watsa left India with 8 Rupees and a dream … now he’s one of Canada’s most successful investors and has been nicknamed “the Warren Buffet of the North”. Don’t be alarmed if you’ve never heard of him, Watsa seems to steer clear of the limelight and financial media, and instead focuses on his company and various board and university positions.

Watsa was born on August 5, 1950, and grew up in Hyderabad, India. He attended the prestigious Indian Institute of Technology in 1971 where he earned a bachelor’s degree in chemical engineering. Seeing opportunity abroad, Watsa joined his brother in Canada in 1972 with 8 Rupees to his name and a $600 draft towards his first year of tuition. After a year and half of applying, Watsa was admitted to the University of Western Ontario in London, where he completed an MBA at what would later become the Richard Ivey School of Business.

In 1974 Watsa took his first job at an insurance company named Confederation Life. He’d spend 10 years there, learning security analysis from the Director of Research, John Watson, and building up a network of contacts and high net worth individuals that he would later leverage. In 1985, Watsa and four partners took the leap and bought a struggling Canadian trucking insurance company called Markel Financial for $5 million, and by 1987 they had renamed it Fairfax Financial. This is where the real story starts.

Betting Against the U.S. Housing Market

Like his more famous contemporaries featured in the “Big Short”, Watsa profited from the greatest trade in a generation by being short the U.S. housing market in 2007-2008.

As of Q3' 2007, Fairfax and its subsidiaries owned an enormous credit default swap (CDS) book of around $18.5 billion notional on about 25 to 30 companies, the majority of which were bond insurers and mortgage lenders. In the housing bubble and financial crisis years of 2008-2009, Fairfax was as one of the few companies that were able to grow through outstanding investment returns, increasing its equity base from $4.1 billion to $7.4 billion, resulting in an increase in book value per share of 61% (not including dividends). This was far more than any company in the financial industry.

As of the last twelve months, Fairfax has generated revenue of over $16 billion and operates globally through local subsidiaries. Below, I take a closer look at the company's direct investments in public equities.

Fairfax Financial's stock portfolio totals nearly $1.2 billion according to the latest filing. The list value of stock holdings is up 8.2% when compared to the last quarter. As a benchmark, the S&P 500 was up 3.9% over the same period.

Quarter-over-Quarter Turnover (QoQ Turnover) measures the level of trading activity in a portfolio. Fairfax Financial's QoQ Turnover for the latest quarter was 6.9%, so the firm likely has high conviction in these holdings as indicated by the low turnover ratio. This is another indication that Prem Watsa's investing strategy is similar to that of Warren Buffett's.

The Ideas section of finbox.io tracks top investors and trending investment themes. You can get the latest data on the holdings discussed below at the Prem Watsa page. The following table summarizes his firm's largest holdings reported in the last filing:

The seven positions above represent 88.8% of the fund's total portfolio. It was interesting to see Blackberry make up such a significant portion of the portfolio. In June 2008, shares of Blackberry traded above $144 per share and now only trade at $10.65 as of December 14th, 2017.

However, digging back into prior 13F filings revealed that Fairfax Financial first disclosed its Blackberry position in Q3 2013 when the stock was trading around $8 per share. The stock has since appreciated netting a paper profit of 33% on the position.

Managers with more than $100 million in qualifying assets under management are required to disclose their holdings to the SEC each quarter via 13F filings. Qualifying assets include long positions in U.S. equities and ADRs, call/put options, and convertible debt securities. Shorts, cash positions, foreign investments and other assets are not included. It is important to note that these filings are due 45 days after the quarter end date. Therefore, Fairfax Financial's holdings above represent positions held as of September 30th and not necessarily reflective of the fund's current stock holdings.