With October now behind us, it’s again time to see how well our finbox.io fair value estimates performed. Note that this is not an update to our September report due to slight changes in how we determine fair value uncertainty. Read more on this subject here.

October returns for each of the four groups compared to the S&P 500, Dow Jones and the Nasdaq are shown below.

Similar to the insights drawn from the September report, the story becomes clearer when comparing October’s returns by Market Capitalization.

There were 373 stocks (of the 1,233) that had a market cap greater than $10 billion. October returns for these stocks relative to the S&P 500 are shown below. 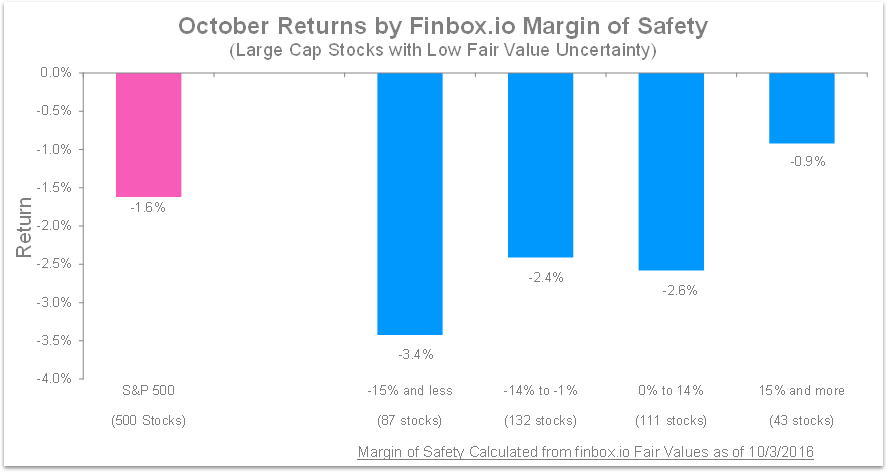 There were 750 stocks (of the 1,233) that had a market cap greater than $2 billion. October returns for these stocks were also benchmarked against the S&P 500 as shown below. 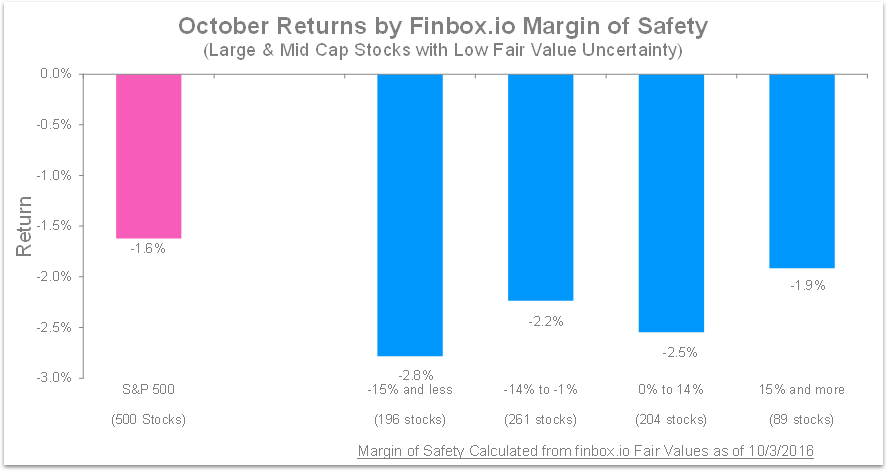 There were 356 stocks (of the 1,233) that had a market cap between $300 million and $2 billion. October returns for these stocks are shown below. 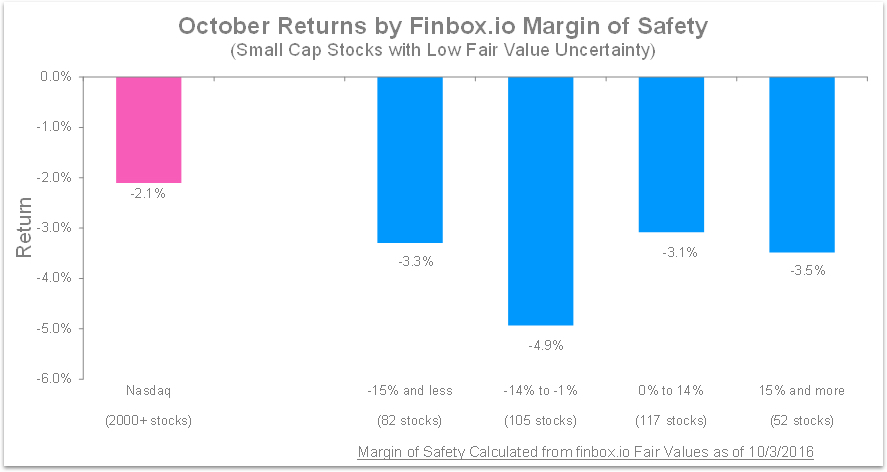 It was interesting to find that the small cap stocks with the most upside returned -3.5% in October. These smaller stocks typically having less liquidity relative to larger cap stocks so this result is not entirely surprising. It will likely take longer for these companies to track their fair values.

By popular demand, October returns by sector are shown in the chart below.

Note how the Energy sector stocks with 15% or greater margin of safety outperformed in October (+2.2%).

The Healthcare sector is another interesting development. Healthcare companies with the most upside significantly underperformed in October returning -10.4%. Value investors may want to take a closer look at this sector with many stocks trading well below their intrinsic value.

One of the major storylines we were watching (via our September performance report) was how our most overvalued large cap stocks would perform in October. This segment had been an outlier returning 1.1% in September compared to the S&P 500’s -0.1%.

We expected a pull back in this group over the coming months and October did not disappoint. Our most overvalued large cap stocks returned -3.4% in October (vs S&P 500's -1.6%) as these companies began to track their underlying fundamentals.

A new development to watch in November is how our most undervalued Healthcare stocks perform. While major market indices were down in October, this group traded significantly lower (-10.4%). It will be interesting to see if these companies will make a comeback over the coming months.

Disclaimer
Finbox.io fair value estimates are not intended to be soley relied upon. They are intended to be a starting point for fundamental analyst’s investment research.

Next story Market is Undervaluing Cisco by Over 30%

Previous story How to Choose the Right Stock Valuation Method