It is tough to believe in this day and age that access to technological advancements is not immediate. Digitally, advances can be leveraged almost instantly with the download of an app or purchase of a new device. In medicine, there are numerous hurdles to monetize innovation. Regulation, such as approval by the FDA in the U.S., is necessary to enter the market. However, companies like NuVasive (Nasdaq: NUVA), which has invented new surgical devices and procedures for spine-related issues, face additional obstacles including acceptance by health insurers, surgeon buy-in and training, hospital investment, and limited history of patient results. Overcoming these obstacles can pay off though, especially with an aging global population and more affluent emerging markets.

The world-wide market for spinal procedure devices was estimated to be around $10 billion in 2015, according to NuVasive competitor Globus Medical (NYSE: GMED), and predicted to grow to $17 billion by 2021. The focus of NuVasive has been in the area of minimally invasive (MI) procedures, which are still gaining acceptance. Nearly 30% of spinal procedures are minimally invasive, resulting in less tissue damage, quicker recoveries, and higher operating room margins for hospitals. The share of MI procedures, NuVasive’s specialty, is expected to grow to 70% by 2025. Despite its historic MI innovation, the company has been expanding logically with the goal of providing a “soup to nuts” offering for spinal surgery.

NuVasive, Inc. claims to be the biggest pure-play, and third largest player in the MI spinal surgery market. It faces competition from giant multi-national firms with mostly piecemeal offerings as a result of acquisitions. Innovation is not always enough to challenge well-funded competitors, and management has put together a suite of products that together provide hospitals a simple and efficient path to profit from the growth in MI spinal procedures.

Management has a very strong focus on investor return. To drive this point home to workers, they are officially called shareholders rather than employees. As shown below, the company has delivered on growth. The near-term thesis for investment is to benefit from international growth and cost containment. 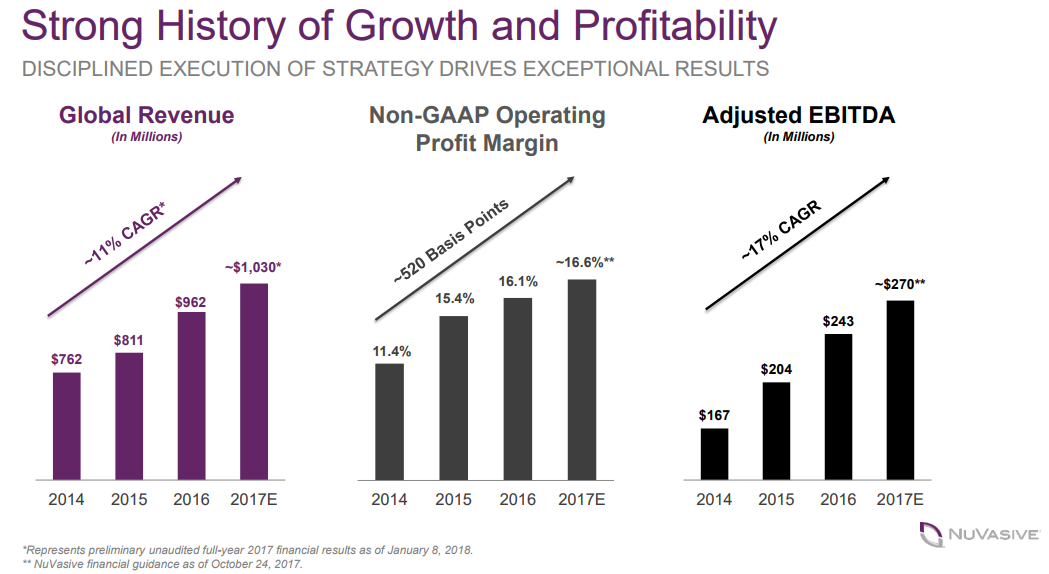 The company has reported 26% international growth over the last four years, and a room-to-expand 4% international market share. Continued investment in the Asia and Western Europe markets should continue to pay off. The chart below highlights the slower spinal surgery procedure growth in the mature North American market, and the potential in the Asia-Pacific region. Note that the highest growth in each region is minimally invasive surgeries (grey bar). 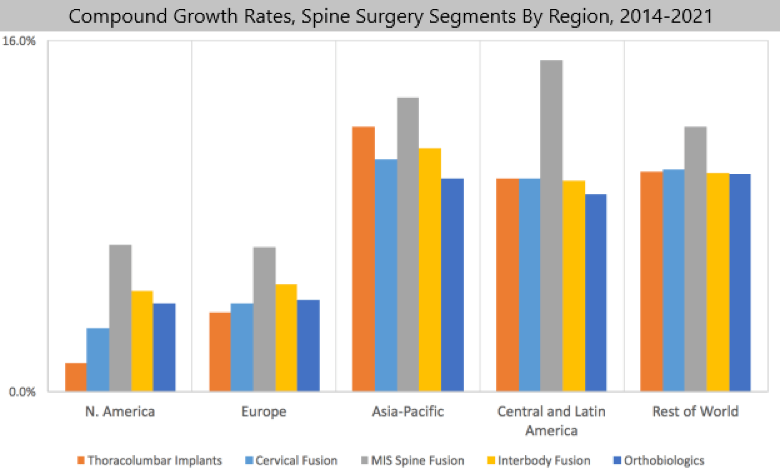 In response to flattening growth in North America, the company has embarked on a cost containment program. NuVasive opened their own factory in the U.S. in 2017 to help manage inventory and production costs yielding an expected four percentage point benefit to profit margin, as seen in management’s chart below. Overall, the company expects its focus on costs to expand profit margins by 12 percentage points over the long-term. Importantly, R&D investment is not on the cutting floor, and is expected to continue to grow with revenue. 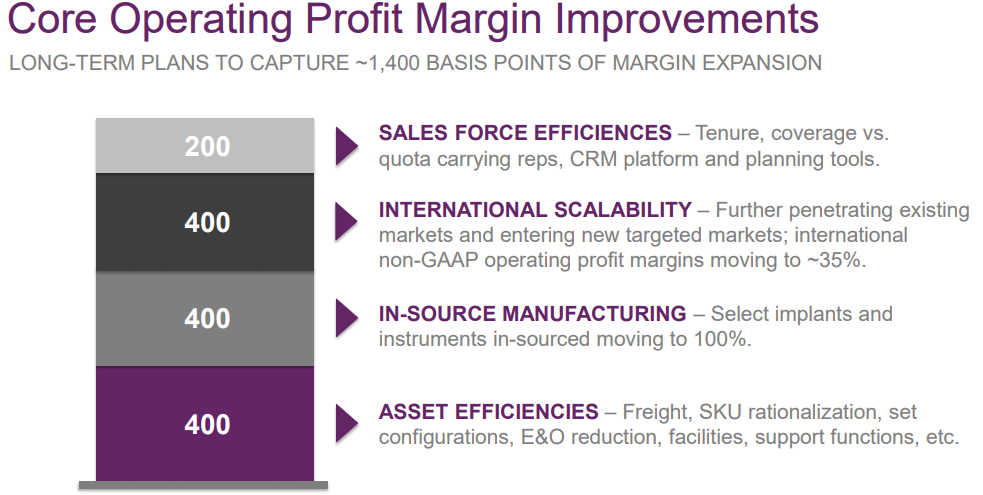 There are a number of challenges a medical device maker faces, including proving value to insurers, getting hospital buy-in, training and educating surgeons, and seeking governmental approval.

In the U.S., health reform has driven insurers to combine, narrow provider offerings, and eschew innovation in some cases. Limiting the number of providers means fewer doctors, which decreases the chances that surgeons trained to used NuVasive’s devices and procedures are available. In addition, spinal fusions are not fully covered by Medicare, which only pays the professional fees for the surgeon, at very low rates. Supplemental Medicare insurance will typically cover the facility fee.

However, there is good news as the track record for MI surgeries grows. The Blue Cross Blue Shield Association has upgraded its quality evidence recommendation for some minimally invasive spinal fusion techniques. Continued acceptance of MI procedures is a positive, especially when it involves an insurer that covers more than 100 million people, according to Becker’s Spine Review.

As hospitals have merged, medical device makers face tougher negotiations and a margin squeeze. Getting to the point of negotiation is tough in itself when selling newer technology. The hospitals must have surgeons that can perform the procedures, and must invest in specialized operating rooms and equipment.

MI spinal surgery has not been immediately adopted by surgeons for a number of reasons. Resistance to change is one of them, but a major issue is visibility of the impacted area. In traditional fusion surgery, the area is fully exposed through a major incision. With MI surgery, small incisions, generally in the side of the patient with NuVasive, require surgeons to use new tools and methods, with a restricted view. Surgeons also need to invest time and effort in training, and have access to the proper facility.

All of the issues above first require approval from governments before they become challenges. The approval process is not cheap, easy, or standardized.

Both Wall Street analysts and finbox.io’s fair value validate the company’s growth story, and agree that the market has pushed the price too low. Based on the February 15th close of $48.21, Wall Street analysts are forecasting a ~45% gain with a target price of $69.33. Finbox.io’s fair value estimate, a quantitative composite based on nine individual models, is more conservative with a target price of $62.45 yielding an upside of 29.5%.

These expectations are surprisingly positive, especially for a company with a beta of just 0.71. Finbox.io’s dashboard makes it very simple to start pulling back the curtain with a helpful set of peer comparisons. The growth metrics show NuVasive widely beating its peers and the sector. One exception is projected sales growth, where the Health Care sector is higher, but NUVA still bests its peers. Net profit growth and projected net income growth reinforce the belief that NuVasive’s cost containment will produce better margins than its peers. 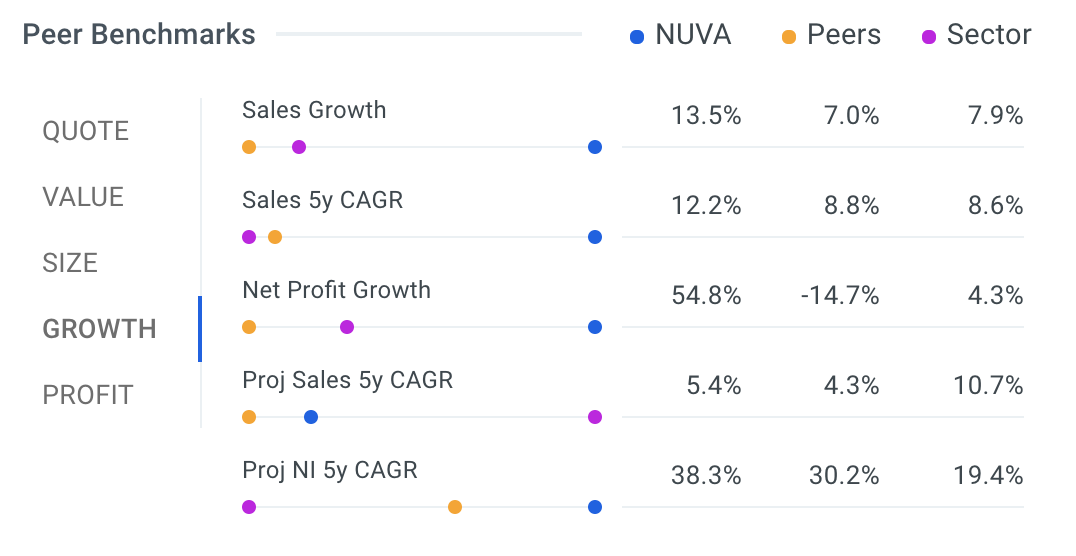 Always keeping in mind that earnings can be manipulated, taking a look at sales and cash flow is important. Especially since multi-nationals’ earnings and cash flows will be out of whack due to the recent tax reform. Previously untaxed foreign earnings can be immediately expensed in earnings, while companies have the option to spread out the actual payment of the tax over eight years, which will affect cash flow. EPS will take a one time hit, and look better compared to cash flows for years.

The chart below shows two measures that are hard to manipulate, and therefore produce better peer comparisons. Price/Sales is an easy to understand revenue multiple, which in this case points to NuVasive being relatively underpriced against its peers. Only Allied Healthcare is lower.

Enterprise Value/Free Cash Flow is not as simple a metric, as it compares the theoretical cost to purchase the entire company to the cash left over for shareholders. NuVasive trades at the lowest multiple amongst its peers, again suggesting the stock is priced attractively. The data for this metric was not available for Nevro and Allied Healthcare. 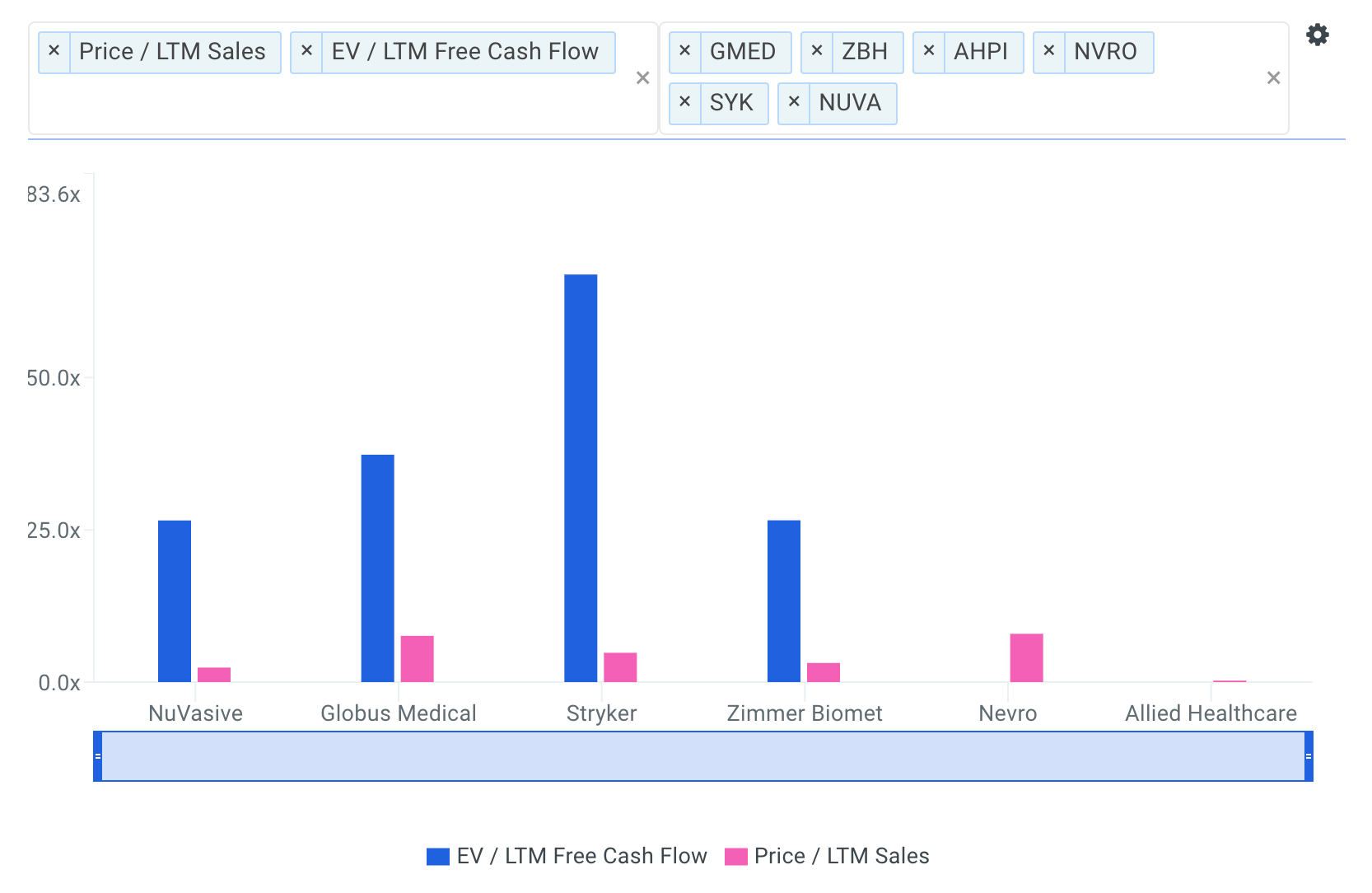 Earnings Multiples Not So Hot

On the earnings front, the stock’s Price/Earnings ratio is at the lower end of its peers, which is positive. The company is trading at 36.2x its earnings per share, which is considered a high multiple in general, but reasonable in an innovative peer group. Its Forward Price/Earnings, which is based on forecasted earnings, is middling in the pack. This is a potential red flag, indicating that when factoring in expectations, the stock may be fairly priced in comparison. 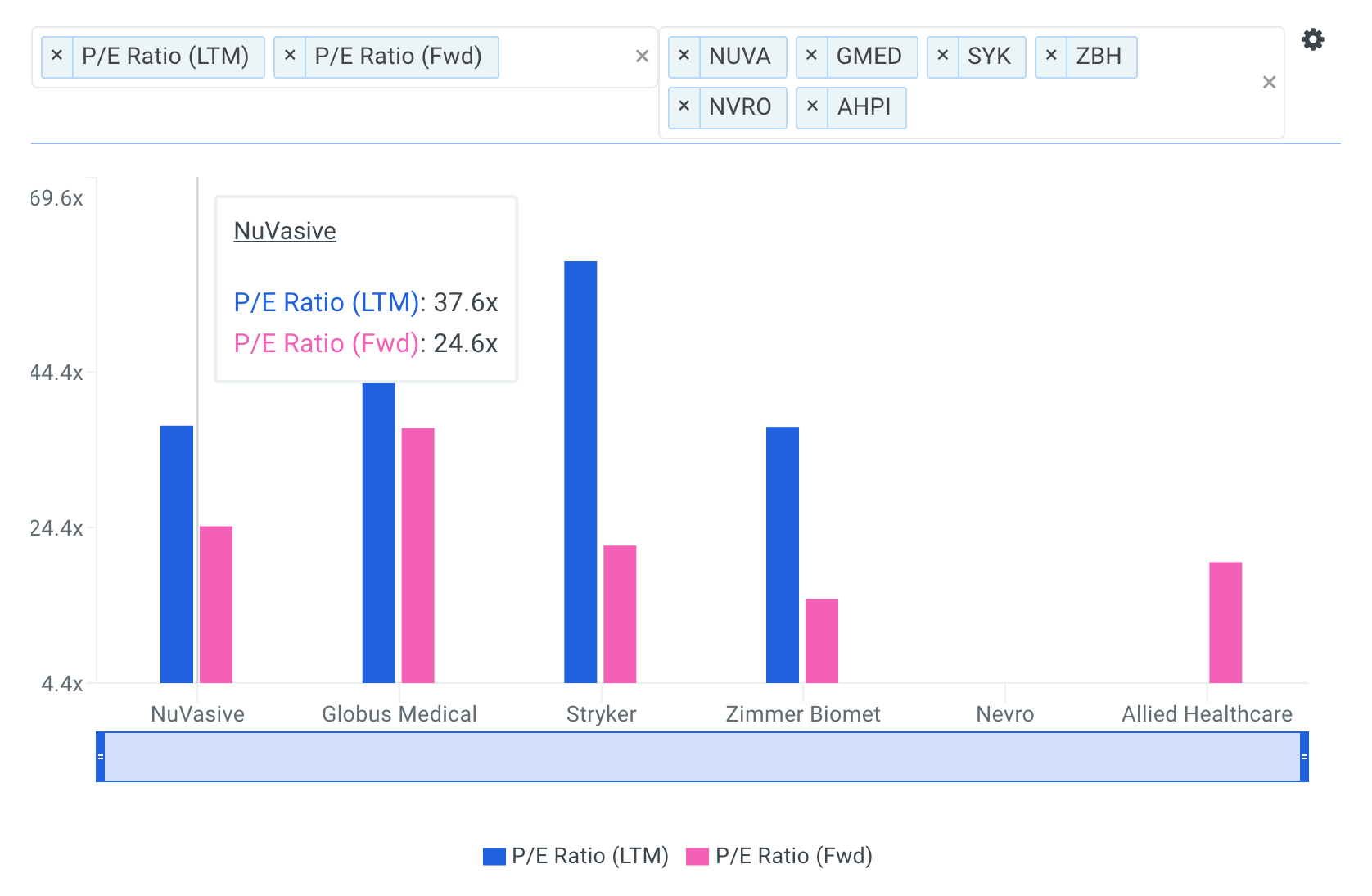 NuVasive, Inc. reports year end 2017 on February 26th. The company released unaudited 2017 results on January 8, so there should not be any material negative surprises versus Wall Street estimates.

Management has been very positive on the effects of the recent tax reform. They have so far predicted that starting in 2018, earnings and cash flow should increase 10%. An estimated 2018 tax rate of 33% will fall to mid-20%, and management expects to direct savings towards R&D, aside from a recently launched share repurchase program.

While investments in R&D and creating full-service product suites set the stage for a compelling future, the true driver for NUVA’s 25%+ upside is continued international growth. NuVasive should be able to maintain its history of 20% annual international sales growth. Management’s focus and continuing delivery on growth should be reassuring to investors.

The stock is underpriced compared to its peers based on the EV/FCF and Price/Sales multiples, which confirms Wall Street analysts’ 45% target gain and finbox.io’s quantitative fair value composite’s 29.5% upside. Attractive pricing, positive sentiment, and international growth bode well for NuVasive.