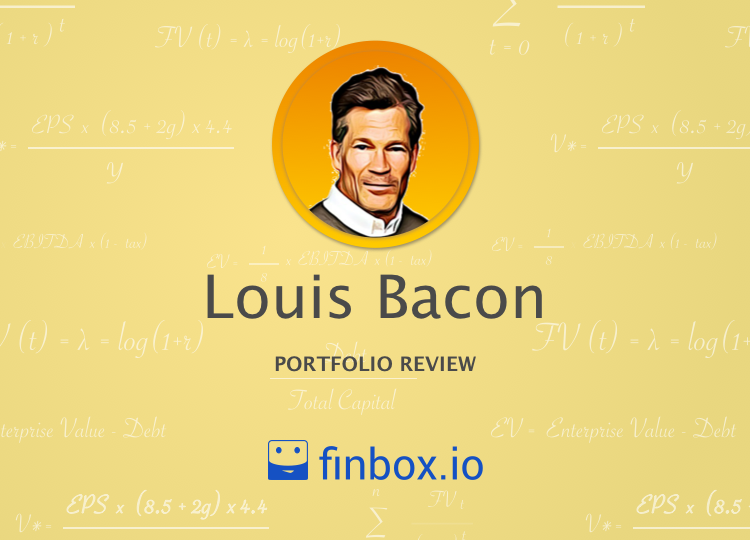 I take a closer look at Louis Bacon and his fund's list of stock holdings where values have increased by more than 50% from the previous quarter.

From Poet To Financial Wizard

Louis Bacon was born in Raleigh, North Carolina on July 25, 1956. Bacon’s father, Zachary Bacon Jr., ran the North Carolina real estate operations of both Prudential and later Merrill Lynch & Co. Interestingly, Bacon received his BA in American Literature from Middlebury College in Vermont. His favorite professor, Horace Beck, saw no signs of a financial wizard back in those days. However, he did get a taste of Wall Street during his summer breaks, where he worked as a clerk for New York Stock Exchange specialist Walter N. Frank & Co.

The small taste of Wall Street apparently had Bacon hooked, and upon finishing college he landed a job as a clerk on the New York Coffee, Cocoa and Sugar exchanges. He subsequently received his MBA degree in finance at Columbia Business School in 1981, but continued to trade during his studies using his student loan as capital. Like many traders before him, Bacon lost all of his capital and had to work odd jobs or borrow money from his family.

By the time 1983 rolled around Bacon was at Shearson Lehman Hutton working as a futures broker. At 27 years of age, he had an impressive list of clients including some of the heavy hitters of the hedge fund industry. Thanks to these relationships with fund managers like Paul Tudor Jones, who ran some of his Soros funds orders through Bacon, he quickly became a top commission producer.

Most traders don’t get the types of opportunities that Bacon did, and even those that do aren’t as successful. One big advantage to trading on behalf of hedge funds was that he could learn their strategies. By 1986 Bacon had built up enough of a reputation that he began managing money, and in 1987, while still at Shearson, he set up a small fund called Remington Investment Strategies.

Whether it was luck, skill, or a combination of both, Bacon hit a home run in the 1987 crash. Anticipating the crash he was short S&P futures, and then shifted long just as the market bottomed. Not only did this make his fund a ton of money, it also enhanced his reputation as a money manager. By 1989 he had a strong track record and decided to set up Moore Capital with $100 million under management.

Early investors were rewarded with an 86% return in the first year. His returns, plus the fact that Paul Tudor Jones closed his fund to new money and recommended Bacon, boosted his fund to $200 million by 1990. It has been reported that Moore Capital has returned 31% annually after fees since its inception.

Bacon is relatively tight-lipped about his macro-trading style. Forbes once described his investment strategy as “secretive, risk-conscious, a bit paranoid.” This is not entirely surprising given that Bacon had previously retreated to family and friends after losing all his capital once already.

Below, I take a closer look at Moore Capital's direct investments in public equities.

Moore Capital's stock portfolio totals nearly $4.9 billion according to the latest filing. The list value of stock holdings is up 52.3% when compared to the last quarter. As a benchmark, the S&P 500 was up 3.9% over the same period.

Quarter-over-Quarter Turnover (QoQ Turnover) measures the level of trading activity in a portfolio. Moore Capital's QoQ Turnover for the latest quarter was 75.2%, so the firm appears to trade a significant percent of its portfolio each quarter.

The Ideas section of finbox.io tracks top investors and trending investment themes. You can get the latest data on the holdings discussed below at the Louis Bacon page. The following table summarizes his firm's largest holdings reported in the last filing:

The seven positions above represent 38.0% of the hedge fund's total portfolio.

To find stocks in his portfolio that may be unpopular at the moment and trading at cheap valuations, I ranked his holdings by price pullbacks. The ranking table below lists the stocks in Moore Capital’s portfolio by stock price performance over the last 30 days.

Managers with more than $100 million in qualifying assets under management are required to disclose their holdings to the SEC each quarter via 13F filings. Qualifying assets include long positions in U.S. equities and ADRs, call/put options, and convertible debt securities. Shorts, cash positions, foreign investments and other assets are not included. It is important to note that these filings are due 45 days after the quarter end date. Therefore, Moore Capital's holdings above represent positions held as of September 30th and not necessarily reflective of the fund's current stock holdings.