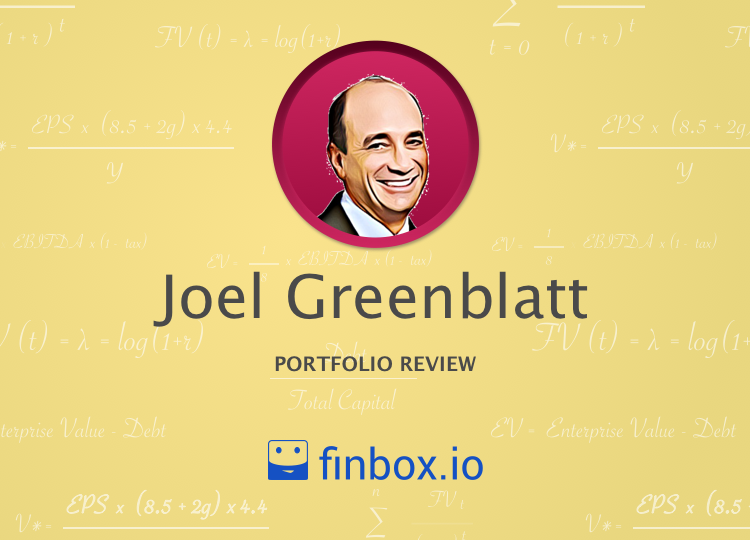 Joel Greenblatt is an investor, writer and academic. He is probably best known for the books he has written, but also manages funds and frequently lectures on investing. He has developed a very specific style of value investing, termed Magic Formula Investing, which has permeated his writing and investing businesses.

In 1997 Greenblatt wrote You Can Be a Stock Market Genius and in 2005 he wrote The Little Book that Beat the Market. Both were bestsellers, and continue to feature on lists of the best investment books to read. Then in 2010, he wrote a follow-up, The Little Book that Still Beats the Market and in 2011 he published his fourth book, The Big Secret for the Small Investor.

In 2009 Greenblatt relaunched his company as Gotham Asset Management, which he runs together with Robert Goldstein. In 2012 the firm launched a series of long/short mutual funds to complement its hedge funds. The firm’s most recently launched fund, the Gotham Index Plus fund, combines active and passive investment strategies. In 2016 the fund outperformed 95% of its peers.

However, Gotham’s funds have had mixed results since 2012. Value investing has fallen out of favor, and returns for long-short funds have been hurt by the performance of short positions. In 2015, all the funds lost money and underperformed their benchmarks, resulting in withdrawals. The funds have since recovered and as of 2017, the firm has $11.6 billion under management.

In 2009 Greenblatt started Formula Investing, an online money manager. The site is now a free stock screener, which anyone can use to filter stocks according to his formulae. He also runs a website called the Value Investors Club, where 250 members exchange their best value investing ideas.

Greenblatt is an adjunct professor at the Columbia University Graduate School of Business where he teaches "Value and Special Situation Investing." He supports education focussed charities in New York and has a special interest in Charter Schools.

Joel Greenblatt’s basic formula follows a process of first eliminating certain stocks and then ranking the rest according to earnings yield and return on capital.

He excludes stocks with a market cap below a minimum threshold (usually $50 million) as well as foreign stocks - their earnings may be swayed by currency movements. He also filters out stocks in the utility and financial sectors.

He invests in the 20-30 top-ranked stocks, usually allocating capital to 2 to 3 stocks each month. The portfolio is rebalanced annually. Greenblatt stresses that the process must be followed over a 10-15-year period to generate good returns.

Gotham’s funds all use some variation of this formula but include short positions for the lowest ranked stocks.

Gotham Capital's stock portfolio totals nearly $6.8 billion according to the latest filing. The list value of stock holdings is down -4.6% when compared to the last quarter. As a benchmark, the S&P 500 was up 3.9% over the same period.

Quarter-over-Quarter Turnover (QoQ Turnover) measures the level of trading activity in a portfolio. Gotham Capital's QoQ Turnover for the latest quarter was 36.0%, so the firm appears to trade a significant percent of its portfolio each quarter.

The Ideas section of finbox.io tracks top investors and trending investment themes. You can get the latest data on the holdings discussed below at the Joel Greenblatt page. The following table summarizes his firm's largest holdings reported in the last filing:

The seven positions above represent only 6.5% of the hedge fund's total portfolio.

The next ranking table lists the stocks in Gotham Capital’s portfolio with the best dividend yields. Dividend seekers can appreciate stocks that earn upwards of 6% excluding price appreciation and are also backed by a prominent investor.

To find stocks in his portfolio that may be unpopular at the moment and trading at cheap valuations, I ranked his holdings by price pullbacks. The ranking table below lists the stocks in Gotham Capital’s portfolio by stock price performance over the last 30 days.

Managers with more than $100 million in qualifying assets under management are required to disclose their holdings to the SEC each quarter via 13F filings. Qualifying assets include long positions in U.S. equities and ADRs, call/put options, and convertible debt securities. Shorts, cash positions, foreign investments and other assets are not included. It is important to note that these filings are due 45 days after the quarter end date. Therefore, Gotham Capital's holdings above represent positions held as of September 30th and not necessarily reflective of the fund's current stock holdings.