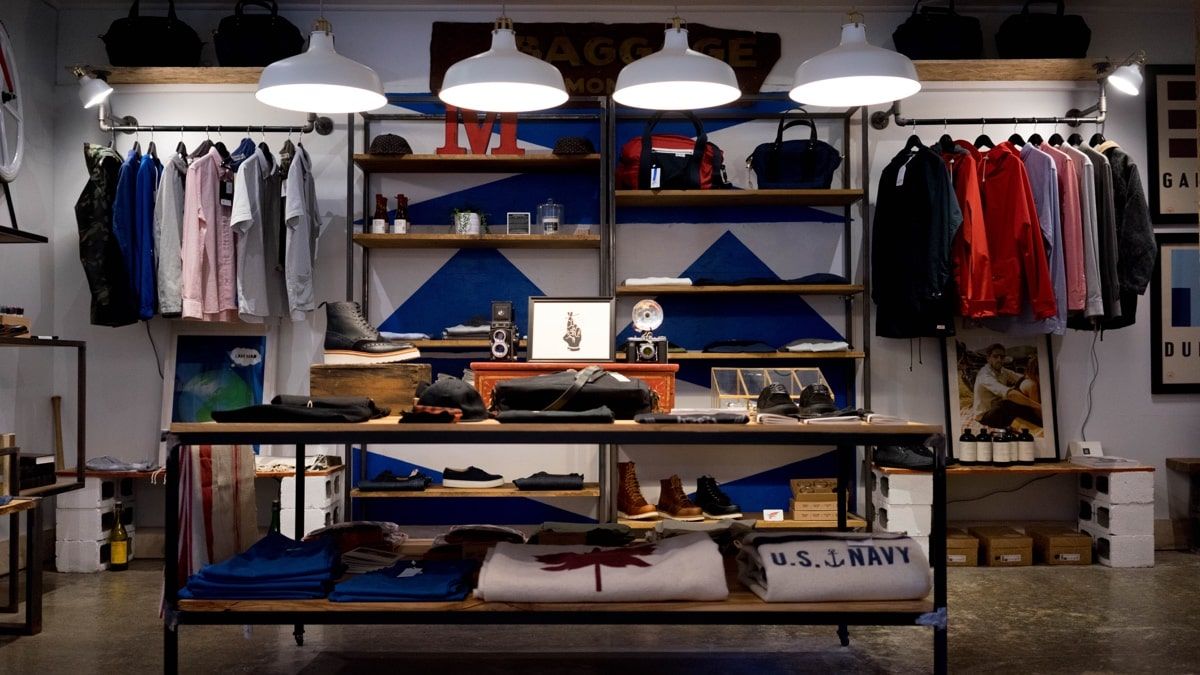 The U.S economy is expected to grow at roughly 2.5% in 2018. The recently passed tax legislation has added a few basis points to projected growth expectations and 10-20% to earnings forecasts for 2018. Adding fuel to that fire is that consumers are spending more, the savings rate is at a multiyear low near 2% down from the highs around 5% after the financial crisis. Even more bullish for the macroeconomy is that the Federal Reserve still has an accommodative monetary policy and even with three rate hikes scheduled for 2018, interest rates are at historically low levels. 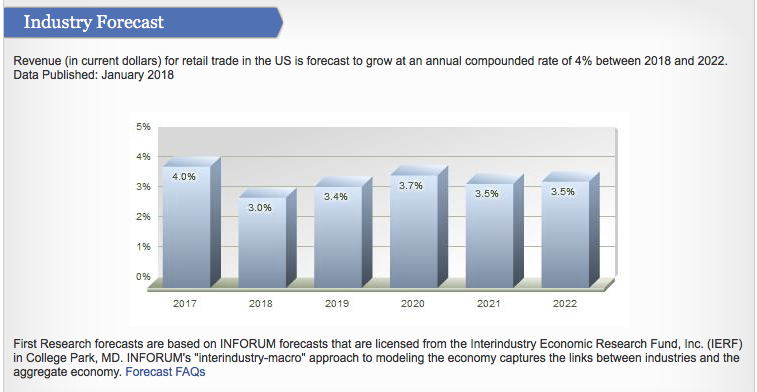 The retail sector in the United is slated to grow at a 4% compounded annual rate between 2018 and 2022. Not blazing growth, but considering the headwinds facing the retail industry in the recent past, this is a healthy clip. The expected growth in sales combined with the reduction in tax rates is a bullish outlook for retail earnings going forward. It is not all sunshine and rainbows for retail. With the growing force of rising minimum wage legislation across the country, the increased wage expense is going to be a major challenge for Macy's Inc (NYSE: M).

Macy’s Fundamentals On The Right Track

As a value investor, the fundamentals of a company are a big driver in making an investment decision. When looking under the hood at Macy’s, the fundamentals show promise. On a firm level analysis, you notice that Macy’s is competing well. In addition to competing well, the company should benefit from a continued rebound in the macroeconomy as U.S. consumer spending increases.

With those two favorable factors, why has the stock taken a beating recently? Why are sales and revenue slowing, and why are they announcing store closings across the country?

The answer is the Amazon (Nasdaq: AMZN) effect. Retailers across the country have been suffering because of the growth of Amazon. Many have gone bankrupt or nearing bankruptcy. This factor has overweighed the other two positive factors in driving stock price movement and the stock has plummeted. Macy's itself has suffered declining net sales since 2015. 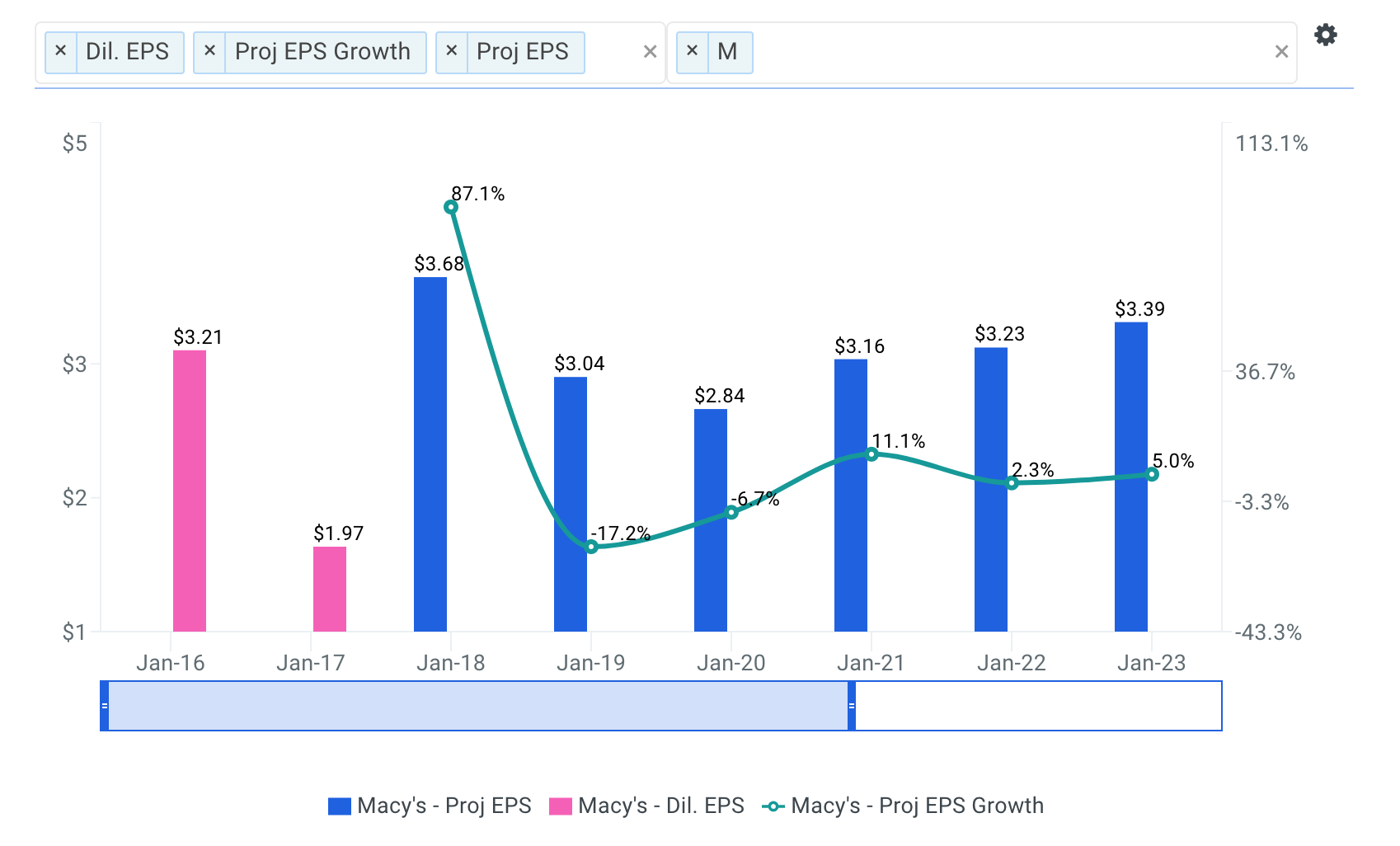 Looking forward to the earnings per share forecasts you notice that EPS took a significant drop in FY 2017 but is expected to bounce back considerably in FY 2018. These wild fluctuations in the next few years are expected to settle and Macy’s is expected to return to steady growth starting FY 2021. As Macy's becomes smaller by closing retail locations, these earnings will be derived from a smaller asset base. 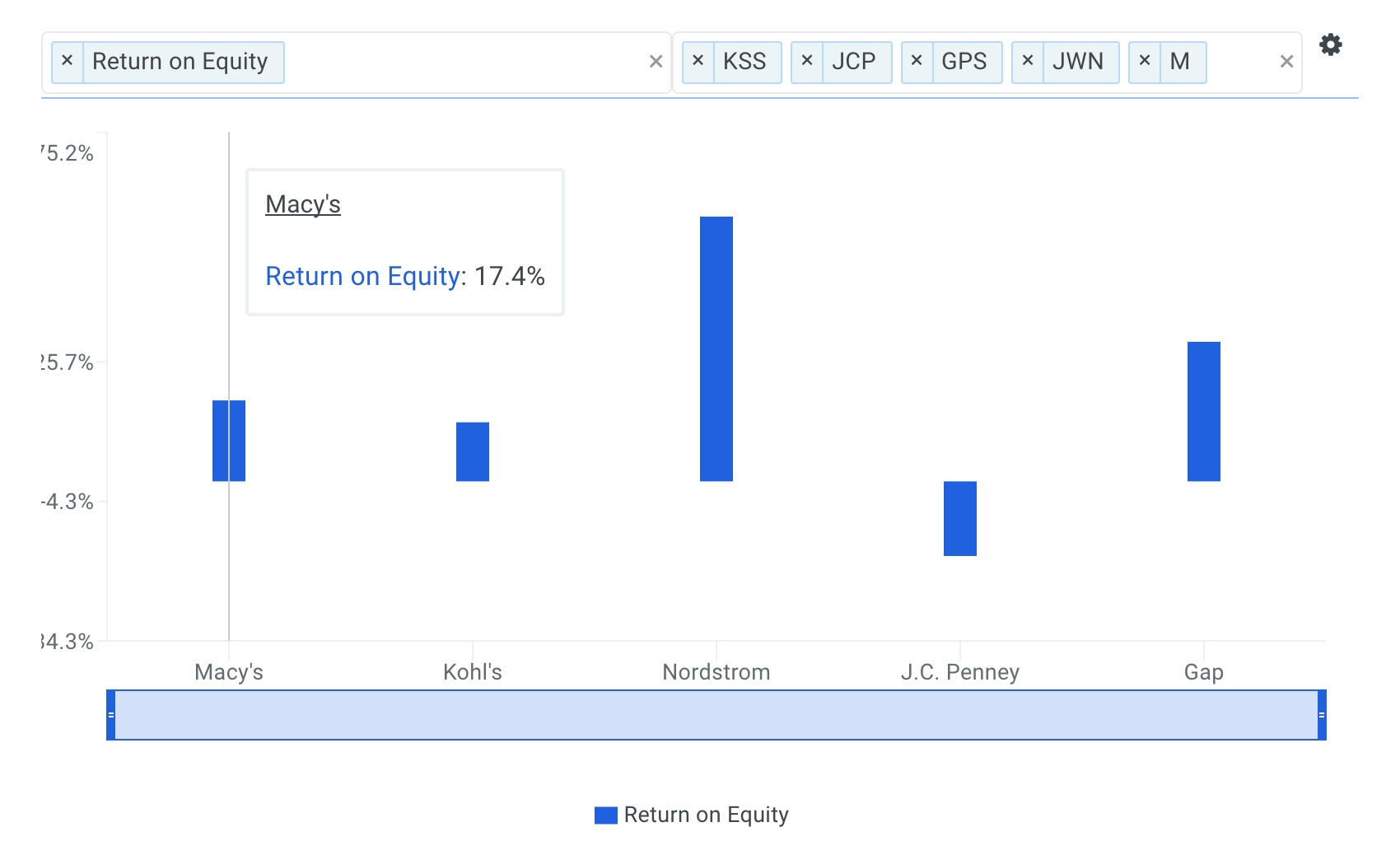 When you compare Macy’s return on equity to its peers it falls right near the middle. While they are not the best in this regard they are consistent in delivering positive ROE to shareholders. This is something that has been difficult to achieve in the sector. The ability to adapt in this way to a competitive force as strong as Amazon is a positive when analyzing the firm. As a value investor, you are concerned with the long-term and the fact that one of your holdings can withstand a strong competitive force. 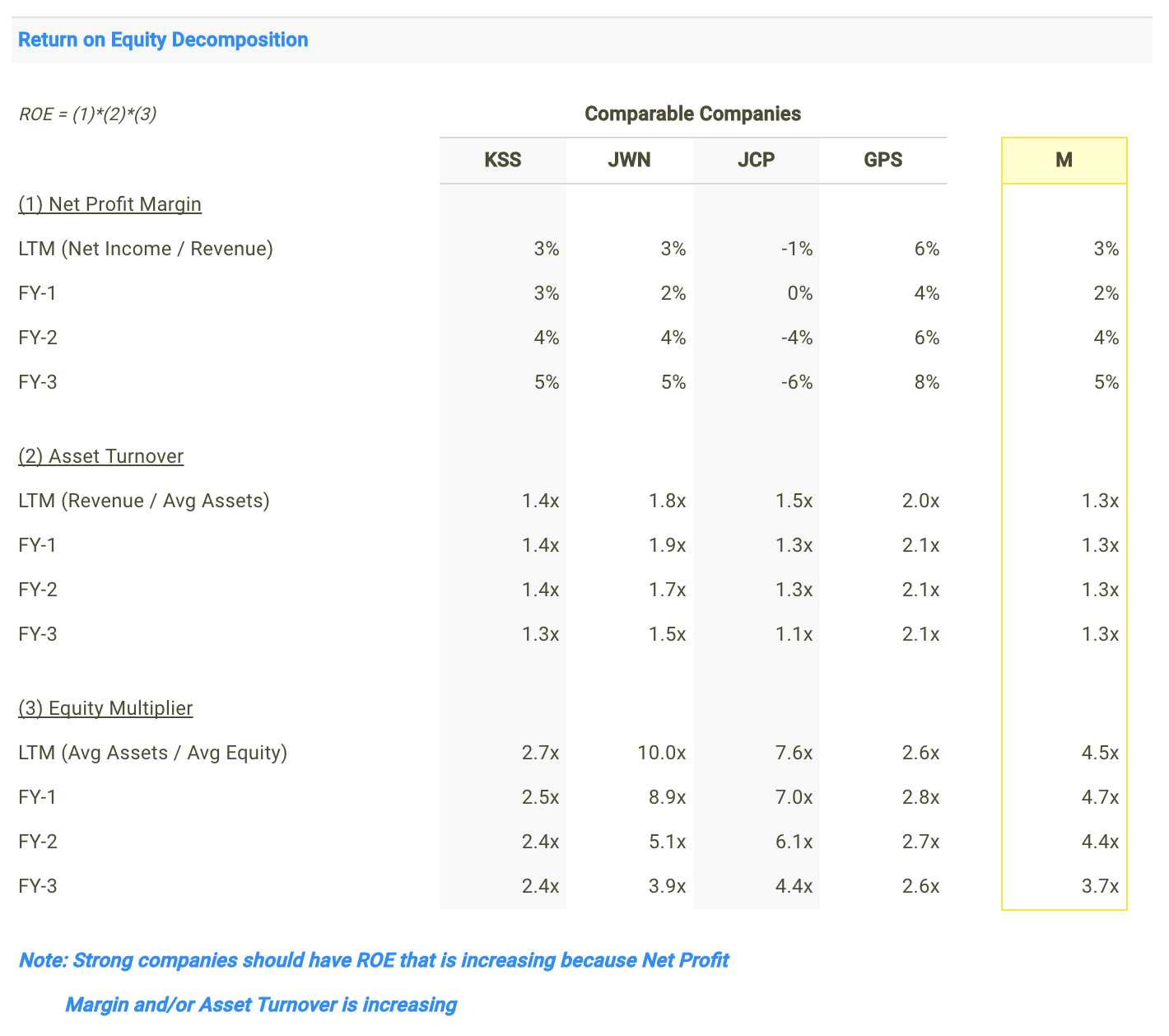 As the note in the image states, you want an increasing ROE to come from an increase in the Net Profit Margin and the Asset Turnover. In the case of Macy’s, compared to its peers they are about average in terms of Net Profit Margin. Where they need to make improvements going forward is in its asset turnover. Since asset turnover can be positively affected by either increasing revenue or decreasing assets, Macy’s will attempt to improve this ratio by reducing its assets. The method of reducing assets has been a combination of buying back shares, increasing dividends, and closing 100 retail locations. In this way, they will reduce assets and become a leaner competitor, better able to adapt to the current conditions in the retail environment.

What is a concern is that Macy’s is trailing Nordstrom (NYSE: JWN) in the asset turnover category. As a general rule, a company with a more premium priced product should have a lower turnover than its competitor with a less premium product. For this reason, Macy’s which sells products at a lower price than Nordstrom should have a higher turnover ratio.

As a value investor, it is imperative to compare the price you are paying to other similar products to get an idea if you are getting good value. As Warren Buffet says “price is what you pay, value is what you get.” Macy’s compares well to its peers and its sector in regards to price to sales, price to earnings, and price to book. They are selling for less per dollar of each when compared to their peers and their sector. 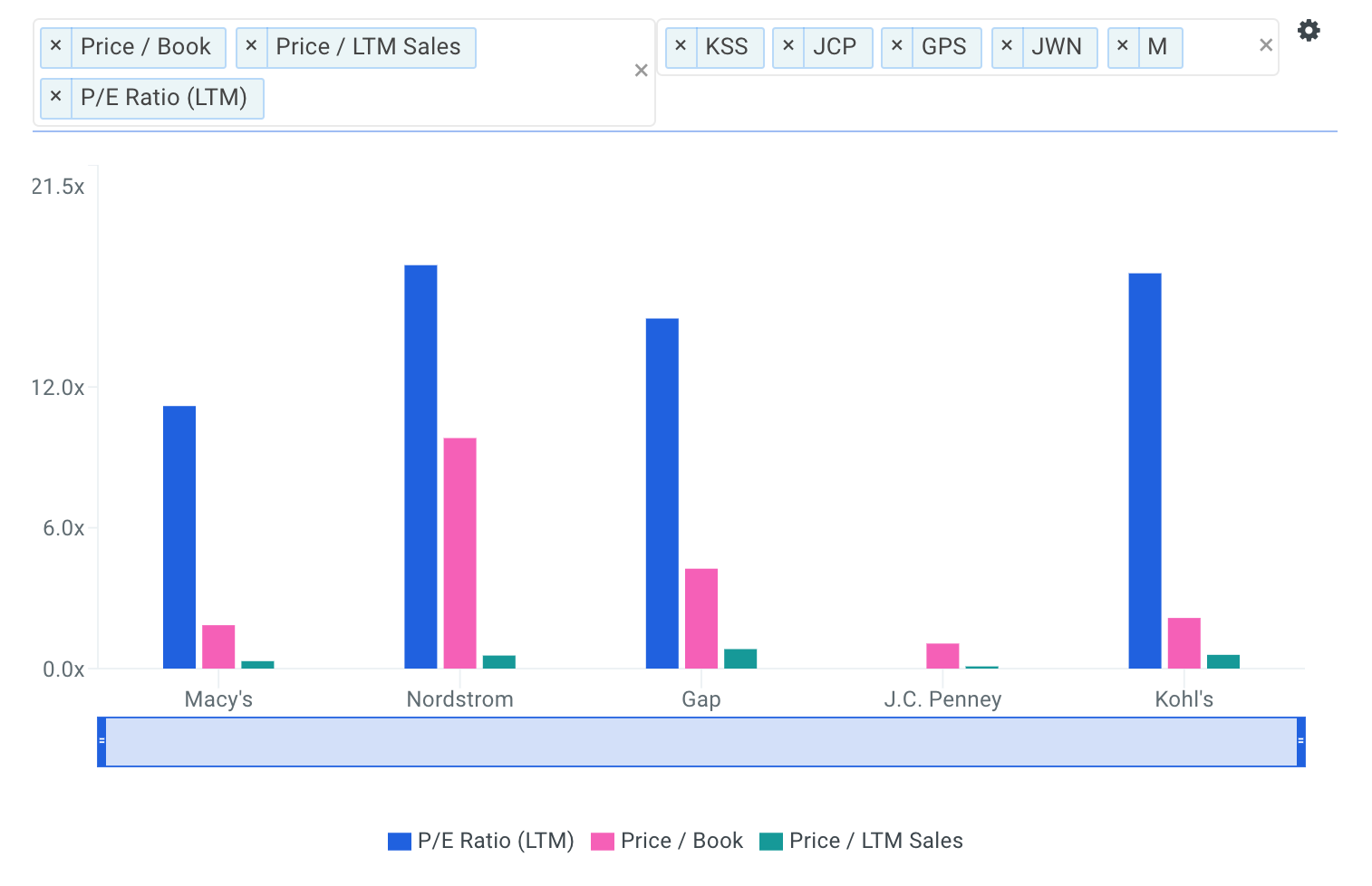 You are getting good value for the price you are paying for each dollar of earnings, sales, and book value. Although as a counter to that argument, it is known that investors pay a premium for growth. Since Macy’s has been suffering declining top-line revenues for the last few years, this discount to peers may be justified based on the negative growth. 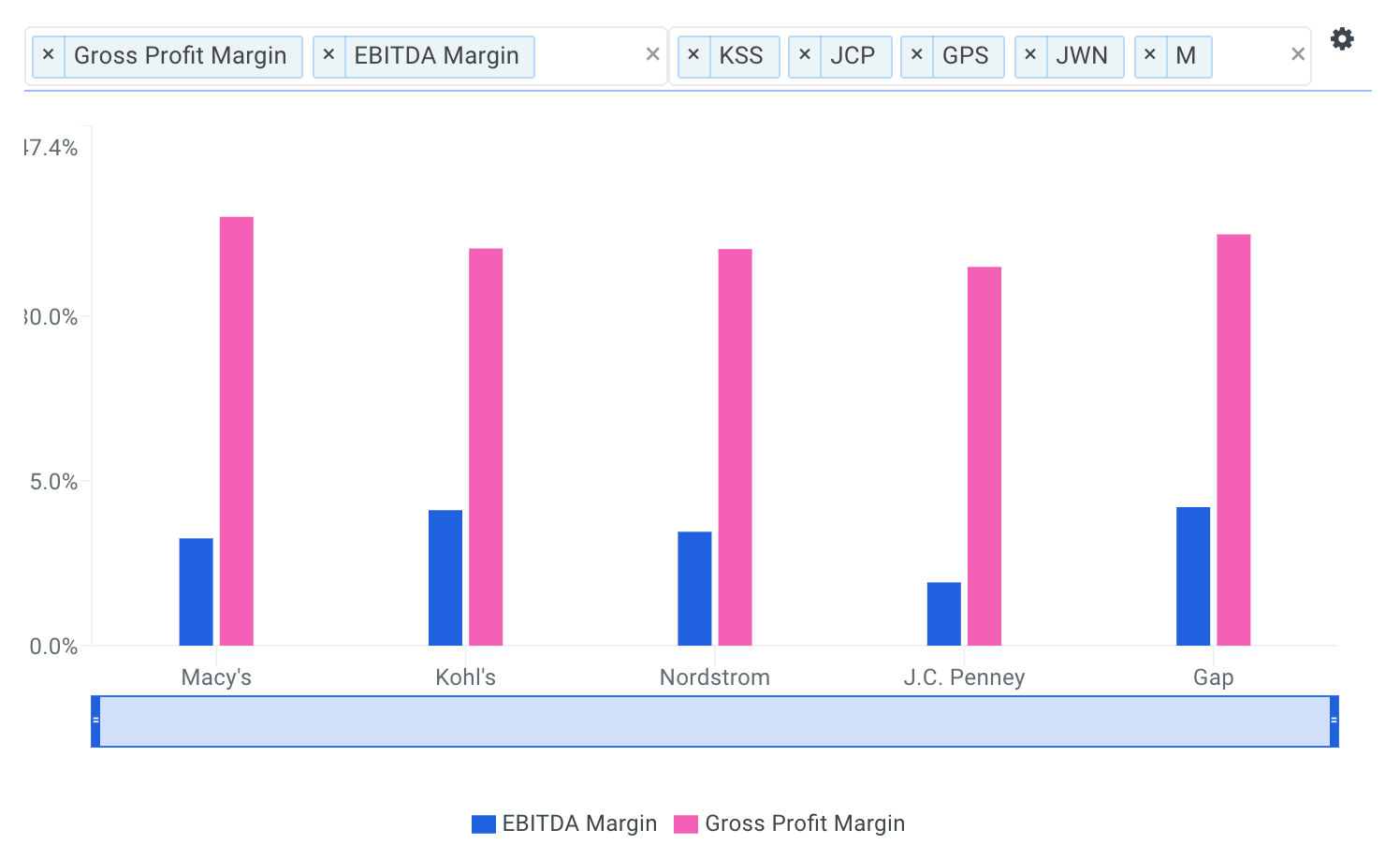 Macy’s profitability is solid among its peers and its sector. Finding a way to survive and maintain margins in this sector has been something that has not been an easy task, just ask J.C Penny (NYSE: JCP).

The fact that margins have been solid is a strong sign for investors going forward. They are not choosing to compete with Amazon in a race to the bottom while eliminating profitability. Rather they are competing by becoming leaner, investing in their own mobile shopping experience, and delivering better value to their shoppers. They have chosen a battle they can win, because no one at this point can beat Amazon to the bottom. Investors in Amazon do not expect to see any profits. Therefore, Amazon can continue lowering prices to drive sales without concern about profitability because their investors will not abandon the stock if they don’t deliver profits. It would be foolish for Macy’s to compete with Amazon on that basis.

“Our primary focus in 2017 has been to continue the strong growth of digital and mobile, stabilize our brick & mortar business and set the foundation for future growth. We’ve made good progress on each, including encouraging trend improvements in our brick & mortar business. A healthy store base combined with robust digital capabilities is Macy’s recipe for success. Looking ahead to 2018, we are focused on continuous improvement and will take the necessary steps to move faster, execute more effectively and allocate resources to invest in growth.”

It should be refreshing for investors that the decline in top-line sales revenues stopped dead in its tracks here in the holiday shopping season. Once again, the CEO makes reference to the combination of a healthy store base and robust digital capabilities. In my opinion, management gets it. They know to compete in today’s environment you need a strong mobile presence. They are backing this up with their actions. The store closures and reinvestment of the proceeds into strengthening their mobile presence is evidence of that.

With the stop in declining sales, management’s commitment to becoming leaner, and the positive impact of tax reform, Macy’s looks strong going into 2018. The retailer’s strong fundamentals combined with its discounted valuation multiples relative to peers is evidence of a company that appears undervalued.

The risks are in execution of the plan that management is aiming for, minimum wage legislation across the country and the continuing encroachment of Amazon. It will be interesting to see if the company is able to meet its expectations when management reports earnings at the end of the month (February 27th).