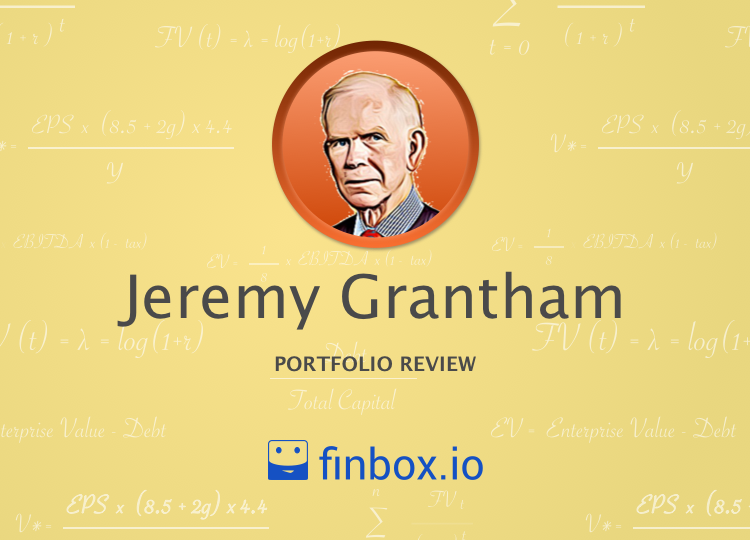 Here's what Jeremy Grantham's buying and selling as stock markets continue to rise and the firm's stock holdings underperform.

Jeremy Grantham is the co-founder and chief investment strategist of Grantham, Mayo, & van Otterloo, more commonly known as GMO. He is best known for his quarterly newsletters and for popularizing the ‘reversion to the mean’ concept in investing. He has also predicted key turning points in market indices and was listed by Bloomberg Magazine as one of the 50 most influential people in global finance.

Grantham, who is British, began his career as an economist at Royal Dutch Shell. He later worked at Batterymarch Financial Management where he started one of the world’s first passive investment funds in the early 1970s.

In 1977 he founded GMO, which is based in Boston, with Richard Mayo and Eyk Van Otterloo. The firm’s funds invest in global equities and bonds, including emerging market assets. GMO does not disclose its assets under management, but the firm was reported to have managed over $124 billion in 2014.

Grantham has gained a wide following as a result of his insightful quarterly newsletters he sends to clients. The newsletters, which invariably find their way into the public domain, are full of investment wisdom, timely calls and have even been written in the voice of Shakespearean characters.

Grantham is an environmental advocate and started the Grantham Foundation for the Protection of the Environment in 1997. He has been a very vocal opponent of the Keystone Pipeline, and believes the world should not be investing in more fossil fuel infrastructure.

Reversion to the Mean

Mean reversion, as employed by GMO, is similar to value investing. The difference is that where conventional value investors use company specific fundamental data to assess valuations, GMO uses history as a guide.

Grantham and the GMO team spend a lot of time analysing stock market valuations and bubbles throughout history. They use long term valuation trends to calculate what they believe to be the fair value for an asset. They then invest in assets that have moved a long way below fair value.

Grantham believes strongly that history repeats itself and that every bubble eventually bursts. He used his knowledge of bubbles to predict the dotcom bubble in 2000 and the housing bubble in 2007. He also managed to get his clients out of Japanese equities when they peaked in the late 1980s.

He avoids leverage because as he says, “Leverage reduces the investor’s critical asset: patience.” If investors use leverage, they cannot afford to ride out periods of weakness. He also uses diversification to reduce risk. He knows that bets can go against one, and diversification spreads the risk. GMO diversifies across global equity and bond markets.

The nature of Grantham’s approach is that GMO tends to underperform during bull markets and then outperform when markets correct. Unsurprisingly, over the past few years the firm’s funds have underperformed many of their peers. As a result the firm’s clients have reportedly withdrawn $40 billion since 2014.

Grantham also believes that to really capitalize on their patience, investors occasionally need to be brave. In March 2009, the same month the current bull market began, he sent out a newsletter entitled “Reinvesting When Terrified.” The newsletter explained why the market was offering one of the best buying opportunities in history and it was time for investors to step up - a call that may have been his best to date.

However, Grantham may find himself terrified again as this bull market shows no signs of slowing.

GMO's stock portfolio totals nearly $16.1 billion according to the latest filing. The list value of stock holdings is down -11.6% when compared to the last quarter. As a benchmark, the S&P 500 was up 3.9% over the same period.

Quarter-over-Quarter Turnover (QoQ Turnover) measures the level of trading activity in a portfolio. GMO's QoQ Turnover for the latest quarter was 21.0%, so the firm appears to trade a significant percent of its portfolio each quarter.

The Ideas section of finbox.io tracks top investors and trending investment themes. You can get the latest data on the holdings discussed below at the Jeremy Grantham page. The following table summarizes his firm's largest holdings reported in the last filing:

The seven positions above represent 26.2% of the hedge fund's total portfolio.

Managers with more than $100 million in qualifying assets under management are required to disclose their holdings to the SEC each quarter via 13F filings. Qualifying assets include long positions in U.S. equities and ADRs, call/put options, and convertible debt securities. Shorts, cash positions, foreign investments and other assets are not included. It is important to note that these filings are due 45 days after the quarter end date. Therefore, GMO's holdings above represent positions held as of September 30th and not necessarily reflective of the fund's current stock holdings.