Is IBM A Value Trap?

On its face, International Business Machines (NYSE: IBM) looks very attractive to value investors. The stock trades near its 52-week low after falling 20% since February and currently boasts a 4% dividend yield. IBM also trades at a 10% discount to its finbox.io intrinsic value estimate which is calculated from twelve separate valuation analyses.

The term that is being thrown around with increasing frequency is value trap. A value trap refers to a stock that has fallen out of favor and looks cheap because it trades at a low valuation but ultimately fails to recover. Value traps are often shares that have performed very well in the past, and then after an extended period of price weakness appear to be cheap.

IBM is an obvious candidate to be labeled a value trap. But is it? And, what are the signs investors should look for to confirm that it either is or isn’t a value trap?

Warren Buffet recently sold a third of his IBM stake, and many investors have pointed to this as proof that the company cannot justify its current valuation.

Convincing arguments can be made for and against IBM.

The company is in the process of reinventing itself, something it has done repeatedly over its 106-year history. The company has always moved toward higher value services and is doing so once again. They are divesting all of the least profitable legacy businesses, and investing in the cloud and AI businesses.

While the cloud and cognitive computing businesses are very competitive, IBM has a very strong presence in the enterprise services space, something its competitors lack. The company should be able to leverage its current client base to grow these segments faster than its competitors can.

Warren Buffet sold part of his IBM stake because he can’t quantify the risk going forward and he is a risk averse investor. That doesn’t mean the company won’t return to the levels of profitability it has enjoyed in the past.

A blue-chip stock trading at a P/E multiple of 10.2x and a dividend yield of 4% certainly looks like a good buy.

The P/E and forward P/E ratios are both low relative to IBM’s peers: Hewlett Packard (NYSE:HPE), HP Inc. (NYSE:HPQ), Apple (NasdaqGS:AAPL), Accenture plc (NYSE:ACN) and Microsoft (NasdaqGS:MSFT). However, it is important to note that these businesses all have different operating models so a comparison like this is somewhat limited. 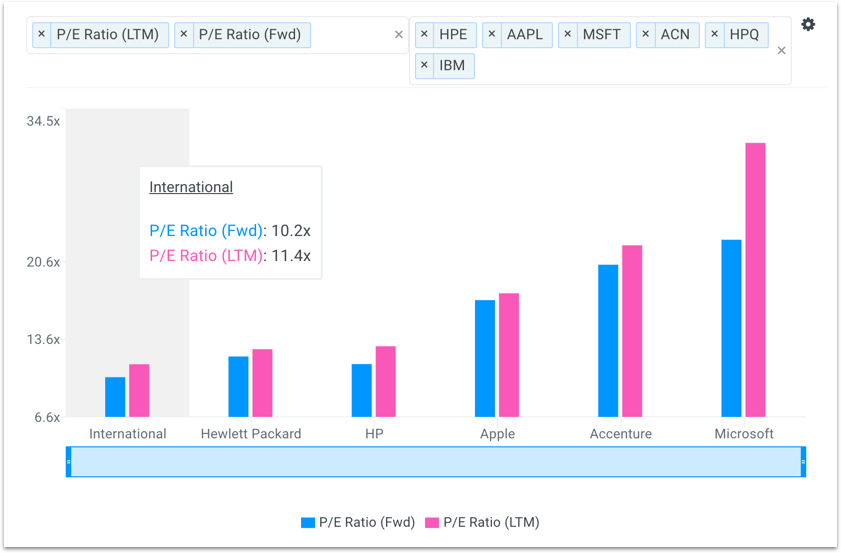 Shares of IBM trade around $140 which is a very reasonable price, specifically if the company can return to growth.

The margins in the cloud business are not what they were 5 years ago. The legacy business will contribute less and less while Google (NasdaqGS: GOOG) will beat IBM in the artificial intelligence business. 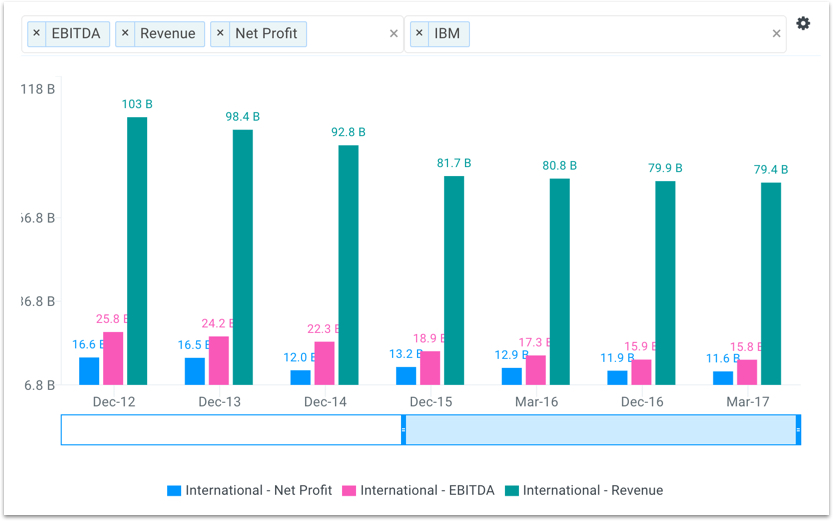 Management has been talking about a turnaround for years, but really the company is in a terminal decline. So, the real question is what are the chances that IBM is able to stop its terminal decline and when?

When Will The Terminal Decline Stop?

The twelve finbox.io models used to value IBM have a wide range of fair values. However, the majority of the models calculate an intrinsic value estimate greater than $150 per share. Additionally, the majority of the valuation models apply consensus Wall Street projections. The current revenue forecast is illustrated below.

Notice how Wall Street expects that IBM’s revenues will finally show signs of growth by fiscal year 2020. Furthermore, if you believe the above forecast and that IBM stops its terminal decline in 2020, then you would likely be a buyer of IBM’s stock at its current price. However, the market obviously doesn’t believe Wall Street’s forecast as the stock trades below its intrinsic value calculated from the future cash flow models.

It all comes down to IBM’s growth over the next few years which is highly dependent on whether the company’s new strategic imperatives gain traction or not. Right now, there is nothing in the numbers to suggest they will but that doesn’t mean they won’t.

If IBM can show evidence of these segments gaining traction at least once over the next ten quarters, expect shares to reach well above the current $140 level. One would think that should be enough time, but with IBM it's a risky call.

Note this is not a buy or sell recommendation on any company mentioned.
Photo Credit: Contrarian Edge