Huntsman International: A Catalyst for 25%+ Appreciation

Timing this economy has the market on edge. With inflation nearing the Fed's 2% target, investors seemed relieved that the FOMC decided to hold off on hiking rates. In the ninth year of the 2nd longest expansion in U.S. history, it is surprising to hear the phrase "Goldilocks economy" in the news. Perhaps fitting, the old children's story tells of a little girl trying to profit before the bears come back home. During her breaking and entering, she finds three bowls of porridge, one too hot, one too cold, and one just right. With inflation growing at a moderate pace while unemployment dips under 4%, economists see the economy as not too hot and not too cold.

The Federal Reserve has dual mandates: keeping unemployment and inflation low. Unemployment recently fell to 3.9%, the lowest level since April 2000. The Fed has indicated that they see a long-run unemployment rate of 4.5% as healthy.

The Fed also aims for inflation of 2%. Most look to CPI as the benchmark, but the Fed typically watches the change in Personal Consumer Expenditures ex. Food and Energy. For reference, the Consumer Price index in March was 2.35% overall and 2.11% excluding food and energy (red line).

PCE readings were more muted, coming in at 2.01% overall, and at 1.88% for the less volatile PCE ex. Food and Energy (blue line). Both measures show inflation has been meandering rather than rising consistently. However, trying to time a recession (shaded areas) based on inflation looks like a fool's errand in the chart below.

In an August 2003 article in the American Association of Institutional Investor's Journal, Wayne Thorp provided a framework for determining where to invest based on the economic cycle. He used four criteria for timing: inflation, interest rates, capacity, and inventory. 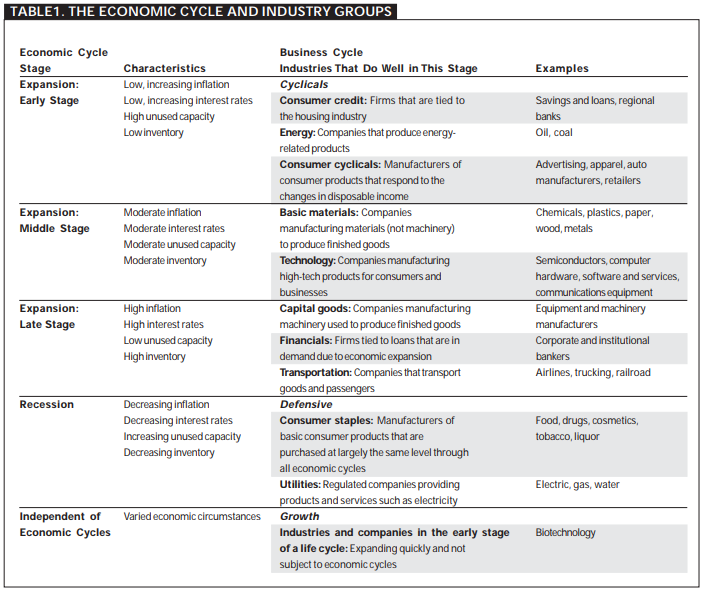 Inflation: As noted earlier, inflation is neither too hot or too cold. With the PCE benchmark somewhat close to the Fed's target, inflation can be categorized as moderate.

Interest Rates: Interest rates are relatively low across the spectrum; however, two spread measures have been helpful in pointing towards recessions. The 10-year minus 2-year Treasury spread has gone negative and then started to rise a few months ahead of the last three recessions, indicating a flattening and then inversion of the yield curve. Currently, the curve is flattening with the spread at 49 basis points.

Another measure relative to the market's risk-free proxy is shown below with corporate bonds. A rise in this spread indicates that corporates are seen as riskier as the economy falters. The spread has been trending down, but recently bounced 15 basis points from a Feb low to March's 1.8% points. Rates remain in a moderate zone.

Capacity: Total Industry Capacity Utilization, the percentage of resources used by corporations and factories to produce goods in manufacturing, mining, and electric and gas utilities for all facilities located in the United States, had a reading of 78% in March, lower than any pre-recessionary print for the past seven recessions. Utilization is low.

The Industrial Production Index can be used in conjunction with capacity for better timing. A peak in production has been concurrent with the start of almost every recession since the 1920's.

Inventories: Reversals in inventories have called a lot of false recessions. Since the 1990's, a peak year-over-year change of near 10% has preceded recessions. Q1's reading of 4.1% is fairly tame. In fact, almost all of these charts show that a slowdown starting around 2015 eased the pressure building up during this long expansion. Inventories fall into the low-moderate zone.

With moderate readings across Thorp's criteria, the economy appears to still be in the middle stage of the expansion. He recommends investments in Basic Materials and Technology. Interestingly, finbox.io's screener shows that Wall Street analysts see the average upside for Materials stocks at 16.7%, nearly 400 basis points better than Technology.

Huntsman is a diversified chemical producer with four main segments. 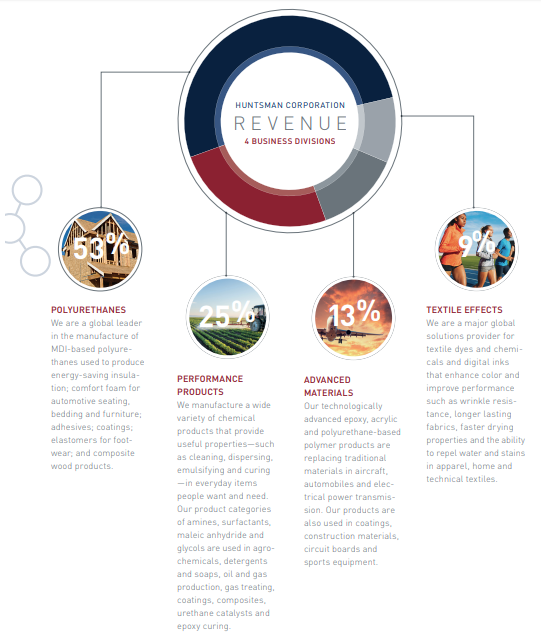 Polyurethanes make up more than 50% of sales, but the end uses across all products are highly diversified with insulation as the top share at only 17%. Huntsman's products are generally industrial, but it also saw 32% of sales from the consumer market in 2017. 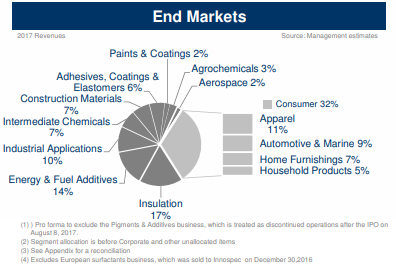 In addition to product diversity, Huntsman enjoys regional diversity. One-third of sales are in North America (ex. Mexico), 26.1% in Europe, and 25.8% in Asia Pacific.

The company reported a 20% earnings surprise on May 1. This was the fourth double-digit surprise in a row, a sign that the executive team has a good handle on the business and is managing expectations well with analysts.

All segments were up year-over-year in Q1, and most saw price and volume increases, pointing to a strong downstream environment.

Estimates across time have been increasing since the earnings call, and all recommendations suggest investors buy the stock. 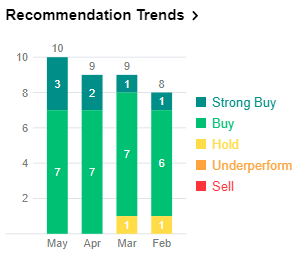 The company has $1.25 billion of dry powder in credit facilities and cash and has been reducing its debt load. Both its Debt/Equity and Cash Flow/Total Debt are the best among its peers. Management has left itself in position to continue to make beneficial acquisitions, as it did earlier this year in polyurethane with spray foam producer Demilec. 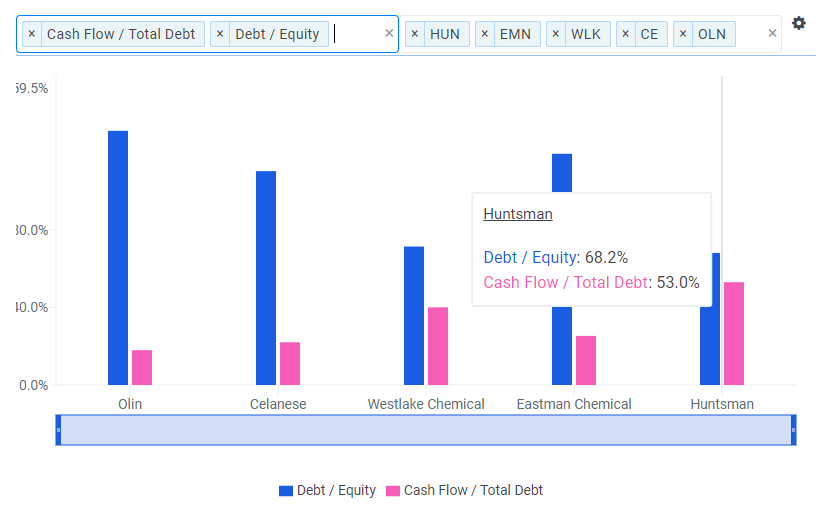 The stock currently yields 2.1%, and Huntsman is also one third through its $347 million repurchase authorization. Its Dividend and Interest Coverage ratios are strong. 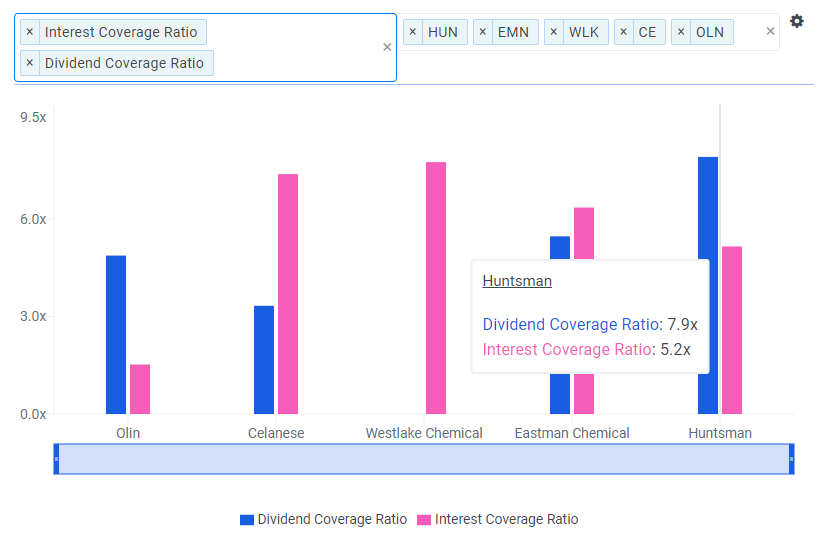 Efficiency margins show that Huntsman's management team is performing well. ROE and Return on Invested Capital top their peers and the sector. ROA and Net Profit Margin are strong but have room for improvement as they sit below peer averages. 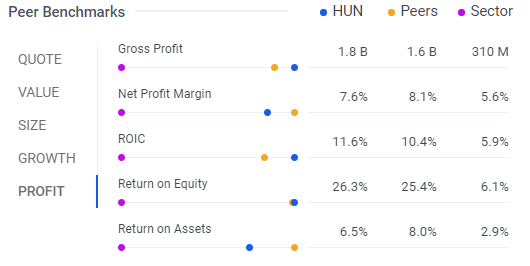 A closer look at margins shows a positive trend in EBITDA, but the higher slope in Net Profit margins is probably thanks to accounting noise. 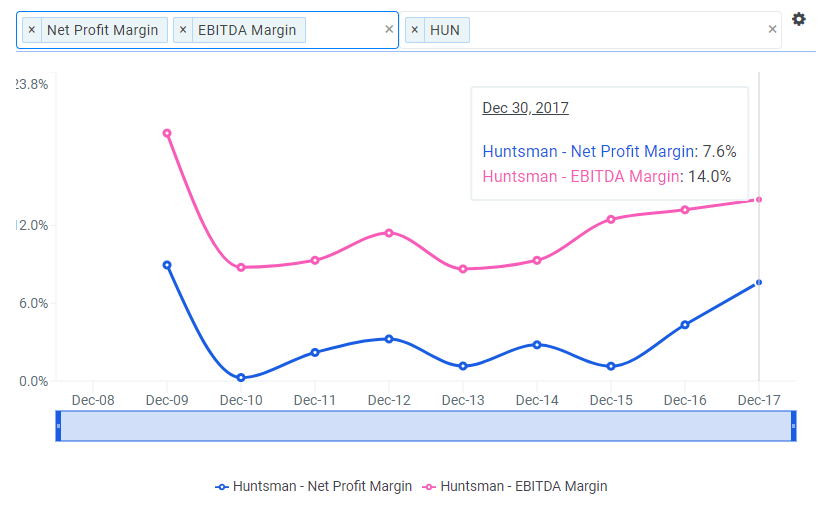 Assuming that this expansion has more legs, Huntsman is in position to continue to enjoy growth in the U.S. However, in the case that a recession is closer than expected, the firm has a conservative fiscal footing that would help weather a downturn. Its customer and geographic diversity will also help to dampen any weakness in the U.S., and aid profits while the global economy is strong. 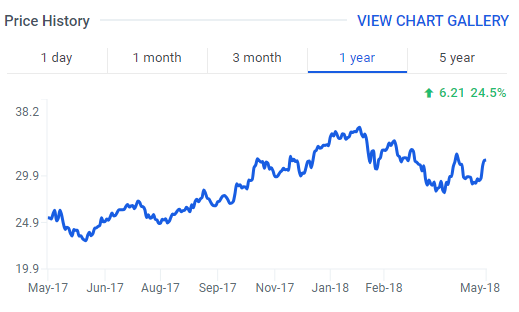 Huntsman's stock has had a strong showing over the last year, rising 24.5%. It is very levered to market performance, sporting a beta of 3.12, more than double its peers and sector. This is a risk-on investment. Huntsman's trailing P/E (pink bars) is about average in its peer group. However, its Forward P/E shows the company as relatively undervalued. 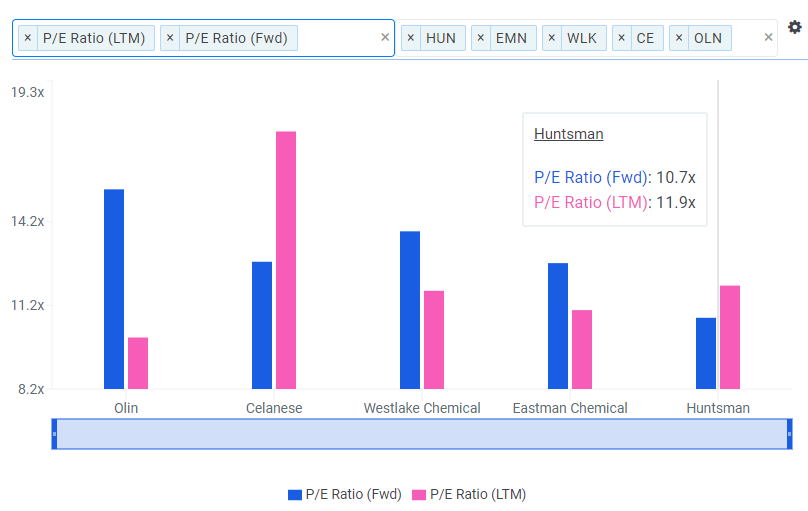 Since earnings can be managed, a top-line comparison is typically enlightening. Huntsman has the second lowest Price/Sales ratios of the peer group, far outdistancing the other three competitors. 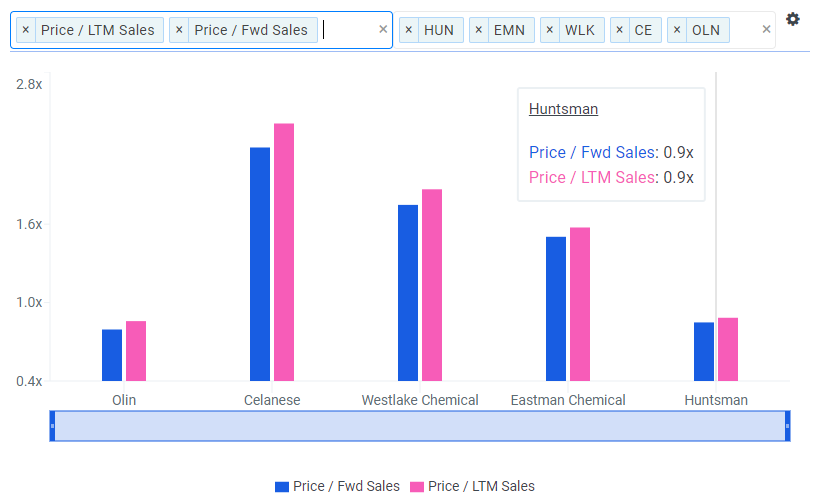 However, the most honest multiple relies on free cash flow, the amount of actual cash left over for investors after funding continuing operations. The numerator, Enterprise Value, factors in market cap, debt, and cash as a proxy for what it would cost to buy the company outright. Huntsman's EV/FCF multiple is the lowest of its group. Also included is an earnings measure to show how earnings multiples tend to show more subdued valuations. Regardless, these measures show Huntsman as undervalued. 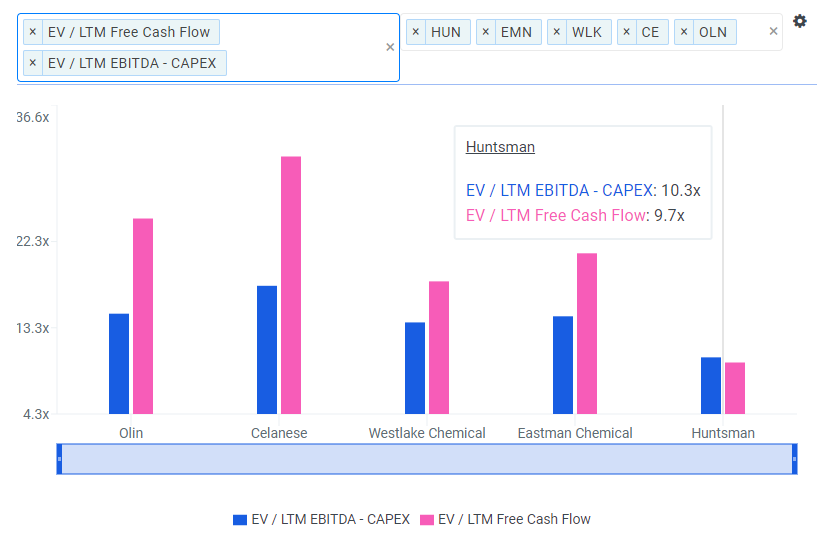 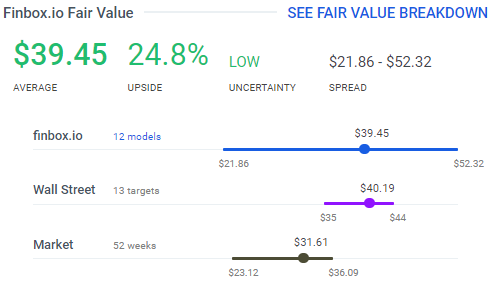 Weakness in 2015 looks to have given this nine-year expansion a second-wind. Traditional measures of expansion point more to mid than late cycle. During the middle stage of an expansion, Basic Material companies are recommended, and Huntsman looks attractive with its high beta, low multiples, and positive quant and Wall Street expectations.