When investors talk social networking sites, they want to know about MAU. Monthly Active Users or MAU is a key metric used to analyze social networking companies. Investors often apply MAU instead of Daily Active Users (DAU) for comparison purposes because more companies typically report MAU. Facebook, Inc. (NASDAQ: FB) boasts 2.1 billion MAU which grew by 269 million in FY 2017. As illustrated in the chart below, 90% of that growth came from Asia-Pacific and Rest of World Regions. 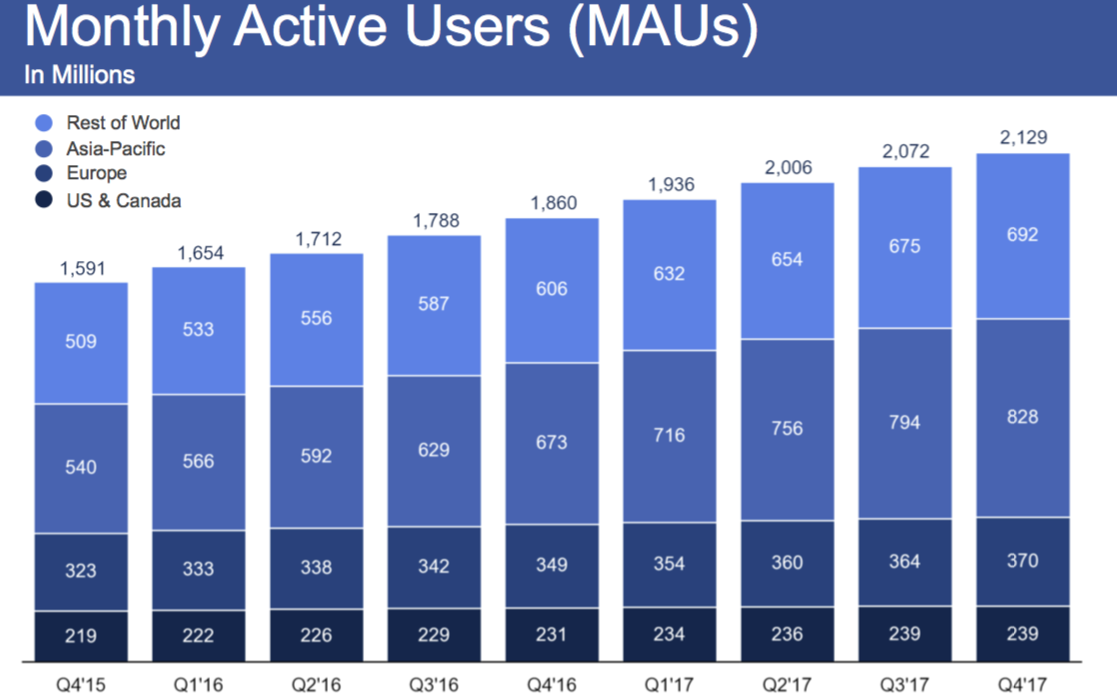 The numbers above are impressive. Facebook calls 28% of the world’s population Monthly Active Users. The comparison with other social networking sites makes those numbers stand out further. In addition, Facebook owns WhatsApp, Instagram, and Messenger which post substantial MAU figures as well. As the chart below shows, Facebook and its subsidiaries hold 4 out of the top 7 spots in terms of MAU. 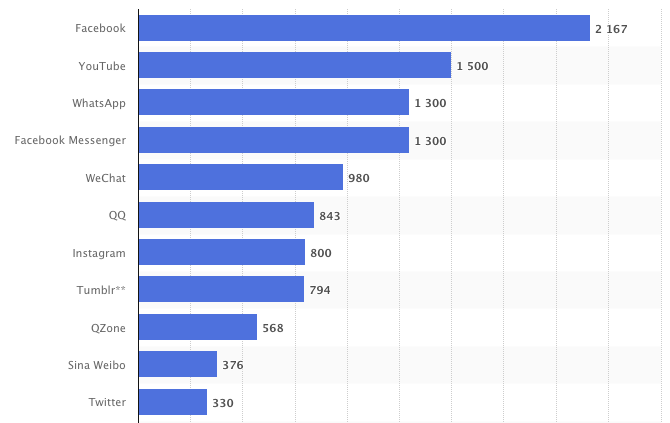 Now that we know how many users Facebook has, it’s time to find out how much revenue each user generates. According to the numbers from Q4 2017, the Average Revenue Per User from the US and Canada region was $26.76, up 35% from prior year. While the next highest, is from Europe at $8.86, up 48% YoY. The Asia-Pacific region posted $2.54 which was up 23%. 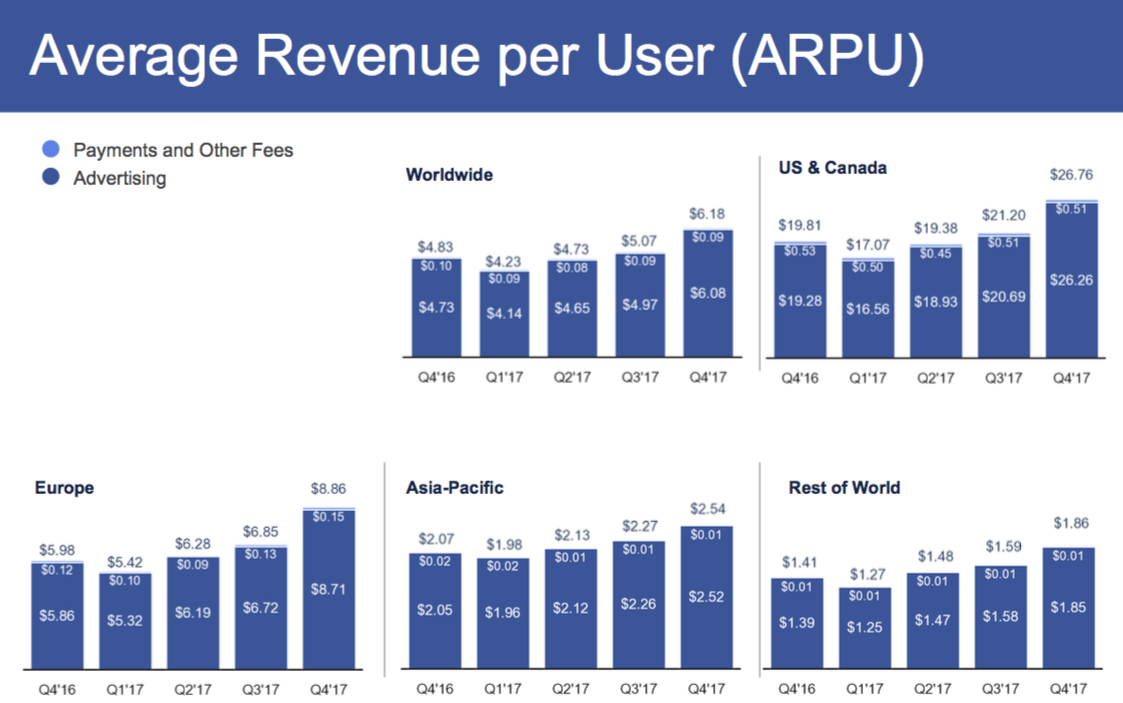 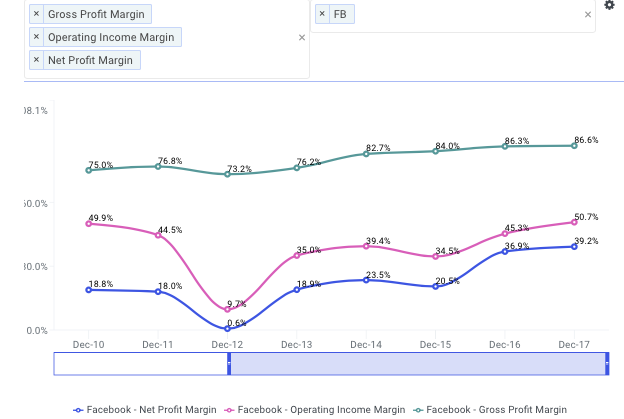 Facebook achieved revenues of $40 Billion in FY 2017, a 47% increase compared to FY 2016. In Q4, total ad revenue reached $13 billion up 44% YoY. The big driver in sales was an increase in the average price per ad, which was up 43% in Q4 from prior year while ad impressions were only up by 4%. By limiting the amount of available ad impressions, Facebook was able to earn higher prices per each individual ad. In addition, the company develops tools to help businesses target specific customers. These targeting and re-targeting tools help increase the conversion rates for ad impressions and demands a premium from marketers who wish to employ it. 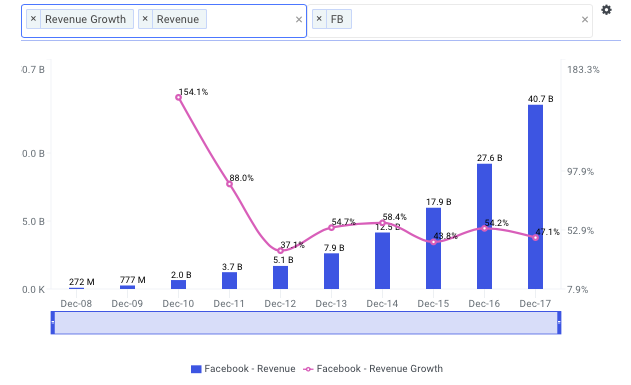 As the market becomes saturated, Facebook’s top-line growth rate is projected to decline. However, Wall Street analysts still expect sales to grow at no less than 15% for the next five years. Management has confirmed they expect growth to decelerate but have not given specific numbers. According to the Wall Street’s forecast, Facebook will hit $100 billion in revenues in the FY 2021. 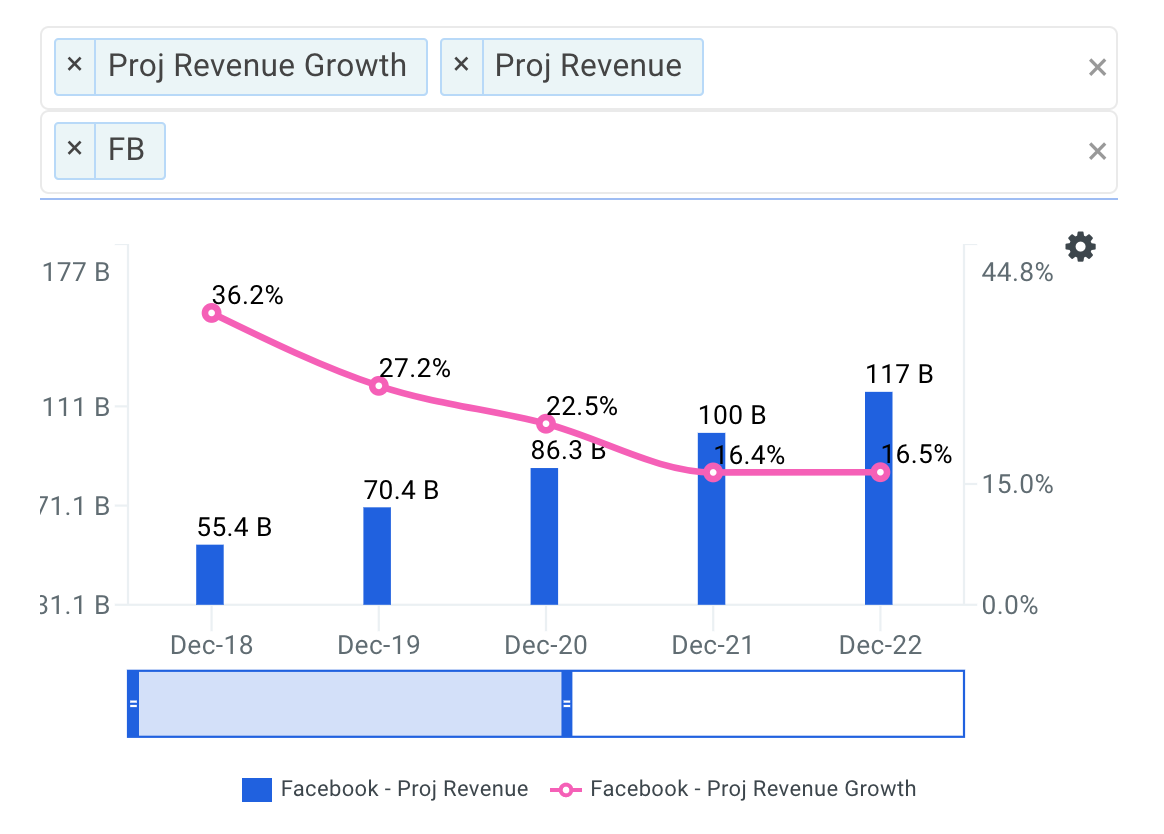 Facebook announced in its most recent conference call that Capital Expenditure will be between $14-$15 billion for FY 2018. This would more than double the roughly $7 billion in CapEx for FY 2017. The increase will be driven by investments in data centers, servers, office facilities, and network infrastructure. However, this could be seen as a bullish sign for investors considering Facebook’s cash return on invested capital is above 20%. 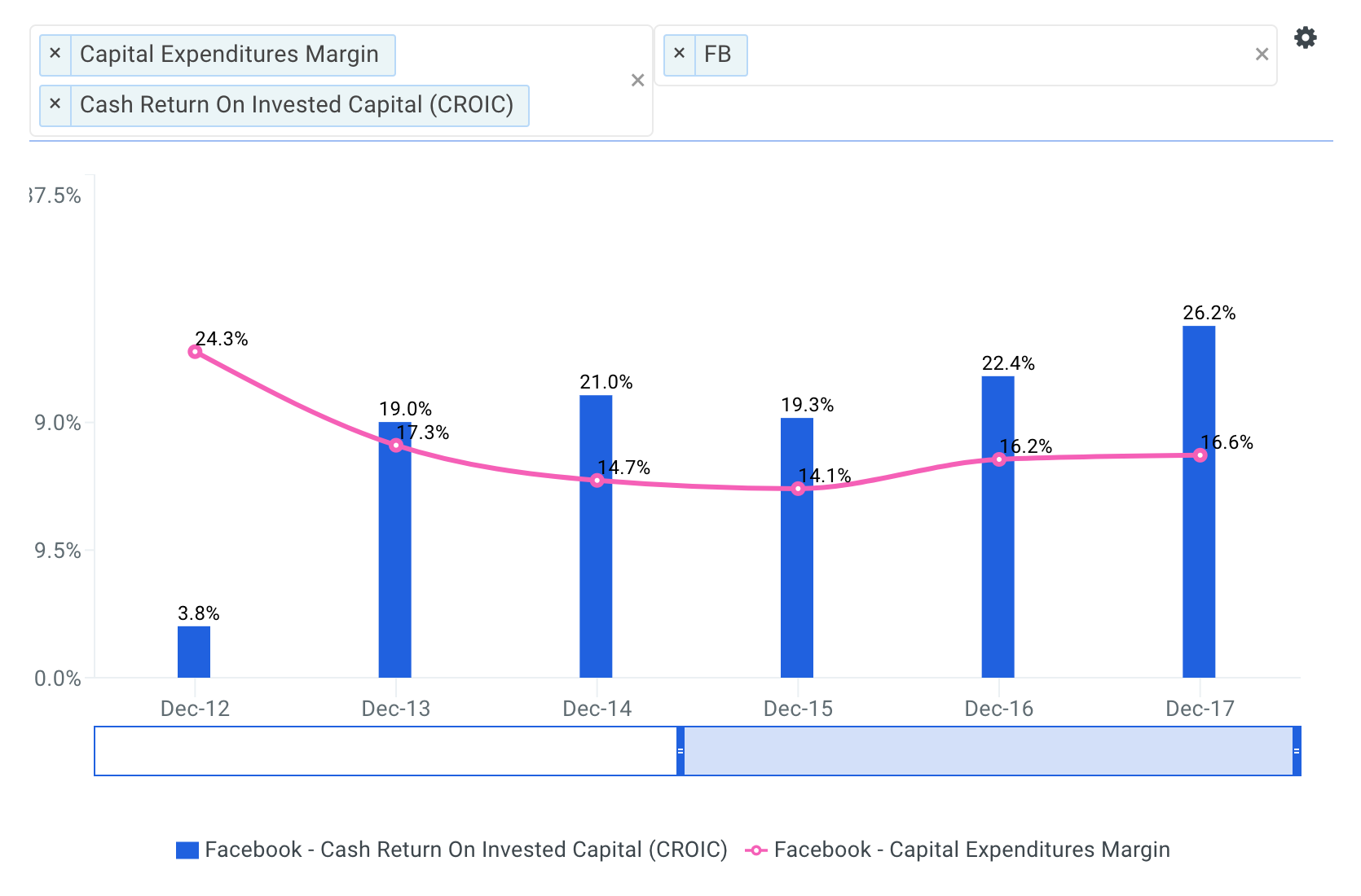 The world population was 7.5 billion as of 2017. Asia claims 60% of the world’s population, and Facebook only has 18% of that number registered as MAU, providing a major opportunity for further growth. The highest percentage of growth in population is projected to come from Africa. According to The Guardian,

“Africa is home to over 1.2 billion people, but only 226 million smartphones were connected to the internet by the end of 2015. That number connected is expected to triple by 2020.”
Facebook saw this opportunity and has initiated connectivity projects to increase the number of individuals connected to the internet. In North America, Facebook counts 66% of the population as MAU. Population forecasts predict growth in the North American region by 34 million through 2030. In Europe, Facebook counts 50% of the 742 million individuals as MAU. If Facebook achieves the same 66% share in Europe as it has in North America, that would be an additional 118 million MAU.

Facebook has some intriguing prospects that are coming to fruition. During the latest conference call Mark Zuckerberg said “on the VR side were excited to get Oculus GO into people’s hands this year. Time magazine named it one of the top inventions in 2017, and I can’t wait for more people to use it.” Though it may be a small part of the business to begin with, such a product has potential to change the game. Facebook is also investing heavily on long-term initiatives in Augmented Reality, Virtual Reality, Artificial Intelligence and Connectivity. A few of these initiatives have started bearing fruit while others may take more time to develop. With these investments, Facebook hopes to improve products and services it already offers as well as develop new and completely separate products and services.

Applying the consensus Wall Street expectations in seven separate valuation models, finbox.io calculates an intrinsic value of $188.75 per share. This implies that Facebook’s stock is currently undervalued by 5.8%.

Facebook faces a multitude of risks moving forward. To start, nearly all of Facebook’s revenues come from selling advertising to businesses. That concentration of revenues poses a risk for investors. Social network users are not necessarily a sticky bunch. Do you remember Myspace? A mass exodus of users is not entirely unrealistic. In addition, the recent negative publicity surrounding Facebook’s role during the 2016 U.S. presidential elections has brought unwanted attention from regulators in the United States. Any action taken by regulators poses a risk to the business.

However, Facebook has reached a critical mass and is still growing its user base. They have opportunities to expand services to existing populations and potential to grow simply through population growth. In addition, they have optimized their two-pronged approach to revenue growth: (1) growing the number of MAU and (2) monetizing those users with a growing average revenue per user.

Long-term investors may want to take a closer look at owning shares of Facebook even after the stocks +500% appreciation over the last five years. Six notable hedge funds purchased the stock in Q4'17 offering further support.