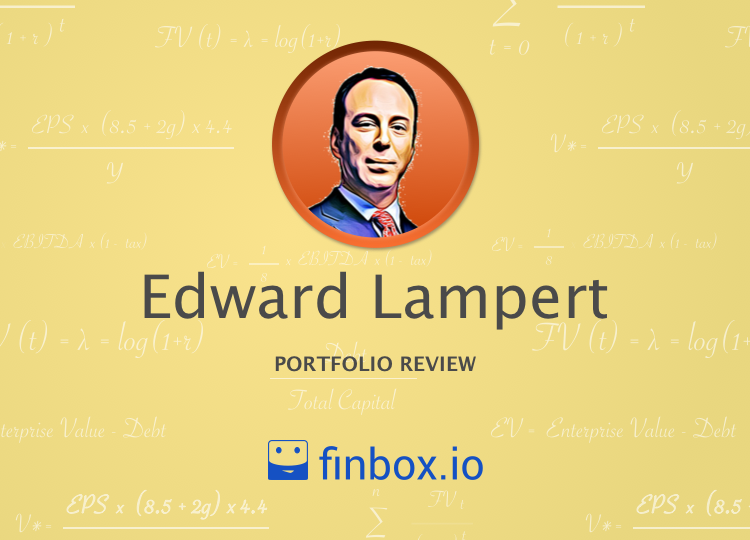 Edward Lampert is the founder and chairman of ESL investments which manages RBS Partners, a hedge fund that invests in public equities. He is also CEO and chairman of Sears Holdings (NasdaqGS: SHLD), owner of Sears and Kmart. He is known as a contrarian investor and an ardent follower of Warren Buffett.

After graduating from Yale in 1984, Lampert started his career at Goldman Sachs in its risk arbitrage department along with future Treasury Secretary Robert Rubin. In 1988 he left to start ESL Investments (ESL standing for his initials) at the age of 26. The firm's initial fund was seeded with $28 million by famous energy investor, Richard Rainwater. The flagship fund, RBS partners, went on to generate an average yearly return of 29 percent between 1988 and 2012.

ESL’s clients include David Geffen, Michael Dell, and the Ziff Family. Geffen, a renowned film producer, reportedly gave Lampert $200 million to invest in 1992. He later said that if he had not made periodic withdrawals, that investment would have been worth $9 billion by 2006. He also said that he had made more investing with Lampert than in any of his own businesses.

In 2004 Lampert became the first hedge fund manager to make over $1 billion in a single year. That paycheck made him wealthier than Warren Buffet had been at the same age. However, he is now worth $1.8 billion and has seen his wealth decline due to his firm’s large investment in Sears Holdings.

Unlike most hedge funds, RBS Partners holds relatively few positions and tends to hold those positions for a long time. Lampert believes it's better to hold a small number of high conviction positions than diversify into more companies without really understanding them all. For most of 2017, RBS held positions in just three companies.

Lampert is a deep value investor. He uses rigorous analysis to find companies that are out of favor and trading at a discount to intrinsic value and then holds them until they are fully valued.

During the 1990s, when most investors were focused on internet stocks, he saw opportunities in IBM (NYSE: IBM) and American Express (NYSE: AXP) and made large bets on both. He also invests in so-called boring and obscure companies overlooked by other investors. Lampert made some of his best returns from The Deluxe Corporation (NYSE: DLX) and car parts retailer Autozone (NYSE: AZO).

In 2004 Lampert, through RBS Partners, bought the debt of Kmart when it filed for bankruptcy protection. As part of a debt restructuring, he was able to acquire a controlling stake in Kmart. After becoming the chairman of Kmart, Lampert was dubbed “the next Warren Buffet.”

As chairman of Kmart, Lampert orchestrated a buyout of Sears for $11 billion. He then restructured both companies by closing underperforming stores and cutting inventory costs. However, the combined companies have struggled against competition from Walmart (NYSE: WMT), Amazon (NasdaqGS: AMZN) and other retailers.

In 2013 Lampert took over as CEO of Sears, but the company has struggled to remain a going concern. Sears’s share price has fallen from over $80 to below $3.50 in the last two years. Lampert has been criticized for his management style at Sears. In particular, analysts believe he has micromanaged the business to generate short-term cash flow, rather than a sustainable growth strategy. Somewhat ironically, it was Warren Buffet who predicted in 2005 that Lampert would struggle to turn Sears around.

Though RBS Partner’s other holdings have performed relatively well, Sears has dominated the news and investors have abandoned the fund. At the end of 2016 the fund held assets of $653 million, down from $16.5 billion in 2007.

The hedge fund's stock portfolio totals $512 million according to the latest filing. The list value of stock holdings is down -5.9% when compared to the last quarter. As a benchmark, the S&P 500 was up 3.9% over the same period.

Quarter-over-Quarter Turnover (QoQ Turnover) measures the level of trading activity in a portfolio. RBS Partners' QoQ Turnover for the latest quarter was 3.6%, so the firm likely has high conviction in these holdings as indicated by the low turnover ratio.

The Ideas section of finbox.io tracks top investors and trending investment themes. You can get the latest data on the holdings discussed below at the Edward Lampert page. The following table summarizes his firm's largest holdings reported in the last filing:

The six positions above represent the hedge fund's total portfolio. Note that the only stock RBS Partners bought in Q3 was Lands' End (NasdaqCM: LE) adding $1.5 million worth which brought the total position to $82.7 million.

Managers with more than $100 million in qualifying assets under management are required to disclose their holdings to the SEC each quarter via 13F filings. Qualifying assets include long positions in U.S. equities and ADRs, call/put options, and convertible debt securities. Shorts, cash positions, foreign investments and other assets are not included. It is important to note that these filings are due 45 days after the quarter end date. Therefore, RBS Partners' holdings above represent positions held as of September 30th and not necessarily reflective of the fund's current stock holdings.