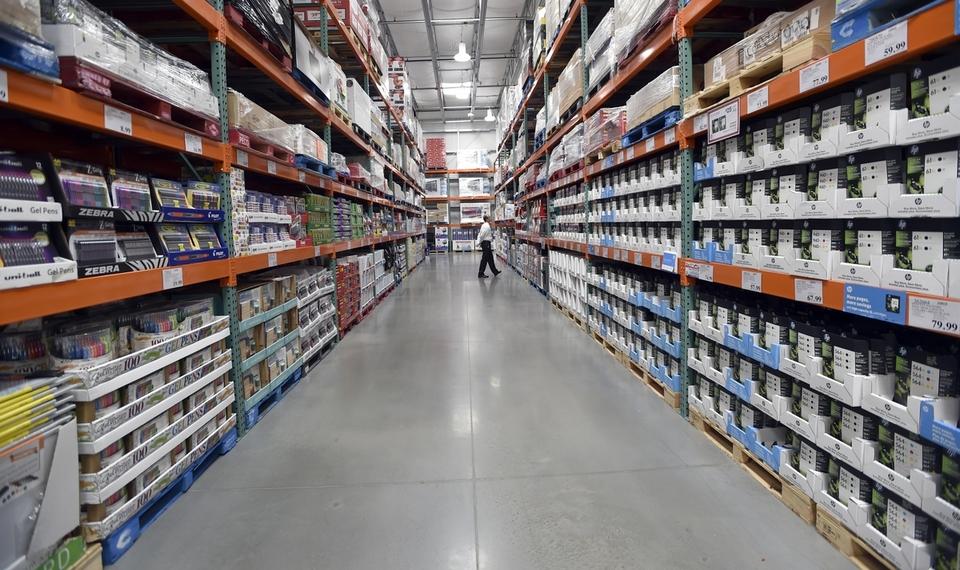 Amazon's Making It Tough To Be A Costco Shareholder

Amazon’s (NasdaqGS:AMZN) purchase of Whole Foods (NasdaqGS:WFM) has rocked the retail industry to a great extent. One casualty (of many) has been Costco (NasdaqGS:COST) whose stock price took a 7% hit after news of the acquisition broke on June 16th. Costco is in a unique position where it is actually delivering healthy comp sales but the market still does not appear convinced of the company's long-term prospects. The retailer reported mid-single digit same-store-sales growth in May and June which handily beat Wall Street's expectations. Any other retailer would be grateful for such numbers but investors remain unimpressed as the stock continues to decline.

In addition to Costco's impressive comp growth, a recent membership fee hike could add as much as $250 million in operating profit on an annualized basis. But these factors will likely continue to be overshadowed by the constant growth and disruption of Amazon. As Amazon increases its warehouse and delivery station network in the U.S. over the next few years, market sentiment towards retailers like Costco will likely only get worse. And given the high forward PE ratio of 26.5x where Costco currently trades, there is still downside momentum for the stock.

Value investors should keep their distance from Costco for the time being.

The low same-store-sales growth Costco achieved in 2016 was mostly due to overall deflationary strain in the economy. Its decision to stop selling tobacco products also negatively impacted last year's results. However, the company has made a strong comeback in the last few months.

Excluding the impact of changes in gas prices and foreign exchange the comp growth figure for the U.S. in March was 6%. Then due to the Easter holiday, growth receded to 3% in April before jumping back up to 4.5% in May and 6.5% in June. It’s important to note that these strong same-store-sales growth figures have also been helped by lighter comparisons from weak 2016 numbers.

Although Costco has delivered impressive performance, it ultimately has to face the fact that Amazon is becoming the biggest force in retail. The entry of Amazon into brick and mortar with the acquisition of Whole Foods is the greatest worry for the company. Amazon has a retailing model which is based on high penetration of its Prime membership. According to a recent research report by Consumer Intelligence Research Partners (CIRP), Amazon has more than 80 million Prime members in the U.S. which represents a whopping 64% of the total 125 million households in the U.S.

This percentage is also greater in higher income households. Last year Piper Jaffray estimated that Prime penetration in households having an annual income above $112,000 has moved beyond 70%. This number has likely further increased within the last year. Amazon can claim to have almost ubiquitous Prime membership among high-income households. 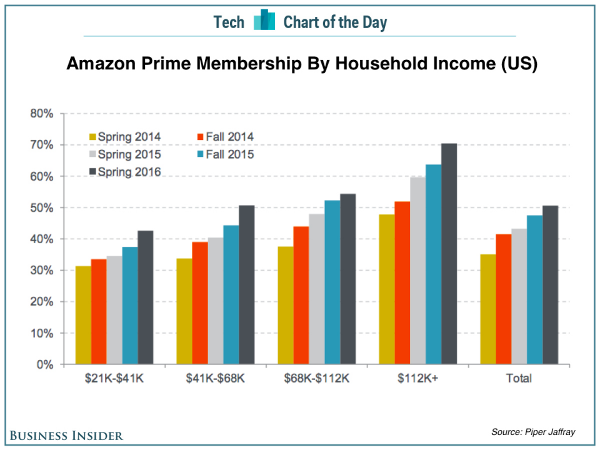 The majority of Costco’s operations and revenues are derived from North America. Out of a total of 734 stores, 606 are based in the U.S. and Canada. The company has a total of 48.6 million households who have a Costco membership. It's safe to assume a large part of these memberships come from the U.S. which would put Costco’s membership penetration rate near the 30%-35% range.

Many of Costco’s members largely come from high-income households and as a result, is in direct competition with Amazon. It's likely that many households will eventually decide to keep only one of the two memberships. Not a great sign for Costco shareholders while Amazon continues to release an array of new content and services.

In the last few years, Amazon has also rapidly increased its warehouse density. In 2012, close to 7% of the total U.S. population was within 20 miles of an Amazon warehouse. This number shot up to 44% by mid-2016. Greater warehouse density gives Amazon the ability to increase bulk delivery and also reduce the time of delivery. 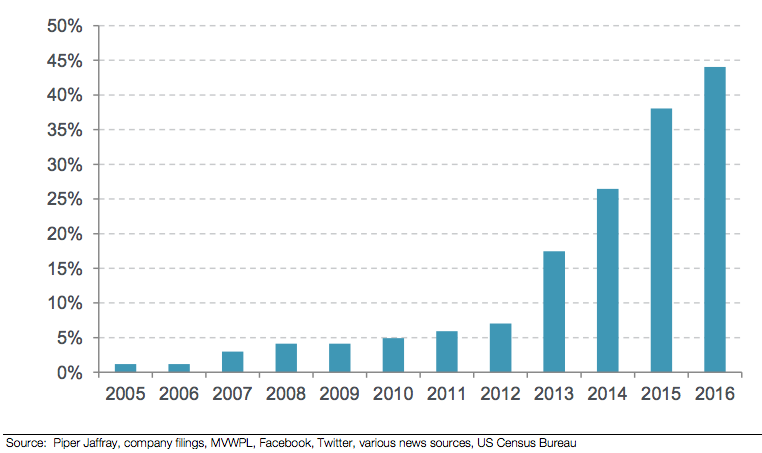 Fig: Percentage of population which is within 20 miles of a warehouse or delivery station of Amazon.
Source: Piper Jaffray, U.S. census bureau

Amazon’s growing ecosystem with its Alexa virtual assistant, Prime videos, Prime pantry, Prime wardrobe (recent addition of Nike - no more head to toe Kirkland) and even more will push households into choosing a Prime membership and potentially canceling their Costco membership. Obviously, this will only hurt the company and make it difficult to continue delivering good comp growth in the future.

What will make things even more difficult is Costco's low gross profit and EBITDA margin which currently stands at 13.3% and 4.2%, respectively. This is well below Amazon's which stands at 35.6% and 9.0%, respectively. As a result, there is almost no room for any further discounts within Costco’s business model. 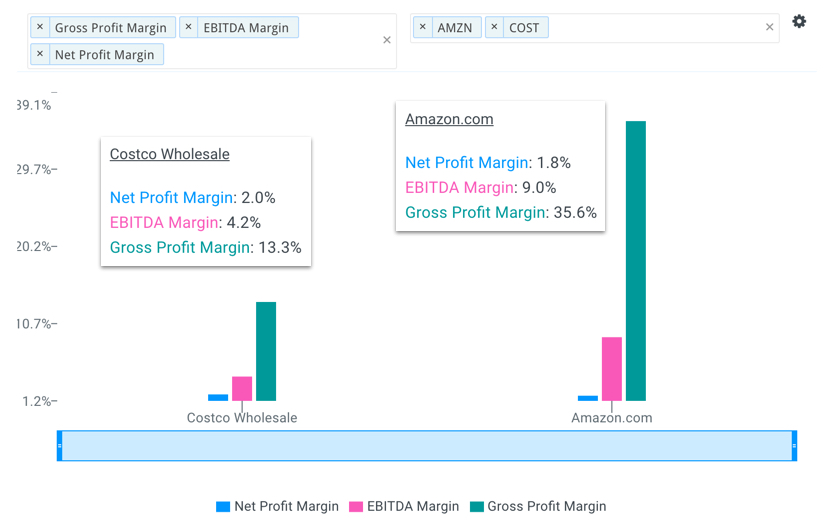 Costco’s stock price increased by nearly 15% YTD as of mid-June. However, since news of Amazon’s acquisition of Whole Foods came in, the stock dropped by 17.5% and those gains were quickly wiped away.

Even after the recent drop, the stock is valued at a premium compared to other brick and mortar stores. The company is currently trading at 26.5x forward earnings and 12.4x forward EBITDA which is well above that of Target (NYSE:TGT), Wal-Mart (NYSE:WMT), Walgreens Boots Alliance (NasdaqGS:WBA) and CVS Health (NYSE:CVS). 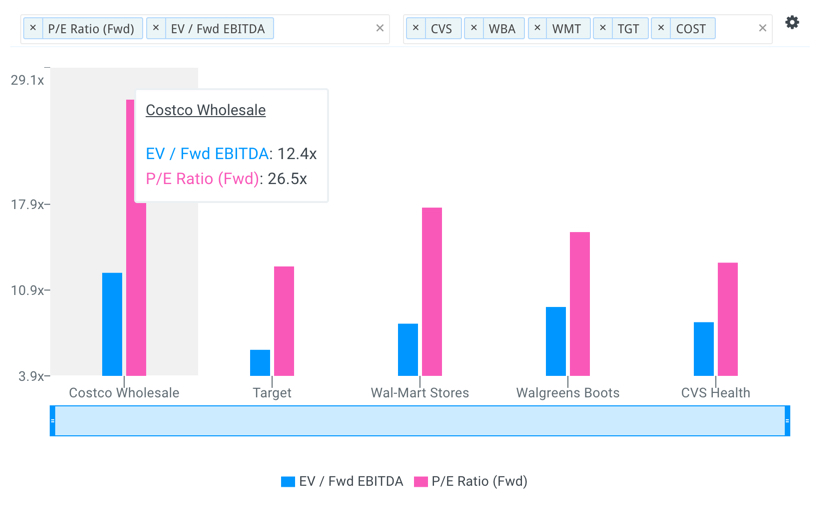 Costco's multiples are close to the valuation levels of many high growth tech companies which is surprising given the current challenges faced by the company.

The discount retailer will continue to feel negative market sentiment as Amazon continues its bull run and increases the penetration of Prime membership. Even if short term performance is good, the market will likely remain pessimistic about the long term growth prospects of Costco. This should push the stock further into bear territory. In addition, the current premium valuation baked into Costco's multiples will also likely hinder any potential comeback by the stock. It would be wise for value investors to keep their distance from COST shares.

The entry of Amazon into brick and mortar with the acquisition of Whole Foods is the greatest worry for the company. This is potentially why rumors have surfaced that Costco may be making a bid for Whole Foods above Amazon's offer. An offer by Costco would simply be a defensive move to subdue Amazon, although only for a short period. Furthermore, a bid above Amazon's would likely require Costco to pay at least 35.0x forward earnings (current deal value is at approximately 32.0x). Not an ideal price for Costco shareholders.

Costco’s stock witnessed a sudden fall as news about Amazon’s entry into the brick and mortar space was revealed. Even after the drop, the company’s valuation multiples are still priced at a premium to other peer retailers. In high-income households, both Costco and Amazon maintain high membership penetration rates but the former is fighting a losing battle. Amazon continues to add features and other attractions to its Prime membership which will continue to diminish the total value proposition of a Costco membership.

The negative market sentiment towards Costco will likely continue for some time which will weigh heavily on shares. At the current price point, Costco appears overvalued given the headwinds faced by the company.

Note this is not a buy or sell recommendation on any company mentioned.
Photo Credit: theday