The conclusion illustrates that the company is currently trading slightly below its fair value. 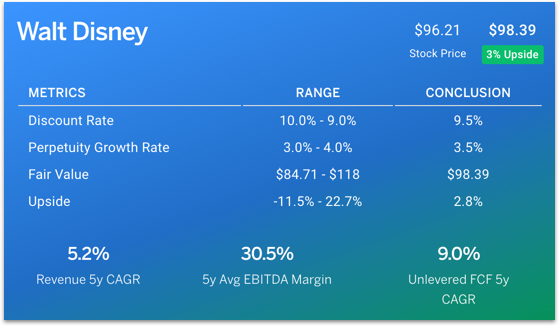 Finbox.io uses analyst forecasts for Revenue as the starting assumptions in a model. I typically review the analyst forecast and modify the growth rates based on historical performance, news, and other insights.

How much of the revenue Disney generates will the company convert into profit? The analyst projected EBITDA margin forecast for Disney below also looks reasonable. In fact, it could prove to be a very conservative forecast as margins have been improving over the last few years. However, I will use these conservative numbers in my assumptions.

Spending on plant, property, and equipment allow the company to operate and grow. Disney has spent anywhere from 6.2% to 9.0% of revenue in the last five years on capital expenditures. In the chart below, you can see analysts expect this figure to drop to 5.8% by 2018.

I prefer being conservative in my DCF analysis so I assume capex margins remain flat at 6.0% starting in 2018.

Note: this capex adjustment brings Disney’s fair value midpoint conclusion down from $100.79 to $98.39.

I don’t explicitly show the calculated free cash flows that result from my assumptions above. You can view them in my model here.

Next, I need a discount rate or Weighted Average Cost of Capital (WACC) to calculate the present value of my forecasted free cash flows above. I determined a reasonable WACC estimate for Disney to be 9.5% at the midpoint. You can view my calculations here. 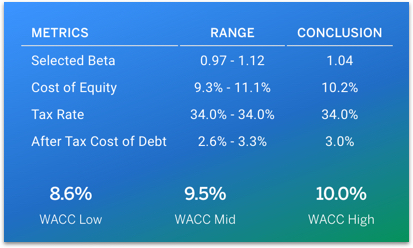 Disney will still be valuable at the end of the 5 year forecast period. To estimate this future value (Terminal Value), we can capitalize it's terminal cash flow using the Gordon Growth formula. Here is data provided by finbox.io to help make my perpetuity growth rate assumption: 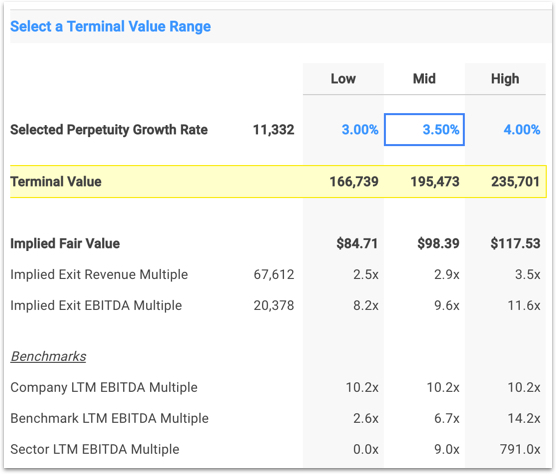 This selection may seem aggressive but the implied EBITDA exit multiple of 9.6x is slightly below Disney’s current trading multiple and slightly above the sector median multiple. Therefore, I'm comfortable with 3.5%.

The selected assumptions above show that Disney's intrinsic value is $98.39 per share - currently undervalued by 3%.

You can view my full DCF analysis here. You can also easily build your own using finbox.io’s quick 6-step DCF model builder for Disney here.