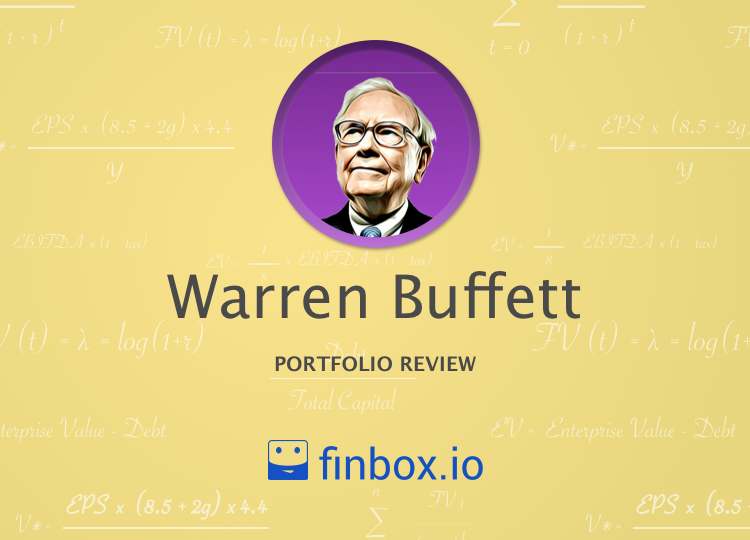 Berkshire’s Portfolio: What's Buffett Been Up To?

With Berkshire Hathaway stock at all-time highs, I wanted to check in on Warren Buffett’s reported holdings. In a recent Forbes interview, he recently prophesied that the Dow Jones Industrial Average would trade around $1 million in the next hundred years.

While that may seem insane given the Dow is currently at $23,500, the Dow would only need to compound at around 4% a year to hit that mark. That doesn’t seem too farfetched when you consider that an investment in the top 100 public companies in 1917 would have compounded at 5.8% and around 10% when you add in accrued dividends.

What's also interesting to note is that Buffett’s approach to investing has yielded Berkshire Hathaway 20%-plus annualized returns since 1965. Warren Buffett's prolific career has received its fair share of media attention over the years, but this recent HBO documentary is one of my favorites.

So, what stocks and sector excite Mr. Buffett today? Which of his holdings may be near good entry points now? I investigate these questions in this post.

On November 14, 2017, Buffett's firm Berkshire Hathaway filed their quarterly Form 13F regulatory filing. I reviewed the 13F filing to get a sneak peek at holdings in Berkshire's massive portfolio.

Berkshire's stock portfolio totals nearly $177.7 billion according to the latest filing. The list value of stock holdings is up 9.6% when compared to the last quarter.

Berkshire's QoQ Turnover, a measure of the level of trading activity in a portfolio, for the latest quarter was 10.6%. As indicated by the low turnover ratio the low portfolio turnover, Buffett likely has high conviction in these holdings.

The Ideas section of finbox.io tracks top investors and trending investment themes. You can get the latest data on the holdings discussed below here. The following table summarizes Berkshire's Largest Holdings reported in the last filing:

The seven positions above represent 71.9% of the hedge fund's total portfolio.

I used finbox.io to find Buffett's largest buys last quarter. Bank of America (BAC) noticeably tops the list. While this is the first time Bank of America investment shows up on a Form 13F filing, Berkshire made its original investment in the company during the financial crisis. Mr. Buffett made a bet on Bank of America during that turbulent economic period for the global economy and has been rewarded handsomely for doing so. Earlier this year, Berkshire exercised rights that were part of the original deal to build a stake of 679 million shares in the company, making it the largest shareholder in the bank. Berkshire has made approximately $14 billion on original $5 billion investment so far.

Here's a summary of the three biggest position reductions this quarter:

Revenue growth can be a strong signal of product market fit. The table lists 5 stocks in Berkshire’s portfolio that have strong top-line growth.

The next ranking table lists the stocks in Berkshire’s portfolio with the best dividend yields. Dividend seekers can appreciate stocks that earn upwards of 3.5% excluding price appreciation and are also backed by this investing legend.

The table below ranks stocks in Berkshire's portfolio with most bullish analyst targets:

The Piotroski Score is a stock score developed by Stanford accounting professor Joseph Piotroski. The stocks listed in the table below have the best Piotroski Scores. When two stocks have the same score, the larger holding is ranked higher.

There are several benefits of mimicking Berkshire Hathaway holdings. He historically has very low portfolio turnover - so he only invests when he feels a high degree of conviction in management’s ability to deliver on state objectives. Furthermore, if one of his investments hits a hiccup, he can deploy Berkshire’s multi-billion cash war chest.
If things go really really wrong, he is not shy about leveraging his stellar reputation to work through the problems. (See Solomon Brothers, Bank of America, other scandals).