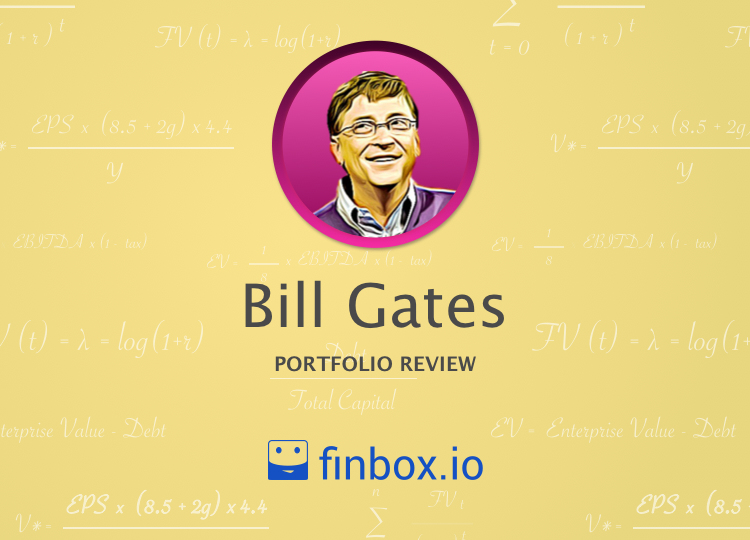 Bill Gates may be a better investor than entrepreneur as we dig deep into the billionaire's investing strategy and stock portfolio.

From Tech Titan to Diversified Investor

When you think of Bill Gates, you probably think of Microsoft (NasdaqGS: MSFT), rather than investing. But, as the second richest person in the world, Bill Gates is also one of the biggest investors in the world.

Over the years he has been selling off his stake in the company – at one stage selling as much as 80 million shares. The cash from these stock sales has gone into the Bill and Melinda Gates foundation, a personal investment fund. He now owns around 103 million Microsoft shares or 1.3% of the company, worth more than $4.5 billion. That amounts to only 5% of his fortune derived from his Microsoft holdings.

Overall, the wealth Bill Gates personally controls can be divided into four parts:

The Bill and Melinda Gates Foundation was established in 2000, and as of 2016 held over $40 billion in assets. The foundation’s funds are held in a trust which receives contributions from Bill Gates as well as from Warren Buffett. Every year since 2006, Warren Buffett has donated between 1.25 and 2.2 billion dollars’ worth of Berkshire Hathaway shares to the foundation.

The foundation intends to spend all of the resources in the trust within 20 years of the deaths of Bill and Melinda Gates. Their intention is that the funds will all be spent this century.

His private technology investments tend to be in industries that interest him. Gates is known to have invested in the following private companies:

The rest of his wealth and the foundation’s assets are managed alongside one another by a dedicated investment management company.

Bill Gates’ personal investment portfolio and the foundation’s assets are both managed by Cascade Investments. This is an investment management company set up in 1995 specifically to manage Gates’ wealth.

The firm is run by Michael Larson and a small team. Gates has stated that he wants to focus on the foundation’s activities rather than on investing. He has therefore given a high degree of autonomy to Michael Larson. It has been reported that Cascade Investments has earned Gates an 11% return since 1995, though that is difficult to confirm.

Cascade manages most of the money within the firm but also farms out around $10 billion to other money managers.

Cascade does not voluntarily disclose Gates’ investments. In fact, they have been known to use various investment vehicles to obscure the true ownership of some assets, notably real estate investments. However, the Trust’s SEC filings do give the public an indication of the types of investments the fund manager makes.

Larson is considered a value investor and runs a very conservative portfolio across a wide range of asset classes. Investments include real estate, private equity, bonds, and stocks. The trust has very low turnover and often goes months at a time without making a trade.

Among the private equity investments, Cascade has purchased a 45% stake in Four Seasons Resorts and Hotels. The fund also invests in REITs that focus on luxury hotels and resorts.

It’s clear from these investments that the objective is steady capital appreciation rather than high-risk market-beating returns. However, slow and steady returns can still compound nicely over time, which is why Gates now has more than $80 billion to his name after giving away as much as $38 billion.

On November 14, 2017, the Bill & Melinda Gates Foundation Trust filed their quarterly Form 13F regulatory filing. I reviewed the 13F filing to get a sneak peek at holdings in this gigantic portfolio.

The Foundation's stock portfolio totals nearly $25.8 billion according to the latest filing. The list value of stock holdings is up 11.5% when compared to the last quarter. As a benchmark, the S&P 500 was up only 3.9% over the same period.

The Ideas section of finbox.io tracks top investors and trending investment themes. You can get the latest data on the holdings discussed below here. The following table summarizes Gates Foundation Trust's Largest Holdings reported in the last filing:

The biggest single holding is in Berkshire Hathaway (48.8% of portfolio), but that is due to Warren Buffett’s donations which are made in the form of Berkshire stock. The largest sales the trust makes are also typically in Berkshire shares.

The seven positions above represent a significant 87.8% of the total portfolio.

Revenue growth can a strong signal of product market fit. The table lists 5 stocks in Gates' portfolio that have strong top-line growth.

The next ranking table lists the stocks in Gates' portfolio with the best dividend yields.

The table below ranks stocks in Gates' portfolio with the most bullish analyst targets:

Bill Gates has gone from a tech titan to an affluential investor. Through the Bill and Melinda Gates Foundation, he's been able to steadily grow his wealth and now listed as the richest person in the world. Individuals should take a closer look at Bill Gates' holdings above.