Sneak Peek of an Undervalued Gem

Alex Poulos is a top equity analyst offering independent research through his Undervalued Gems service at Seeking Alpha. We recently asked Alex if he’d share one of these gems with our finbox.io members and he kindly obliged.

The January Issue
2015 is nearing a close with the major market indexes hovering near the break-even point for the year. With dividends included as of the end of trading on the 29th of December, the S&P is up 3.03% for the year. I am pleased to report the model portfolio has posted a gain of 8.09%. The year was quite volatile with sharp sell-offs that have no doubt frayed many a nerve. Let’s hope 2016 will bring better tidings.

This month’s focus company.
The focus company for January is T-Mobile (TMUS) the third largest mobile telephony provider in the US. A quick scan of the company’s finances would make the choice a departure from the typical companies the Undervalued Gems service focuses on as TMUS barely posts positive EPS. You are correct; I am not interested in TMUS per se as a standalone company. Instead, the real value is in the takeout premium.

There is a tectonic shift emerging in the usage of the internet. The Internet is becoming more mobile, with the largest players in the field Facebook (FB) and portfolio holding Alphabet (GOOG) shifting their focus to mobile offerings over the traditional desktop. The home router is becoming ubiquitous freeing the use of tablets, laptops, etc. from being tethered to a cord. The losing of the cord has now manifested itself in the “cord cutting” or “cord shaving” phenomena that continue to upend the business model of the pay-TV industry. The traditional cable bundle, where the providers resell a large package of channels many of which will never be watched is now seeing net subscriber losses. Disney (DIS) is very exposed here with the ESPN division the companies largest division. The announcement of subscriber losses has led to a sharp sell-off in the share price in late July and again at the end of October. Even the much anticipated Star Wars release has not helped much here. 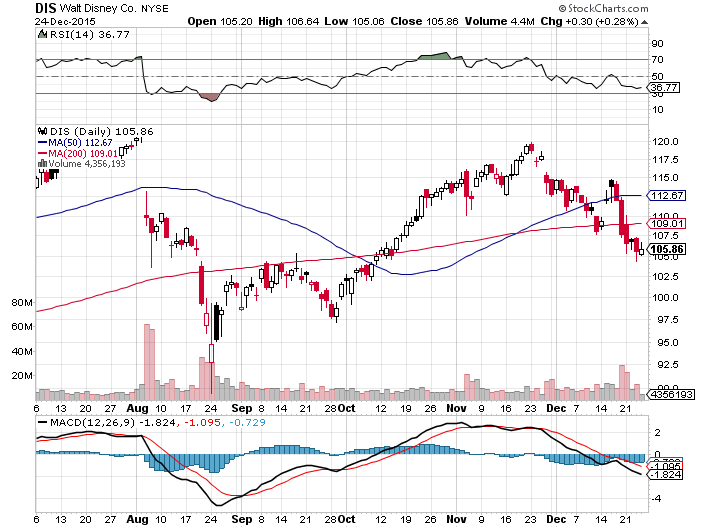 The cable company’s business model is relatively safe; they are the main providers of broadband access that is essential for the cord shaving phenomena. Broadband access allows for faster downloads of content which can be streamed to your TV via Wi-Fi through services such as Netflix (NFLX), YouTube and Hulu. One cable executive remarked they expected to lose 60% of their pay-TV subscribers over the next five years. So how do companies such as Comcast make up the revenue lost by the shift in viewing habits? The most immediate answer is to enter into a similar field that requires significant capital expenditures, higher barriers to entry with a few entrenched players. The mobile telephony space is right out of central casting.

I will be watching with great interest a few keys events in the first half of 2016 to determine the pace of change the industry in undergoing. The first event is the eagerly anticipated spectrum auction that will commence in March. Portfolio holding Sinclair Broadcasting (SBGI) is well poised to generate substantial funds if the early estimates hold true. Comcast (CMCSA) is widely expected to be both a buyer and seller of the spectrum, with a particular interest in the 100MHz band that is perfect for Wi-Fi enables telephony. The purchases will augment existing properties that should allow for additional roll-outs throughout the country. The second key event will be when Comcast MVOD service goes live in the second quarter. I suspect we will have ample clues as to CMCSA mobile telephony intentions once they have provided service for a few quarters.

How do the above events affect T-Mobile
T-Mobile remains the most exciting company in the space due to their small yet growing presence. AT&T (T) in a move to further consolidate the industry made an attempt to purchase T-Mobil that was scuttled by the Justice Department. Justice seems quite intent on having four nationwide players offering service, a change of administration will most likely not change the policy. T’s failed attempt cost them a considerable break-up fee that has been used to further T-Mobile network. T-Mobil continues to pressure the two largest players in the field Verizon (VZ) and T with lower packages that have led to increasing customer counts.

Heavily indebted Sprint was long rumored to be interested in taking a controlling stake in T-Mobil to consolidate further their weak position. Sprint is overleveraged and having a difficult time gaining traction, not the most coveted partner. The courtship ended when it became apparent the FCC would not allow the field to shrink to three players. I do believe T-Mobil is an attractive property here, especially with the company’s proven track record to gaining customers. T-Mobil will be bought out, yet it will not be by a traditional player a new entity will need to emerge. 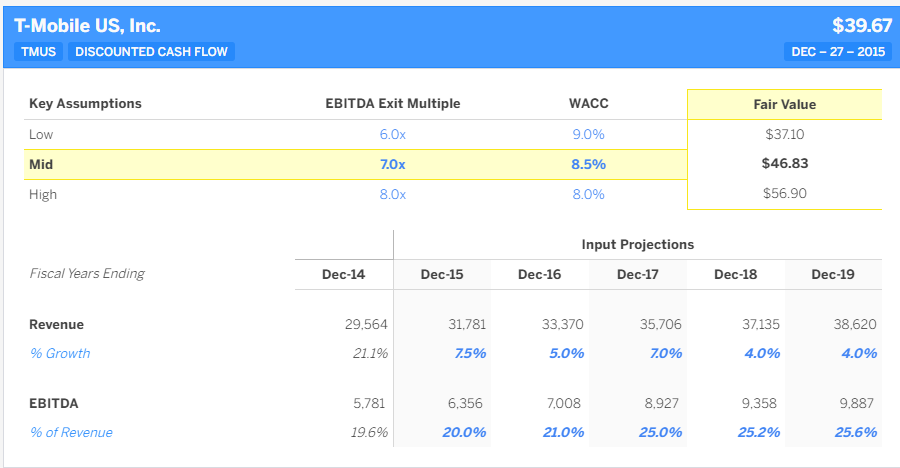 The base case for TMUS without a buyout offer is $46.83 per share. TMUS has reached a critical juncture as an ongoing company; the subscriber base has grown large enough to mitigate some of the costs necessary to operate the network. The excess revenue generated will lead to sharp gains in net earnings per share with TMUS expected to post earnings of $1.60 with $2.50 per share widely expected in 2016. The expectations are reasonable with the sharp jump in EBITDA expected in 2017 and beyond. The TMUS story becomes more interesting if a buyout emerges with typical premiums of 8x EBITDA emerging. TMUS is a unique and valuable property that is now generating significant earnings. A compelling offer will need to develop to get the current team to part control. Using the 8x EBITDA figure, a buyout number of $55.51 is entirely possible. 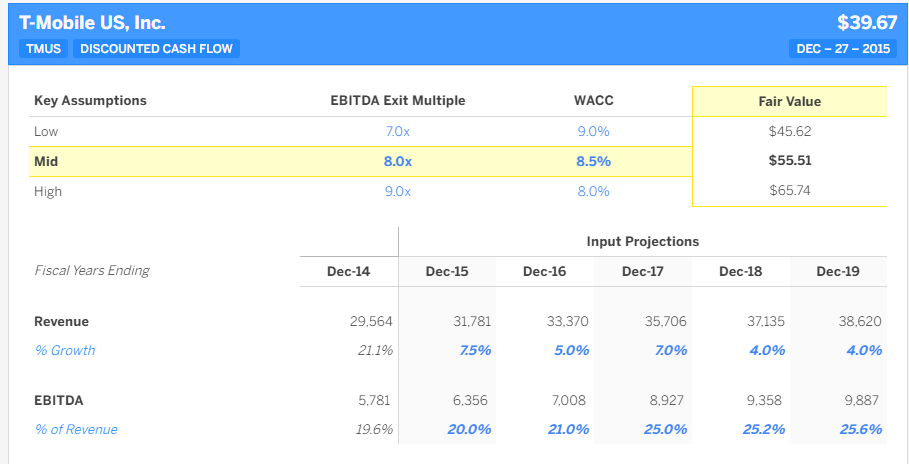 An investment in TMUS will require a longer term horizon (2017 and beyond) with a strong stomach to handle volatility. The share price sold off roughly 15% post what was considered a disappointing earnings release. The culprit is revenue recognition from leasing that accounts for 2% of EBITDA. The Street equated the recent results as a miss that culminated in the sell-off. TMUS remains a fund favorite that led to an exaggerated move down. At this time, I believe patience will be well rewarded. I would add shares of TMUS to the model portfolio between $36 and $37 per share. A separate update will be sent out when a buy is triggered. 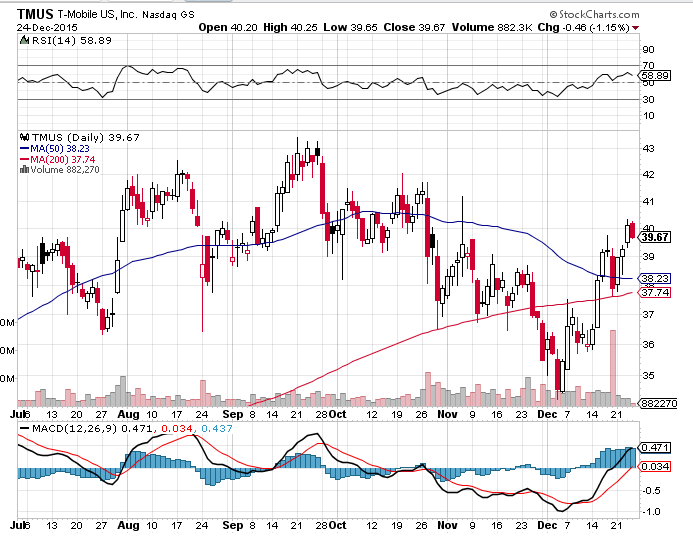