Alex Poulos shares his bullish views on Microsoft (MSFT) below. A must read...

Feature Company for June is Microsoft
MSFT remains a well-known name to most investors. The analysis below will focus on the top 3 reasons why MSFT is a compelling purchase at this time. 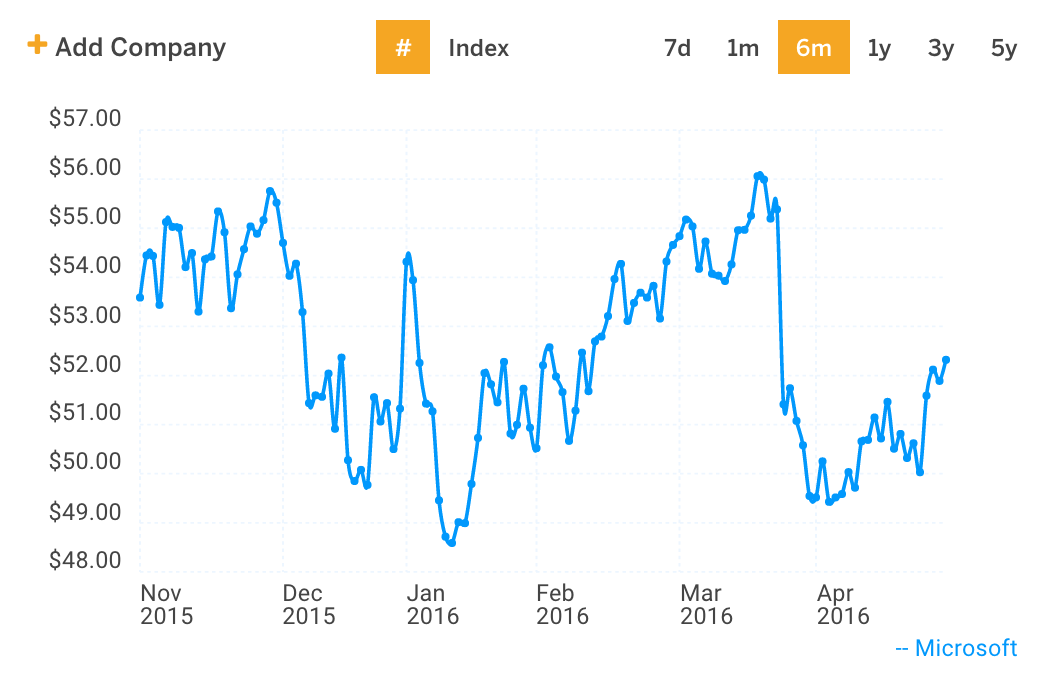 Part 1: The CEO
A stellar management team will find new ways to surpass expectations whereas a lousy team will find new and inventive ways to disappoint. I have avoided MSFT since the 1990’s specifically because the CEO to be blunt was incredibly inept. The reign of Steve Ballmer quite simply was a horror show with a multitude of strategic blunders such as the purchase of Nokia, which Satya Nadella is unwinding and the mating dance to buy Yahoo (YHOO) for $53 billion that mercifully did not come to pass.

The dismissal of Ballmer set the stage for MSFT current revival under the steady hand of Nadella. Thus far, in my view, he has proven himself to be quite adept at running the sprawling enterprise that is MSFT. The most interesting decision made under his tenure is the move to a subscription-based offering for the Office 365 software and an aggressive push into cloud computing.

Part 2: Subscription Based Enterprises
Coming off the heels of Adobe Systems (ADBE) move to convert it's highly successful creative software franchise to a subscription based model with monthly recurring revenue, the share price has moved in a virtual straight line up. The basis for the movement is simplistic yet intuitive, by spreading out the overall cost of ownership over a longer time frame revenue recognition becomes consistent and predictable instead of its traditional lumpy pattern. Previously, ADBE would receive the entire revenue upfront once on initial purchase. Depending on the end users need, additional purchases could be several year later depriving ADBE of further sales.

MSFT is mirroring the move with the move towards an Office 365 subscription model. The current pricing for the service ranges from $5 per month to $12.50 instead of the one-time upfront payment. An additional bonus is the impact of margins. By selling directly to the consumer, ADBE and by extension MSFT will see margin expansion as a decrease in revenue sharing with third-party vendors coupled with upgrades via downloads. Businesses that exhibit the ability to expand margins combined with a more predictable revenue stream warrant a much higher multiple. MSFT has yet to receive a higher multiple which is the opportunity before us.

Part 3: The Cloud
The move into the cloud remains one fo the biggest stories in the sector. Amazon (AMZN) through its AWS division is widely considered to have the commanding lead in the field. AMZN share price continues to elevate to new highs especially once CEO Bezos decided to report separately the AWS divisions revenue aside from the retail sales. Analysts are frothing at the mouth with one recently stating AMZN may become the first trillion dollar company. To say the least, ignore the hyperbole, I remain highly skeptical of this proclamation.

AWS revenue run rate is in the $10 billion dollar range, on par with MSFT's Azure division. Interestingly, if you include the Office 365 unit which is a cloud-based platform, magically MSFT vaults ahead of AMZN. Currently, the four top competitors in the field are AMZN, MSFT, the hapless IBM and portfolio holding Alphabet. The listing is currently in the order of share; let's look at this list from a longer term perspective of hiring and retaining talent. IBM in my view will not be able to compete successfully with the other players simply due to the current environment within the company. IBM continues to layoff talent at an alarming rate, a major negative for moral. The company will remain challenged in attracting top talent, a key in this industry. Simply put forth, if you are a top engineer where would you consider starting your career? From a longer term perspective, this leaves the field to three well-heeled players. I have a hard time envisioning AWS continuing to dominate the field going forward. AMZN remains a retailer with the grandiose goal of conquering the retail sector. I find it virtually impossible to envision a credible scenario where one company will have the chops to dominate two separate fields especially with huge entrenched pure plays available.

For example in the retail space, a diverse group of retailers such as Wal-Mart (WMT) and portfolio holdings Dollar Tree (DLTR) and Dollar General (DG) has rallied sharply post their earnings result. The mall-based retailers such as Macy’s (M) and Nordstroms (JWS) have suffered as AMZN encroaches on their turf. AMZN will continue to devote significant time and resources to build out their retail aspirations. The retail sector remains brutally competitive where only the strong survive.

Circling back to the cloud opportunity, MSFT remains in prime position to dominate the field going forward. A major catalyst for the share price will come when Nadella decides to break out cloud revenues separately. Keep in mind; Azure will cannibalize some of MSFT on-site sales. Partly due to this plus the continuing push into a subscription based platform with Office 365 overall revenue growth will remain muted over the next couple of years. Revenue growth in 2016 will come in lower than in 2015 with the upside coming in 2017. The upside is a widely expected 2% plus expansion of overall margins which is quite meaningful when you are dealing with a company that generates over $90 billion in sales. 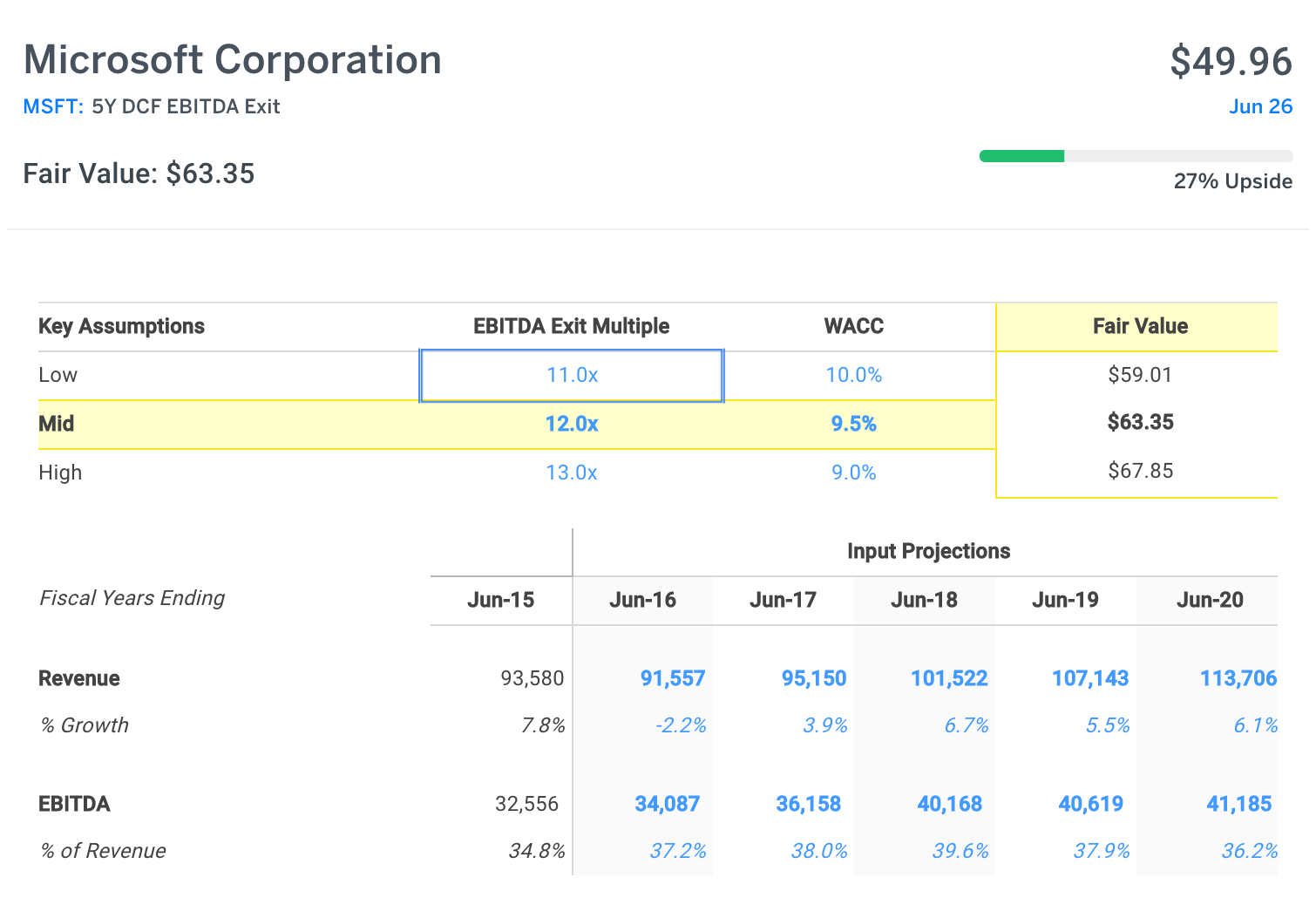 My fair value on MSFT is $63.50, comfortably higher than the current share price. The WACC used is 9.5% which in my opinion is aggressive. MSFT balance sheet has a net cash position which reduces overall leverage while simultaneously raising its discount rate or cost of capital. The business world views a net absence of net as an inefficient use of capital in light of the virtually non-existent interest rates available. Predictably, I have a far different view that I suspect many readers will share. The absence of debt is a sign of strength. The EBITDA multiple used is lower than MSFT's 10 year range adding a layer of safety by employing conservative numbers. In my view, you are far better off applying more conservative numbers and receiving a “pleasant surprise.” as your forecast was proven to be too pessimistic.

MSFT continues to employ the power of its core franchise to generate free cash flow in a positive manner that will continue to benefit shareholders. MSFT uses a two-step process familiar to many when it comes to returning cash to shareholders. The most direct form is the quarterly dividend of 36 cents per share. MSFT current yield is 2.75% with an expected hike to come in the fourth quarter. The second method is the repurchase of shares via their aggressive share repurchase plan. Share repurchase programs are helpful as long as R&D remain a priority. In the case of MSFT, the cash flow generated outstrips their needs making a share repurchase plan an entirely acceptable method of rewarding shareholders. MSFT along with Johnson and Johnson (JNJ) are the two remaining corporations with a triple AAA credit rating from the credit agencies. MSFT is the rare occasion where you have a growth opportunity ensconced in the cocoon of a well-established entity.

The shares of MSFT will be held for an extended period with dividends reinvested. I am very pleased with the leadership shown by Nadella, the key ingredient missing from MSFT for over a decade now. As per custom with all holdings, I will follow the name and post timely updates when warranted.