Alex Poulos remains bullish on AbbVie (ABBV). His supporting analysis is presented below.

Intellectual property remains the lifeblood of the research-based pharmaceutical industry. IP bestows upon the owner the absence of competition for the particular compound, ensuring monopoly-like profits. The IP remains a "wasting asset" due to the expiration, thus underpinning the need for constant creative destruction brought forth by additional monies and time spent developing novel products to cure the various ills of humanity. The article below will update my stance on AbbVie in light of yesterday's patent ruling.

Coherus Patent Challenge
Coherus Bioscience's (NASDAQ:CHRS) patent challenge received a boost, with the U.S. Patent and Trademark Office's Patent Trial and Appeal Board agreeing to proceed with a review of the patents protecting ABBV's top-selling product Humira from a biosimilar challenge. The ruling is expected to come within a year with an expected appeal to extend the process an additional year. Shares of ABBV sold off on the news. Let's examine the fallout a bit to gain further perspective. 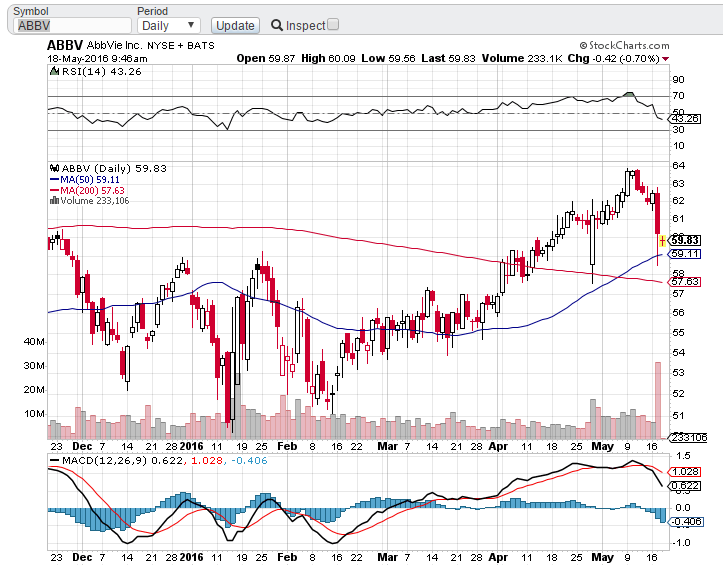 Naturally, the shares have sold off on the news, yet as illustrated by the chart above, the shares have performed quite well this year. The news will cause some to sell their shares, yet in my opinion, the move is shortsighted for reasons that will be laid out below.

Strength of the Pipeline 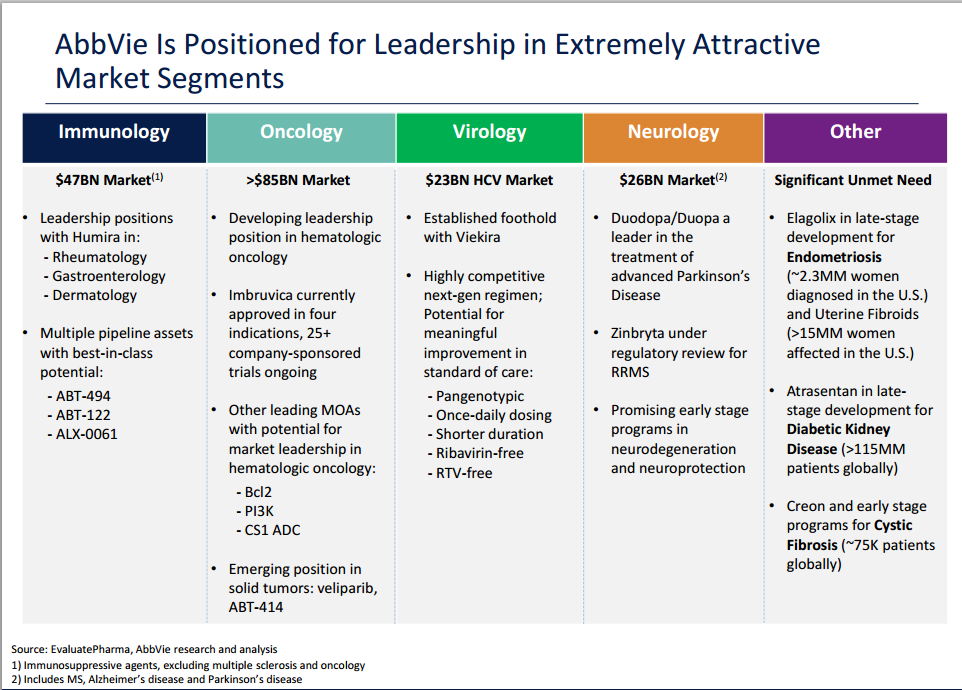 ABBV management recognizes the need to replace the existing pipeline of products. ABBV continues to use aggressively the windfall of cash generated from the Humira franchise to build out and purchase products such as the recent acquisition of Imbruvica. As illustrated by the slide above, Imbruvica remains the cornerstone of ABBV burgeoning oncology platform with additional products such as the recently acquired Stemcentryx and its lead compound dubbed Rova-T.

Not to be outdone, the Immunology franchise is ripe with next-gen products designed to offset the loss of revenue from Humira with the most promising compound currently in ABBV's platform dubbed ABT-122. ABBV is employing a similar strategy utilized by Gilead Sciences (NASDAQ:GILD) to extend the life of the franchise by making incremental additions. Assuming ABT-122 and ABT-494 are brought to market, ABBV will have successfully defended their franchise. Additional data on the viability of the clinical pipelines is crucial, which makes the upcoming R&D event on June 3rd a must-see event for shareholders. 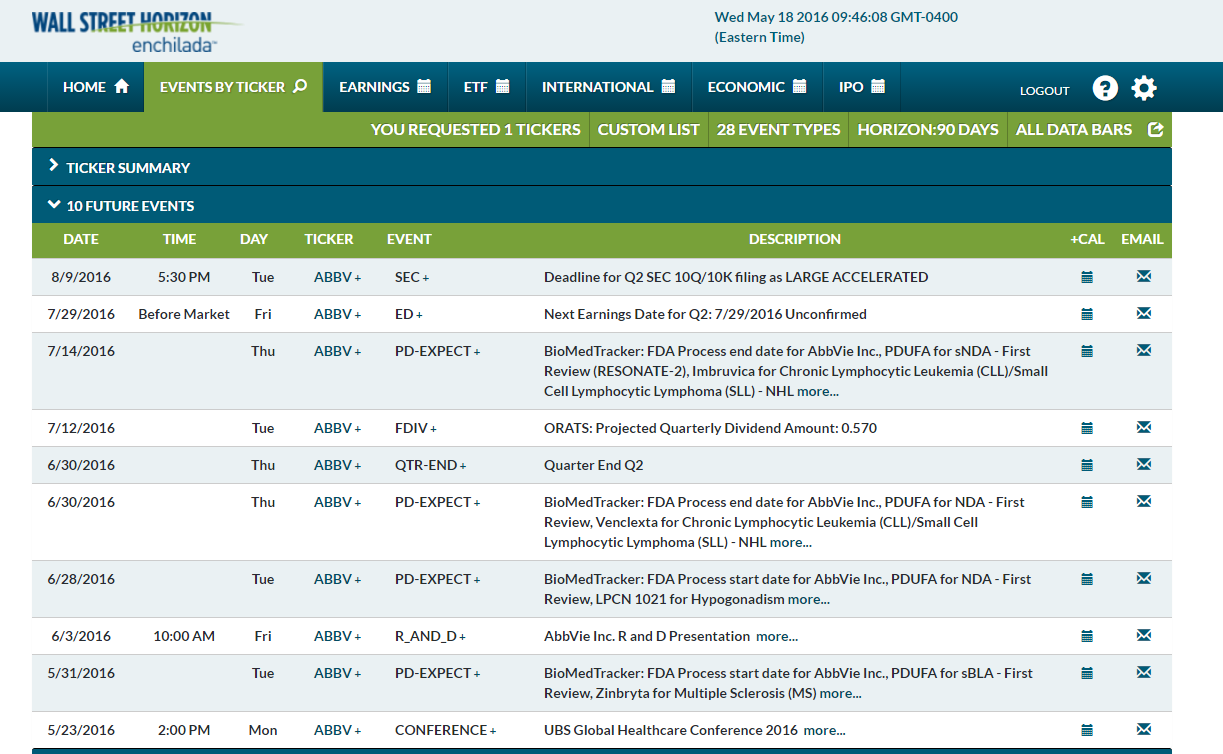 My fair value model remains unchanged in the face of the recent ruling. The earliest a biosimilar product will enter the market is late May of 2018. The model is most sensitive to the 2016 numbers and discounts the future years more aggressively the further out you go. I find it interesting that just because a generic or biosimilar challenge is filed, many automatically believe the IP is invalid, and a ruling for the challenger will be issued.

The role of the Dividend
The importance of ABBV's dividend needs to be thoroughly vetted to gain additional perspective. ABBV's current dividend yield is 3.76%, similar to what many utilities are currently paying. In today's yield-starved markets, a high dividend rate enhances the appeal of the company. A high yield in itself does not make the company attractive, though. For example, GlaxoSmithKline (NYSE:GSK) offers the highest yield in big pharma, yet continues its streak of chronic underperformance. The reason for GSK's underperformance is two-pronged: The first is the relatively inept tutelage of the CEO, and the second is the mediocre product pipeline.

ABBV'S management team thus far has proven itself to be quite capable, with the ultimate results coming forth in the next few years. If the key pipeline products are brought forth as expected, then the company will continue to outperform. The upcoming R&D day will be quite revealing. ABBV continues to invest aggressively the windfall brought forth by Humira into additional properties, which in my view demonstrates management is not idly sitting by while other competitors pass them by.

By allowing the dividend to compound here, a long-term investor should do quite well. The dividend remains secure and well-funded. If anything I expect an additional increase to be announced by year end. The dreaded patent cliff has yet to be established, yet ABBV is trading as if Humira sales will plummet in 2018. I remain long here and do not view the recent court ruling as a reason to change my stance. I would like to thank you for reading, and I look forward to your comments.

Investors are always reminded that before making any investment, you should do your own proper due diligence on any name directly or indirectly mentioned in this article. Investors should also consider seeking advice from a broker or financial adviser before making any investment decisions. Any material in this article should be considered general information, and not relied on as a formal investment recommendation.