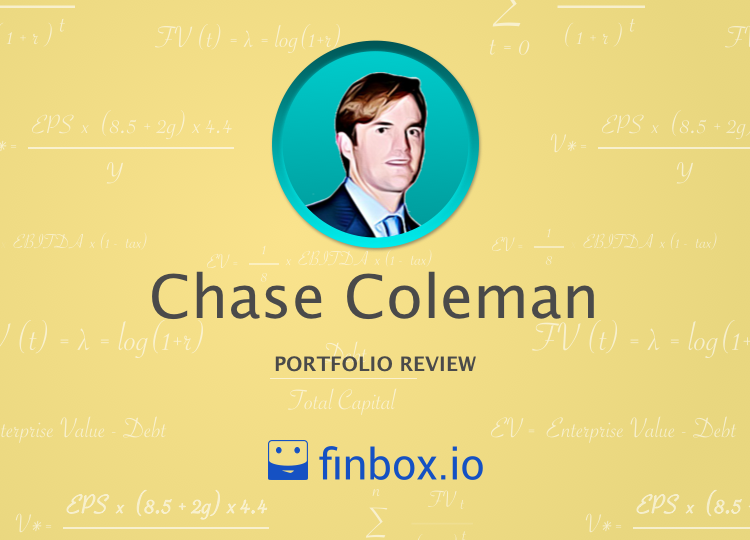 Chase Coleman, the founder of Tiger Global Management, is best known for his tech investing prowess. I highlight the technology stocks he's purchasing going into 2018.

At 42 years old, Chase Coleman is possibly the youngest of the big-league hedge fund managers. In 2011, when he was 36, his Tiger Global long/short equity fund returned more than 45%. That made it the most profitable hedge fund in the world according to Bloomberg. Tiger Global also makes venture capital investments globally; greatest hits include Facebook, LinkedIn, JD.com, Yandex and Despegar.

Coleman’s career in investments started in 1997 at Julian Robertson’s Tiger Management. Robertson was one of the top hedge fund managers of the eighties and nineties and is credited with the growth in popularity of the hedge fund business model.

When Robertson closed his fund to outside investment in 2000, he seeded around 30 young hedge fund managers with $25 million each. Chase Coleman was one of these so called ‘Tiger Cubs’, and went on to become one of the most successful. Much of the firm's success can be attributed to its focus on internet and technology-related investments, its long-term venture capital business and his conviction when sizing positions.

Coleman’s partners include Scott Shleifer and Lee Fixel, both of whom have spotted internet-related investments long before they went public.

Tiger Global has a knack for getting into companies and sectors just before the rest of the investment community, and then riding the momentum for as long as it lasts.

Because Tiger Global invests in high-growth companies, its approach relies on valuation, as well as understanding trends in technology and in market psychology. Most of the private companies Tiger Global has invested in have also gone on to be successful and profitable public companies.

Tiger Global often invests aggressively and in 2015, three stocks accounted for 60% of the hedge fund. This level of concentration has worked well most of the time, but can also hurt performance when the bets don’t work. In the first quarter of 2016 the fund fell 22%, dragged down by sizable positions in Netflix and Amazon.

Tiger Global Management's stock portfolio totals nearly $14.1 billion according to the latest filing. The list value of stock holdings is up 22.0% when compared to the last quarter. As a benchmark, the S&P 500 was up 3.9% over the same period.

Quarter-over-Quarter Turnover (QoQ Turnover) measures the level of trading activity in a portfolio. Tiger Global Management's QoQ Turnover for the latest quarter was 24.8%, so the firm appears to trade a significant percent of its portfolio each quarter.

The Ideas section of finbox.io tracks top investors and trending investment themes. You can get the latest data on the holdings discussed below at the Chase Coleman page. The following table summarizes his firm's largest holdings reported in the last filing:

The seven positions above represent 63.8% of the hedge fund's total portfolio.

Not surprisingly, the majority of Tiger Global Management's holdings and recent purchases have been in the consumer internet business.

To find stocks in his portfolio that may be unpopular at the moment and trading at cheap valuations, I ranked his holdings by price pullbacks. The ranking table below lists the stocks in Tiger Global Management’s portfolio by stock price performance over the last 30 days.

Managers with more than $100 million in qualifying assets under management are required to disclose their holdings to the SEC each quarter via 13F filings. Qualifying assets include long positions in U.S. equities and ADRs, call/put options, and convertible debt securities. Shorts, cash positions, foreign investments and other assets are not included. It is important to note that these filings are due 45 days after the quarter end date. Therefore, Tiger Global Management's holdings above represent positions held as of September 30th and not necessarily reflective of the fund's current stock holdings.