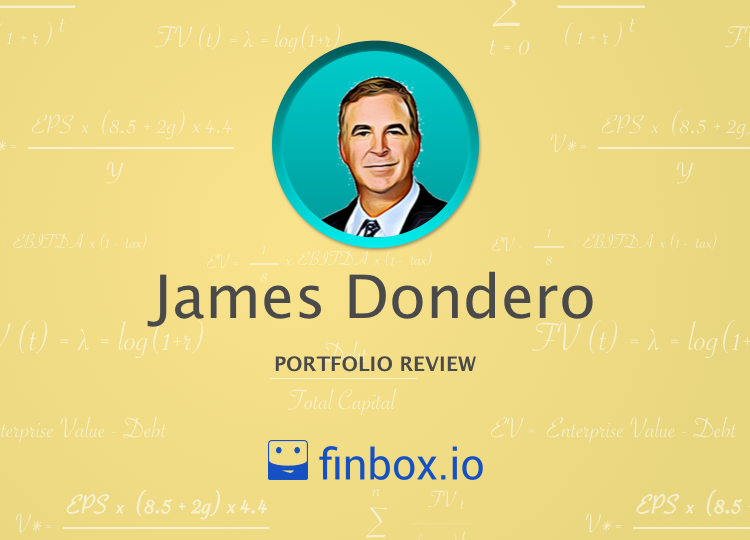 Highland Capital released its quarterly 13F filing with the SEC on February 14th which highlighted a number of high yielding dividend stocks that the firm owns. Although Highland Capital and James Dondero may not be a household name, it's worth taking a closer look at his fund considering it has more than $2 billion invested in equities.

James Dondero is the co-founder and President of Dallas based Highland Capital Management. He is a highly regarded investor in high-yield securities, distressed credit and turnaround situations.

Dondero studied at the University of Virginia before joining the training program at JP Morgan as an analyst. He then moved to American Express (NYSE: AXP) where he was a corporate bond analyst and later a portfolio manager. In 1989 he was appointed Chief Investment Officer at Protective Life where he built the GIC subsidiary.

In 1993, Dondero and Mark Okado founded Highland Capital Management in partnership with an insurance company. They moved from California to Dallas, Texas and set up shop with six staff members. The firm started out investing only in credit but later began investing in other securities classified as ‘alternatives’.

In 2000 the firm launched one of the first alternative mutual funds. Highland has since been a pioneer in the development of collateralized loan obligations (CLOs) and in creating credit-oriented products for retail and institutional investors. The company offers a wide range of investment vehicles including separate accounts, mutual funds, hedge funds, private equity funds, REITs and ETFs. Highland now employs 165 people and manages $18.7 billion.

Dondero is the Chairman of NexPoint Residential Trust (NYSE: NXRT), NexBank Capital, Cornerstone Healthcare Group and CCS Medical. He is also a board member of Jernigan Capital (NYSE: JCAP) and MGM Holdings.

Mr. Dondero is an active philanthropist and supports initiatives in education, veteran’s affairs, and public policy.

Though Highland Capital now invests in multiple asset classes, Dondero says he still analyses potential investments through the lens of a credit investor. He considers cash flow to be more important than any other metric.

Highland’s funds hold as many as 200 different securities, though they tend to be concentrated around a small number of themes. Half of each portfolio will be spread across small diversified holdings and the other half invested in larger positions in high conviction ideas.

Dondero has an aggressive investing style and takes substantial positions in his high conviction ideas. This approach has led to outperformance over the longer term with periods of volatility and underperformance over shorter periods.

Dondero sees his approach to investing as puzzle solving. He will sometimes spend years breaking apart complex deals and turnaround situations to work out the intrinsic value of an investment and identify the risks.

In 2012 the firm began looking at Argentina which was in the midst of a debt crisis. It took two years to build an investment thesis and in 2014 the firm invested in the country’s government bonds. They bought those bonds when they were pricing in a high probability of default and managed to exit with a profit after the debt was restructured.

In 2015, Highland took several large positions in master limited partnerships which owned assets in the oil and gas industry. These MLPs were hard hit by the falling oil price and were trading well below their long-term values. Many of the firm’s investments in energy were too early which hurt performance in 2016 and early 2017, however that bet is now paying off.

Dondero has even profited where Warren Buffett has lost money. In 2013, Berkshire Hathaway invested in the debt of Vistra Energy. Falling gas prices forced Vistra into bankruptcy and Berkshire lost as much as half its investment. Highland bought that debt which later converted to equity when the company was restructured. The stock is up nearly 50 percent since the equity listing and is currently Highland Capital’s largest position as highlighted below.

Dondero is always looking for what he believes will be the big themes of the future. Recently Highland started making private equity investments in wind power and non-opioid pain medication companies. They are also investing in real estate when they believe land is cheap relative to the cost of finished developments.

Highland Capital's stock portfolio totals $2.2 billion according to the latest filing. The list value of stock holdings is down -4.0% when compared to the last quarter. As a benchmark, the S&P 500 was up 6.1% over the same period.

The Ideas section of finbox.io tracks top investors and trending investment themes. You can get the latest data on the holdings discussed below at the Highland Capital page. The following table summarizes the firm's largest holdings reported in the last filing:

The seven positions above represent 33.1% of the fund's total portfolio. Vistra Energy Corp (NYSE: VST) is by far the firm's largest position and currently makes up 12.3% of the portfolio.

The largest purchase for the quarter was in the NASDAQ Biotechnology ETF. Highland Capital increased its position in the ETF by $24.6 million. The next largest purchase was Enterprise Products Partners L.P. (NYSE: EPD). The investment manager increased its position in the company by $24.3 million with the stock now representing 2.2% of the firm's portfolio.

The next ranking table lists the stocks in Highland Capital’s portfolio with the best dividend yields. Dividend seekers can appreciate stocks that earn upwards of 6% excluding price appreciation and are also backed by a prominent investor.

Managers with more than $100 million in qualifying assets under management are required to disclose their holdings to the SEC each quarter via 13F filings. Qualifying assets include long positions in U.S. equities and ADRs, call/put options, and convertible debt securities. Shorts, cash positions, foreign investments and other assets are not included. It is important to note that these filings are due 45 days after the quarter end date. Therefore, Highland Capital's holdings above represent positions held as of December 31st and not necessarily reflective of the fund's current stock holdings.