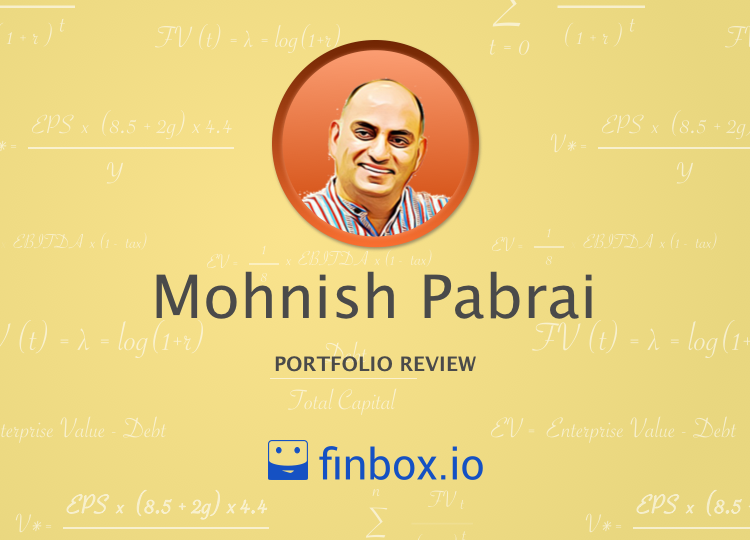 The 5 Stocks In Mohnish Pabrai’s Portfolio

Betting First On Himself

Mohnish Pabrai is a former tech entrepreneur and managing partner at Pabrai Investment Funds, a family of funds for high net worth individuals.

Pabrai was born in India and moved to the U.S. to attend South Carolina’s Clemson University. He worked at Tellabs for five years starting in 1986, before founding an IT consulting company, TransTech, Inc. He funded the company with money from his 401(k) account and credit card debt. Nine years later, in 2000, he sold the company for $20 million.

Pabrai used that money to start Pabrai Investment Funds, a family of hedge funds which are structured in a similar way to Warren Buffett’s original partnerships. The Pabrai funds are specifically targeted toward individual investors with a long-term time horizon. The minimum investment is $2.5 million, and money can only be redeemed once a year. These limitations are in place to discourage investors who may want to withdraw capital during a market downturn. Pabrai’s actual performance is not disclosed, but it’s believed his funds returned 30% on average per year between 2000 and 2010.

In 2004 he published Mosaic: Perspectives on Investing, which distills the Graham and Buffett investment philosophy into a holistic approach to company analysis. In 2007 he published The Dhandho Investor: The Low-Risk Value Method to High Returns. The book lays out a framework for value investing specifically for individual investors.

In 2008, Pabrai and another investor paid $650,000 to have lunch with Warren Buffet after winning a charity auction. He is quoted as saying the experience was “worth every penny.”

Value Investing for Everyone

Pabrai is rapidly developing a cult-like following, and many have called him the next Warren Buffet. One of the reasons for his large following is that he grants interviews more often than many other investors, and even publishes thoughts and ideas on his own blog. The other reason is that he has consistently outperformed the market since 2000.

Pabrai believes investors should only invest in companies they understand, that have solid management and that have a competitive moat. He also invests in tech stocks, something Buffett hadn’t done until recently. His funds are very concentrated, and each fund often holds just five positions. Although the funds are called hedge funds due to their partnership structure, Pabrai does not hold short positions.

Mohnish Pabrai has created a checklist that he uses to filter potential investments. The checklist has over 100 criterion divided into categories including leverage, durability of the moat and management quality.

His turnover is very low, in 2017 he made no new purchases and sold just one stock. This is one of the reasons he doesn’t manage money for institutions. He believes that institutional investors will pressure managers into making changes to a portfolio to justify their fees.

Since 2016, Pabrai has published an interesting strategy called the ‘15-Stock Free Lunch Portfolio’. The portfolio consists of three groups consisting of five stocks each. The first he calls ‘Uber Cannibals’, companies that are aggressively buying back their own shares. The second group is ‘Shameless Cloners’, stocks that respected stock pickers own. And the last group are ‘Spinoffs’, companies that have been spun out of larger corporations. Pabrai believes that the combination of three different strategies and 15 stocks, provides enough diversification to hold the portfolio for 12 months before the stocks are replaced with another 15 stocks.

Pabrai is not afraid to ‘borrow’ ideas from other investors. He says his primary source for new ideas is the 13F SEC filings of other managers. Funny, because I take a peek into his fund's current holdings below via a 13F filing.

On November 14th, 2017, Mohnish Pabrai's firm Dalal Street filed their quarterly Form 13F regulatory filing. Dalal Street's portfolio totals $412 million according to the latest filing. The list value of stock holdings is up 2.1% when compared to the last quarter. As a benchmark, the S&P 500 was up 3.9% over the same period.

The Ideas section of finbox.io tracks top investors and trending investment themes. You can get the latest data on the holdings discussed below at the Mohnish Pabrai page. The following table summarizes his firm's largest holdings reported in the last filing:

Managers with more than $100 million in qualifying assets under management are required to disclose their holdings to the SEC each quarter via 13F filings. Qualifying assets include long positions in U.S. equities and ADRs, call/put options, and convertible debt securities. Shorts, cash positions, foreign investments and other assets are not included. It is important to note that these filings are due 45 days after the quarter end date. Therefore, Dalal Street's holdings above represent positions held as of September 30th and not necessarily reflective of the fund's current stock holdings.