While Berkshire Hathaway’s (NYSE: BRK.B) up-and-coming investment managers have shown a willingness to invest in technology-related stocks, Warren Buffett has historically eschewed the sector. Buffett explained his reasoning in his 1993 letter to Berkshire shareholders:

“Sometimes our own intellectual shortcomings would stand in the way of understanding, and in other cases the nature of the industry would be the roadblock. For example, a business that must deal with fast-moving technology is not going to lend itself to reliable evaluations of its long-term economics.”

Because of the rapidly-evolving nature of technology, tech-related companies can make business economics difficult to forecast. What’s more, today’s popular technology stocks, the so-called FANG’s (Facebook, Amazon, Netflix, and Google) don’t appear to offer much of a margin of safety at current prices anyway:

Buffett’s tech-averse philosophy has even been adopted by some of his better-known investing disciples. A self-described Buffett “clone,” value investor Mohnish Pabrai states:

“For me, any sort of tech investment is a very fast, five-second pass as they tend to be unpredictable, rapidly changing businesses.”

Buffett and his disciples tend to prefer simple businesses and Berkshire’s portfolio has been proof of that. From Fruit of the Loom to Dairy Queen, Buffett invests in tech-resistant businesses that make the task of forecasting cash flows easier:

"We'll stick instead with the easy cases. Why search for a needle in the haystack when one is sitting in plain sight?"

Beverage cans represent the lion share of Crown’s net sales (58%) while food cans and closures represent 27%. The Americas Beverage segment leads all segments with 33% of net sales, and developing markets account for 38%: 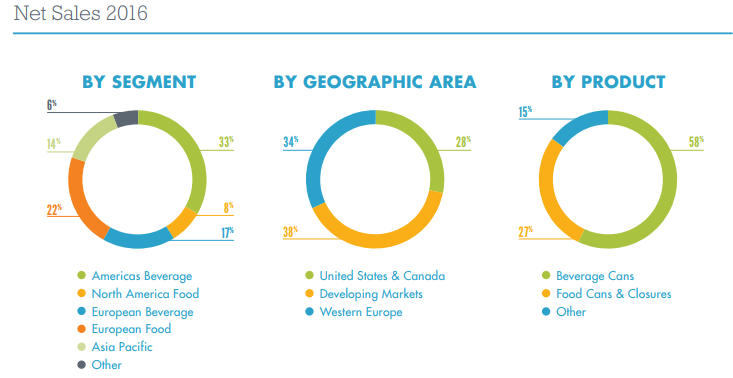 In all, 77% of Crown's $8.3 billion of consolidated net sales are from international operations.

Crown announced an acquisition of Signode Industrial Group in December for $3.9 billion. Signode is a leading manufacturer ($2.3 billion pro forma sales) of industrial packaging systems and packaging tools and equipment. As such, the move will help to diversify Crown’s revenue base.

Crown announced $1.41 in adjusted earnings per share on $2,468 million in net sales (up 4% on a currency-neutral basis) in its third-quarter call. Sales were up on higher volumes across all products and the company was able to pass through higher material costs. Global beverage volume was up 2%, helping offset operation disruptions from natural disasters.

In Buffett’s 1993 shareholder letter, Buffett also references a quote by another legendary investor:

“As Peter Lynch says, stocks of companies selling commodity-like products should come with a warning label: ‘Competition may prove hazardous to human wealth.’"

Cans appear to be pretty commodity-like, so does that mean Crown is without a competitive advantage, or as Buffett calls it, a “moat?” It doesn't appear so.

One aspect of the canning business is that expensive shipping costs make it difficult for new entrants. Given the amount of space individual cans take up, shipping is not very efficient. Long-term contracts and fairly stable demand also make it hard for potential entrants to seize market share.

These dynamics appear to be confirmed by Crown's return on capital measures. Crown boasts a 13% return on invested capital, which compares favorably to the sector (6%): 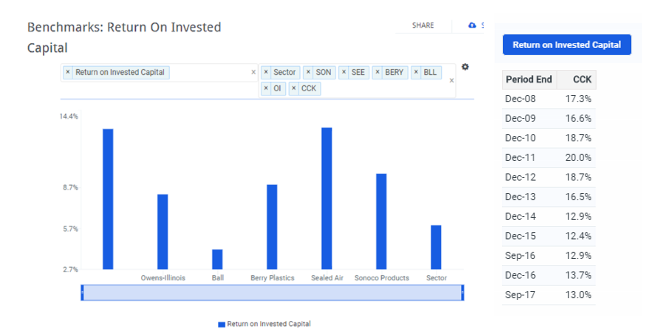 Turning to Signode’s businesses, the newly-acquired company also appears to have some favorable moat-like characteristics. Given the nature of its packaging systems, switching costs for Signode’s equipment (and associated products) appear to be significant.

Crown looks to earn top-line growth from emerging markets where the company is either the market leader or holds a strong presence. As such, Crown has invested in its production footprint, adding lines in Vietnam and new facilities have been on tap for Mexico and Myanmar.

Over the next several years, Wall Street analysts project declining, low-single-digit revenue growth. EBITDA is expected to expand marginally over that period:

Using these assumptions across eleven of finbox.io’s valuation models gives a $68.54 estimate of fair value: 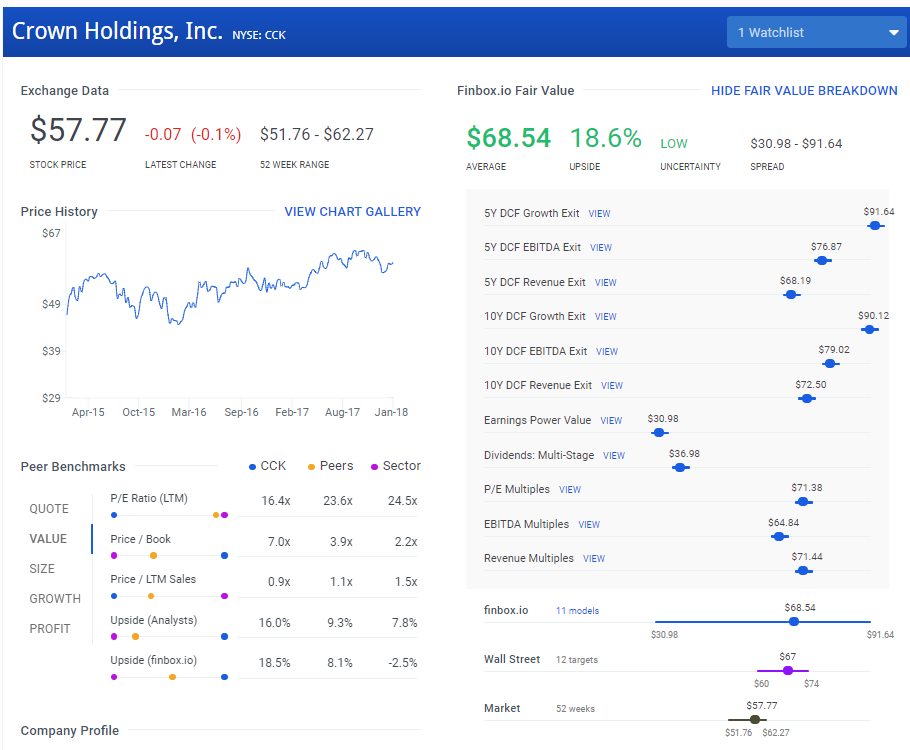 This implies almost 19% upside to Crown’s stock at current trading levels. Crown’s board of directors also authorized a $1 billion repurchase program in December of 2016. As of the latest quarter, there was still $661 million available for repurchase.

Demand for beverage and food products are, of course, directly related to consumer income levels. A weakening in global economic conditions, particularly in emerging markets, could negatively affect performance.

Consumer behavior trends could also negatively affect results. However, favorable trends such as craft breweries turning from bottle to can packaging could work to offset.

Crown Holdings appears to be the antithesis of a rapidly-changing business, or one typically susceptible to technological disruption. Steady demand and the tech-resistant nature of the food and beverage storage business permits investors to anticipate business economics for years to come. Long-term contracts, as well as high shipping and switching costs, appear to give Crown's businesses some degree of protection from potential entrants to the space as well.

With developed markets showing signs of saturation, emerging markets will likely drive revenue growth going forward. Share repurchases and expanding margins look to drive the stock towards its intrinsic value. With nearly 20% upside, value investors may want to give Crown Holdings a closer look ahead of earnings next Wednesday.